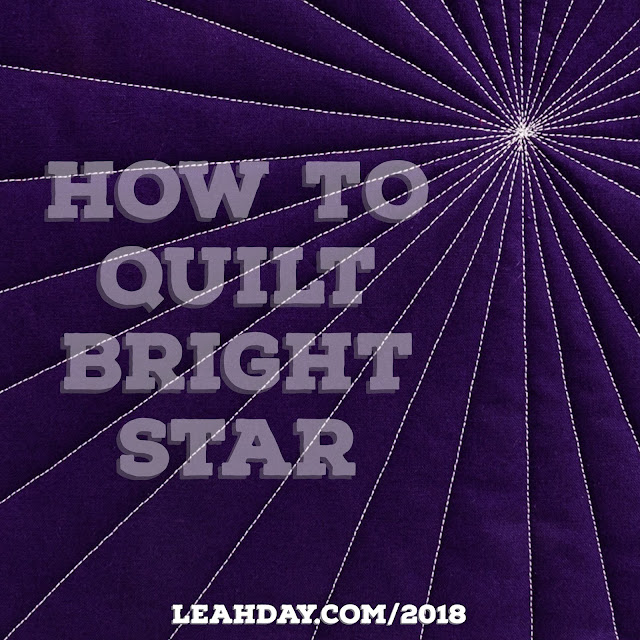 Her procedure uses tape for the marking of the lines.  After determining where the center is, she starts each spoke in the center and goes out to the end.  So for each spoke there are two threads ends that need to be tied off and hidden.  She says the center spot will build up after a while so she suggests starting a few stitches beyond or ahead of the center so there will be different starting points.  Here is an image of her idea of putting several pieces of tape down, then removing them after a spoke is completed. 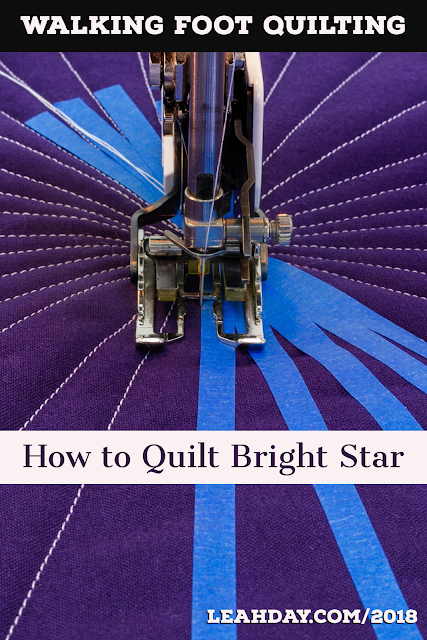 I made an example block and was really pleased with how it looked.
Post: https://quiltquest.blogspot.com/2018/02/leah-days-explore-walking-foot-quilting_4.html

But now that I have finished my second try in my quilt, I knew I had to rethink how I did the design. I just did not like the way the center looks, especially on the back.

I'm happy to report that my new way works - at least in a single block.  I will need to put in a quilt to see if the additional twisting of fabric is doable in a larger piece, but I do believe if I go slowly things will look nice.

So here are my three examples.  You can see the thread in the center example looks a lot cleaner than the other two (or at least I can in person).  I believe you will be able to click to further enlarge the photos.  On the right you can see where I started the stitching beyond the front as I thought it would match with the other spoke and be hidden.  I did this several times, but in the one instance it didn't match.  (I probably didn't understand what I was supposed to be doing.) Because I was hiding the threads after each spoke was completed, I think this would be really difficult for me to fix.


Here is what the backs of those blocks look like:
This is more difficult to see as my backs have so many fabrics, but still I think it's clear that the center example looks the cleanest.

Here is what I did differently.

I used tape to mark from the outside to the center point.  Then I picked another outside point and used another piece of tape to mark going from that point to the center, being careful to arrange the tape so it would not need to be lifted until the two spokes were sewn.

So to get two spokes sewn with one pass of the machine was easy.  I started at the outside, brought the bobbin thread up, and sewed to the center.  Kept the needle down, lifted the walking foot and turned the quilt so it was oriented correctly.  Then I just sewed to the end of the second spoke. 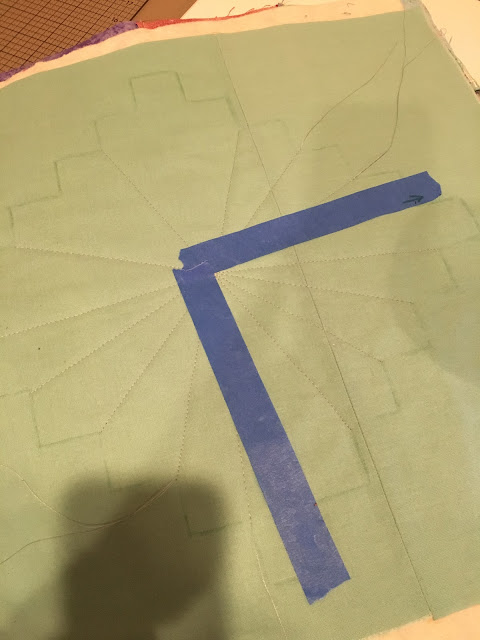 After a few times I marked a little dot on the tape pieces to show where the starting and ending point would be and that helped since my sample block does not have piecing seams to use as starting/ending points.

I saved time by only tying off and hiding the threads after a 4 or 5 angled lines (8 or 9 spokes) were completely sewn.

There was perhaps more stopping and starting as I had to tape/mark again after completing the two spokes, but I halved the number of thread breaks so there were fewer threads to tie off and bury.

It seems to me this is going to work!

The back and the front of the block will be very neat looking in the center. 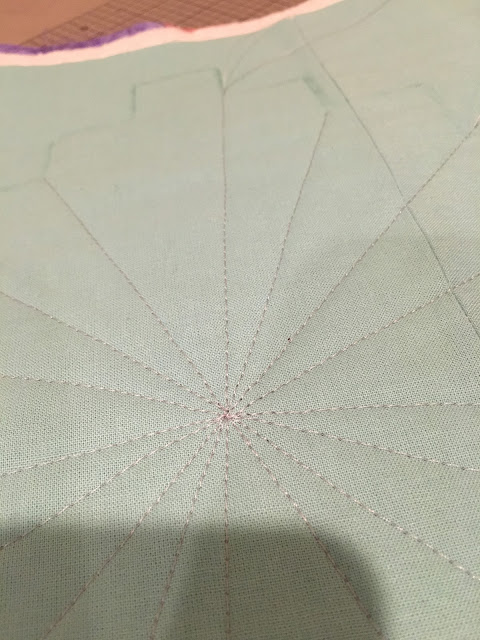 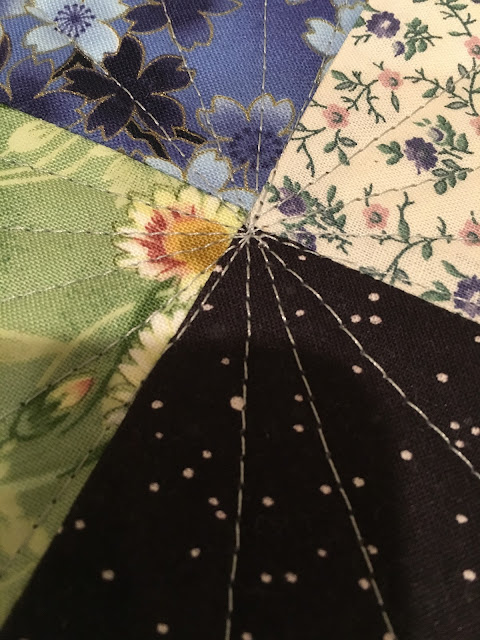 Like I said, this procedure works for an individual block.  I'll be testing tomorrow on my real quilt to see how it goes with having to move an entire quilt around while stitching the design.

Well, now I have a few more quilt block sandwiches prepared so I can continue with the Leah Day's Marvelous Mosaic Quilt.

It's the first of the month so I know what the new color will be for the Rainbow Scrap Challenge (gold and yellow). I found a fun way of using my rainbow scrap challenge strip blocks - from Sweden no less!  http://kviltstina.com/2015/05/tutorial-for-january-scandibee-quilt-or-sort-of/  I'll have to start making neutral strip blocks too.

It's the first Monday of the month so I have the new April pattern from Alida for the Starry Bright Sky QAL.

I'm pleased with the progress I have made on my sewing projects.  Even considering posting a One Monthly Goal at Elm Street Quilts.  What to commit to?  I'm thinking...

Having friends over here for dinner tonight, already did some weeding this morning, and read 30 minutes too.