I'll be making a few things thru the Crafty Gemini site.  Her directions are so clear, it will be nice to have items that I can use or give away right away!  As part of the 2018 Bag Club we will be working thru ten projects at rather a fast pace as she is thinking we will be making Christmas gifts to give away this holiday!  2018 Bag Club: https://craftygemini.com/shop/2018bagclub/  I'll do what I can to try and keep up.  But will have access to the lessons and patterns after the timed events, so I feel good about making the commitment to the sewing classes.

She recently posted a video about different types of interfacing and stablilizers to use in bags:
https://craftygemini.com/2018/10/bag-making-commonly-used-interfacings-stabilizers.html
Very interesting.  I was going to get all my special supplies from Vanessa, but she said she did not have a master list of supplies needed for the different bags so I couldn't just order everything ahead and at once from her.  So I just went to Walmart to get what I needed for the first project.

I found similar interfacing/stabilizer to what she mentioned, but not the same manufacturer... 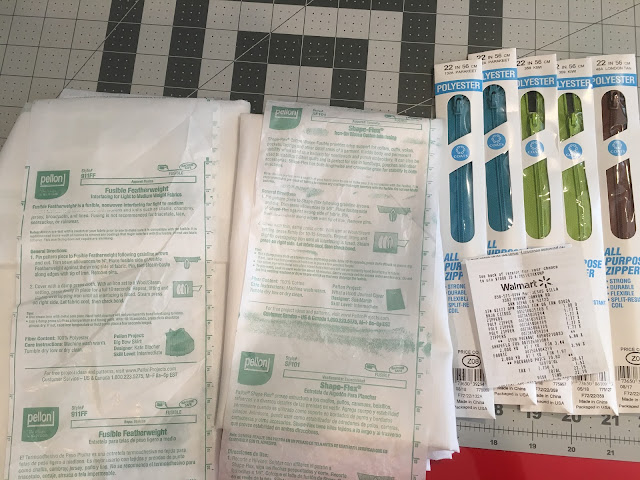 She recommended woven cotton interfacing. I had never noticed this stuff before, but looking at her video it looks very nice to work with.  I got two yards of that, and two yards of the light polyester interfacing that I believe I have used before.  My plan is to make several of the zippered bags using different interfacing in each.  In addition to these I am going to use felt and batting.  We'll see how they turn out (and when I get them done).

The first little project (Over-Under Pouch) has a woven top so I will get to use my wefty needles again.  Hopefully, with more success than last time...!  I know I can create the larger bag, but not sure if I will be able to do the design for the smaller over-under pouch.

We have been using Teresa's blocks for the textured four patch blocks, but I found this video and it caught my eye. I thought it would be a fun additional block in the quilt... so made one with my blue and yellow fabric!
https://www.youtube.com/watch?v=nAilV_i2c6c

To enlarge the block and to make the block square, I added the extra strips. Very fun block to make! 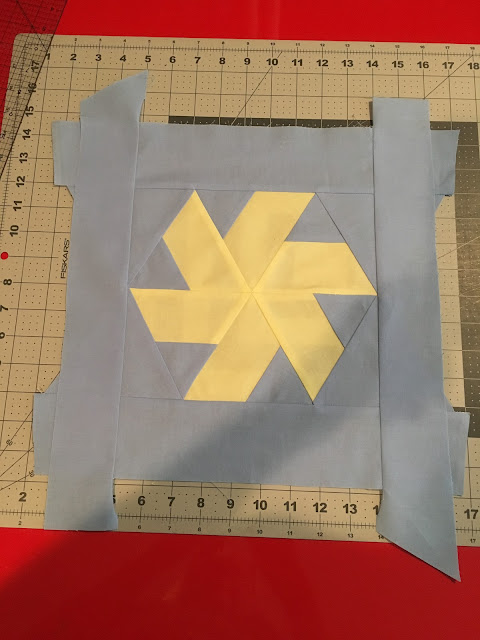 Hmm.  Alida hasn't updated the website yet, but she did send out the patterns for the month.  This time the technique is embroidery. The pattern has directions for different ways to mark the design and how to do different hand stitches.  But as always it's open to interpretation...

I cut my star shapes out of freezer paper, then pressed them where I wanted them to appear on the block... 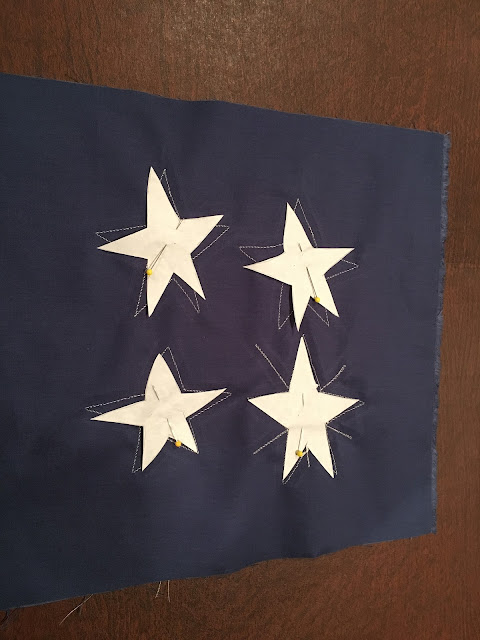 Then I referred to my sewing machine manual and found a stitch I thought would work to make the stars stand out.  (I had gone to a quilting shop, but they did not have any 12 weight thread in grey! So I decided to make use of what I already had).

Sewing Machine Manual download link:
http://download.brother.com/welcome/doch000470/bc21es20cs60ce50ex66xr6677ug10en.pdf
I used stretch stitch 03 with the default settings.  When I was looking at the manual I didn't notice the name.  It was a nice sharp repeating design that made the stars stand out using regular thread so it fit my needs of making the regular thread stand out and appear thicker.

I completed the stitching in a short period of time.  Was originally just going to do one star, but it went so quickly I continued until I was done. 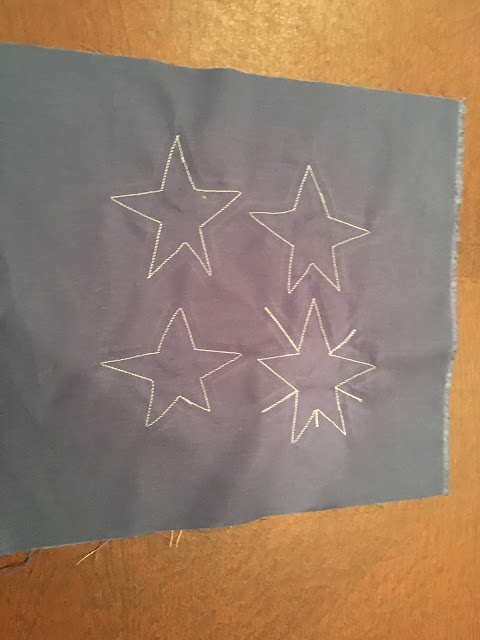 I used my clover 'cheater' needle to bring the threads so they were all on the back.  Tied the pairs up with two knots and then left the thread long as I am not sure how short I should cut them.  I guess it's good the background fabric is so dark...  For the thread I used the Isacord Polyester Thread that Leah Day recommends for quilting. I'm not sure if that is what I'm supposed to be using for this kind of stitching.  I use cotton thread when piecing though. 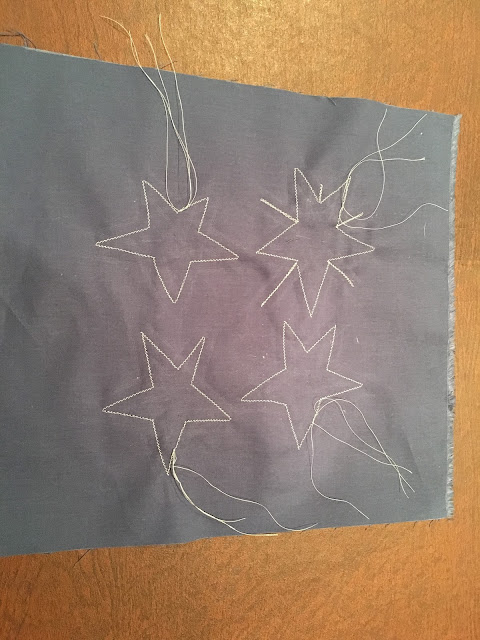 Update:  Alida has updated her blog now!  The link to see how others are interpreting the block is:
http://alidatweloqdesigns.blogspot.com/2018/10/starry-bright-sky-qal-linky-month-10.html

I'm not sure how this will be quilted in the final quilt.  Sometimes wish I was doing these all Quilt as You Go so the stitching would already be in the batting.  Oh well.

I have found at least two other pieced star blocks that I'm going to make to add to the Starry Bright Sky QAL quilt - they will be posted soon!  I have done most of the blocks Alida has prepared, so may go back and do more of them.... Or maybe will go ahead and try to create the final block, it's sort of a New York Beauty block but looks to have blunt ends instead of a lot of points.

I started with a selection of blues and yellows for this project and have just been grabbing what was handy really when preparing the blocks. Handy meaning piecing that were already cut in strips or sizes that would still leave me with larger pieces of fabric.

Sewing with Friend in Two States

I visited my sewing friend and we worked together to create this little back pack for her granddaughter to where for Halloween. 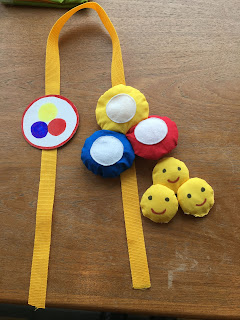 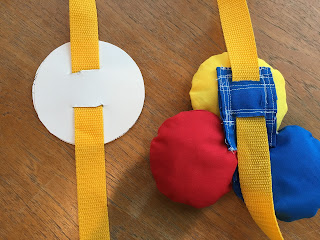 We didn't have a pattern.  It goes along with a cartoon the girls likes called True and the Rainbow Kingdom.  We found images on Pinterest, but had to watch an episode to really understand how the gizmo works.  Supposed to be the circle wishes are inside the squishy circles, and when the button on the front white circle are pressed the wishes are released.  My friend figured out the system for adjusting the location of the backpack and front piece.  I mainly sewed what she handed to me.  I will offer to send my Gay Pride Parade Tutu to add to the costume.  Hope I get a photo of the little girl on Halloween!

The second project we worked on was putting the mitered border on this quilt (she had already made the center section).  Then there was sandwiching the piece, basting, and preparing the binding.  She had only done binding made with the backing before.  We started in Rhode Island, then finished in Massachusetts!

Ruth Jensen's method for Mitering Borders was really easy to follow:
https://www.youtube.com/watch?v=-m22mnu4ovM
The other sites we found started by marking the 1/4 inch outer squares - which was really hard to do accurately.  Ruth suggests simply sewing on two opposite sides of the border, then using that stitch link to guide adding the top and bottom pieces.  It's a short video - watch it for help!

For the binding, I cut the strips 2.25 inches wide and referred her to Laura of Sew Very Easy Binding:
https://www.youtube.com/watch?v=r8qzeOczXEo
The start and stop was easy, the way she does the corners really works too.

We both didn't remember how much time it would take for her to do the FMQing, so I ended up making a little example of something to bind as a demo - then I pinned the binding on the piece and then pretty much had to leave her to finish it on her own.  She did a wonderful job.

Isn't it cute the way the sharks are circling the quilt? 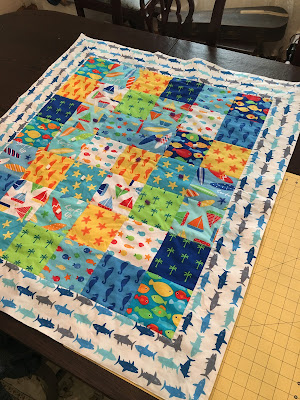 She went back and stitched around all the blocks after applying the binding. 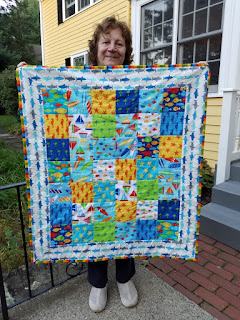 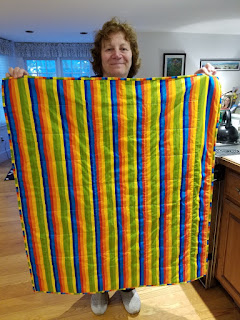 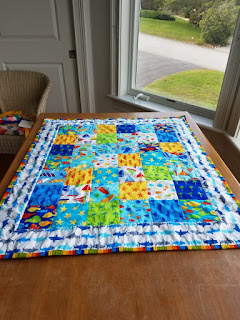 She had asked me if she should wash it before giving it away and I had said to wash with color catcher and regular soap in cool/medium temps or to give with the color catchers and directions for washing.  She decided to wash, but then was worried it was too wrinkled so she asked if she could gently iron it.  I had told her I had never done that, but since it was all cotton would be old to do a little.  Was I right?  I hope so!
Posted by June D at 9:20 PM No comments:

I made this purse for my trip to Ireland.  It has a zippered pocket for my passport and tickets.  Two zipped pockets where I put Euros and Pounds.  Outside pocket for phone and glasses.  Inside for sunscreen, external battery - and just enough room for the box deal we rented so we could have the internet where ever we were.  Should have had room for two external batteries (phone and internet deal) and if the inside were just 1/2 wider would have been easier to put travel brochures in. I guess it would have been nice to have spot for sunglasses all the time too.... 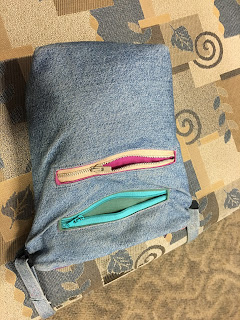 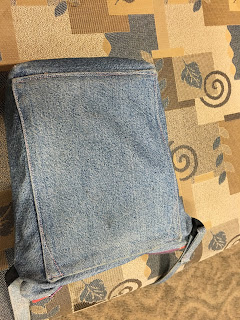 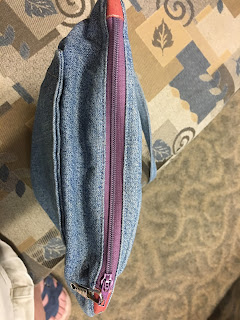 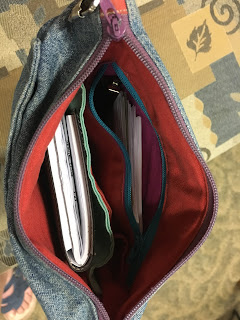 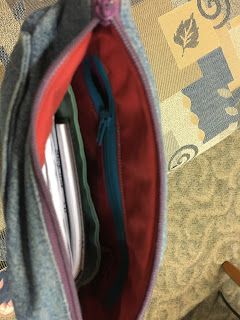 The links I used for help are listed here:
https://quiltquest.blogspot.com/2018/06/i-made-purse-for-ireland.html