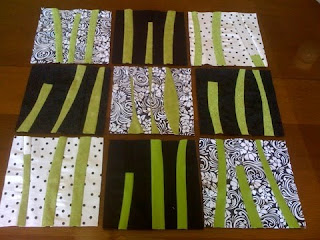 Since I have won the last two months I am donating my blocks to the lottery (I'm lusting after them though). They will make a really modern quilt! ...and the lime green would be perfect for the Karl and Heather wedding quilt.....

I finished my blocks up during the week before May (my reward for sending in blocks before the deadline was getting to see the directions early).

I think I have mastered this block now - but when I was first making it I was fretting about the curves and if it was going to be flat.  I put a warm iron on the block and turned it off - then left that over night - that seemed to do the trick.   I used four different backgrounds and three different greens.  It was easier to sew on the plain kona cotton than the print material. I used a paper template to create the block in the middle - the rest were free cut with rotary cutter.
Posted by June D at 9:47 PM