Well, this is my first shared video on my blog.  We got some fun lights at Costco - I put one strand on the tree.  In the video you can see the one strand goes from multi-colored to white then back again.  The other new thing I got this year from Costco were some wireless remote plugs.  I first put the new plug in the outlet, then plug in the lights.  It made it very simple to turn the lights on the tree, and the house, on an off.  Next time I share a video I'll make sure the action is not under the arrow! 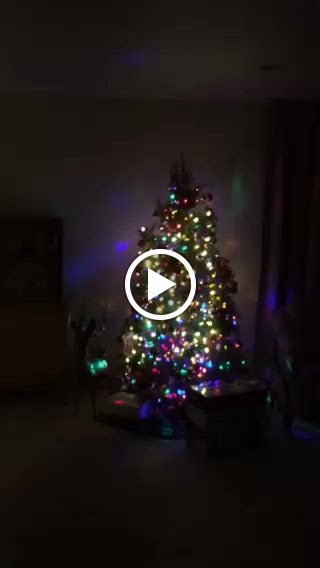 This year when undoing the tree and lights I wrapped the lights in Christmas wrap and labeled them to remember where the lights were used.  I lost track of the number of strands that were on the tree, but it was nice and bright.  I'm giving away all the lights collected over the years by my folks and us via freecycle!

We decorated a lot this year, or at least it seemed more, as it was a year where we hosted the department and class party.  It was nice to have the house fixed up again.  Our son and his girlfriend came to one of the parties and I found out then that she was going to her family for the holidays. So we just had our son here for that.  It was a nice couple of visits.  We played board games and watched Endeavor on TV.  No Dr Who, but we recorded that to watch later.  We also had some friends from our son's high school over.  We cooked meals together and chatted.  Will be having them over again to cook and play games again.

I'm back now to boxing things up so we can have the new carpeting installed, but now I'm thinking I may want to go ahead with a few changes to the kitchen first - that seems a better order to do things to me...

I am blocked now from sewing as either projects are boxed up, or I am waiting to move my sewing to an upstairs room and to move the bedroom furniture from there to the first floor.  I'm hoping to have some house guests this year so want to make sure they have a nice set up on their own floor!

For sewing in 2015 I'm going to be sewing for Quilts for Kids -  that group meets twice a month to sew together for the kids.  I'm going to attend the adult ed class for quilting on Fridays. Then I will have at least one day of sewing for my projects.  I'll get things organized once the furniture is moved, and especially after that upstairs room is cleared out and can be totally and only for sewing!

My dear Mom passed away in November, last month.  These last years we had good times together.  I got a ramp van, took her to the university for exercise several times a week and took her to have her nails done. Found a close by beauty college so she would have her hair done one day, her manicure on another day and her pedicure on another.  Some weeks we do it all, and sometimes would alternate with manicure and pedicure.  For a few years we also went out to lunch and/or shopping for one day each week.  I really don't like shopping, but she liked it so we did it.  I have wonderful friends that would visit her and take her out so my husband (and sometimes son too) could go away on trips.  My mom would be afraid I wasn't returning, but my friends comforted her and let me know how things were going.  I know my mom would have been happy that I was getting to have the foreign experiences if she had been more aware.  It's very different with the passing of my mom, and I'm having some sad days or days all I do is stare out the window thinking about only what I'm looking at or sleeping.

I miss our times together and just hope I spent enough time with her.  I know she would have liked going shopping more.  I would have liked preparing more meals with her and by the time I was experimenting with sewing she had finished with that kind of detail work.  I was late to adopt sewing and cooking - too late to do with her.  But it would have been fun for both of us to do that together.

I received so many nice cards or emails or calls - from family, from friends, professors and unexpectedly from friends of my sons.  Very nice people.  One said I heard your mom passed away. I'm so sorry. I hope you are feeling okay.  Another I was sad to hear about your mom's passing. My thoughts are with you and your family. From everything my parents said, you were there for her in every way possible.  I've always sent cards, and sometimes visited after someone passed away, but until my Mom going didn't realize how comforting those cards were.  It was especially nice to hear from my son's friends or children of friends.  Well raised people, I'm lucky to know them.

My Father loved to play games and pretend.  He would read books to me and listen.  My mom would take me to so many classes - she really looked out for me. And oh she could sew!  I remember the first dress she made for me.  Turquoise and white - she made it like a paper doll dress.  Just cut the shape out, sewed the front and back together and them put bias tape on all the openings.  I wouldn't have noticed that myself, but I remember her talking to other ladies about it.  She followed  pattern and made one for herself with  regular facings, darts and hem - but I always thought my paper doll dress was the best.  I have the last things she made for me.  Beautiful tailored jackets, vests, pants and skirts.  I felt like Princess Diana when I wore them.  I'm way too big now to put them on again, I've kept them though just in case there is a granddaughter someday I guess.  From what I've seen, once the girls hit high school they are too big to think of wearing my old clothes.

The night she passed away I told her how she gave me so many good memories and how I appreciated her and loved her. I asked her if she could hear me and she moved her head a little.  Then my husband came and said hello to her - we then sat down and talked to each other a little loudly to be sure my Mom knew she was not alone.  I asked my husband how much something was going to cost and I heard my Mom take two deep breathes, then there was no noise.  I waited for my husband to finish his answer and said I thought she was gone.  We confirmed to each other.  Then waited for the caregiver who really cares to be free and I caught her in the hallway, she came in an confirmed. She removed the pillow from under my mom's knees and closed her eyes.  Then she made the calls to hospice so they knew.  A nurse from hospice came and confirmed, then they called Telophase.  I think it was about an hour after she passed a way that he came.  I said my goodbye and we left - walking to the store as I recall.  She was gone when we returned - he had suggested we leave as he had to sort of wrap her before putting her in the back of his car - I think it was a van - I can't remember.  It's hard for me to write about this, but I'm writing it so I will remember later on.

Going thru boxes in the garage I'm finding stacks of letters I wrote to my folks.  I had forgotten I had written them so often.  My mom was organized and gave them to me shortly after I got married.  I remember she said I probably wanted to dump them as I often was writing about boyfriends, but I tucked them away so I still have them after reading a few of them.  Maybe I will read them all again, I'm not sure.  Maybe I can remember what I was thinking back then!  I'm afraid I was not as organized and do not have the letters they wrote to me.  I also found letters that I wrote to our son when he was little - guess it's time for me to pass those on to him.  Hope he will read them!

So it's been a different holiday season for me - but I'm starting to make plans for what to do for the next few months... 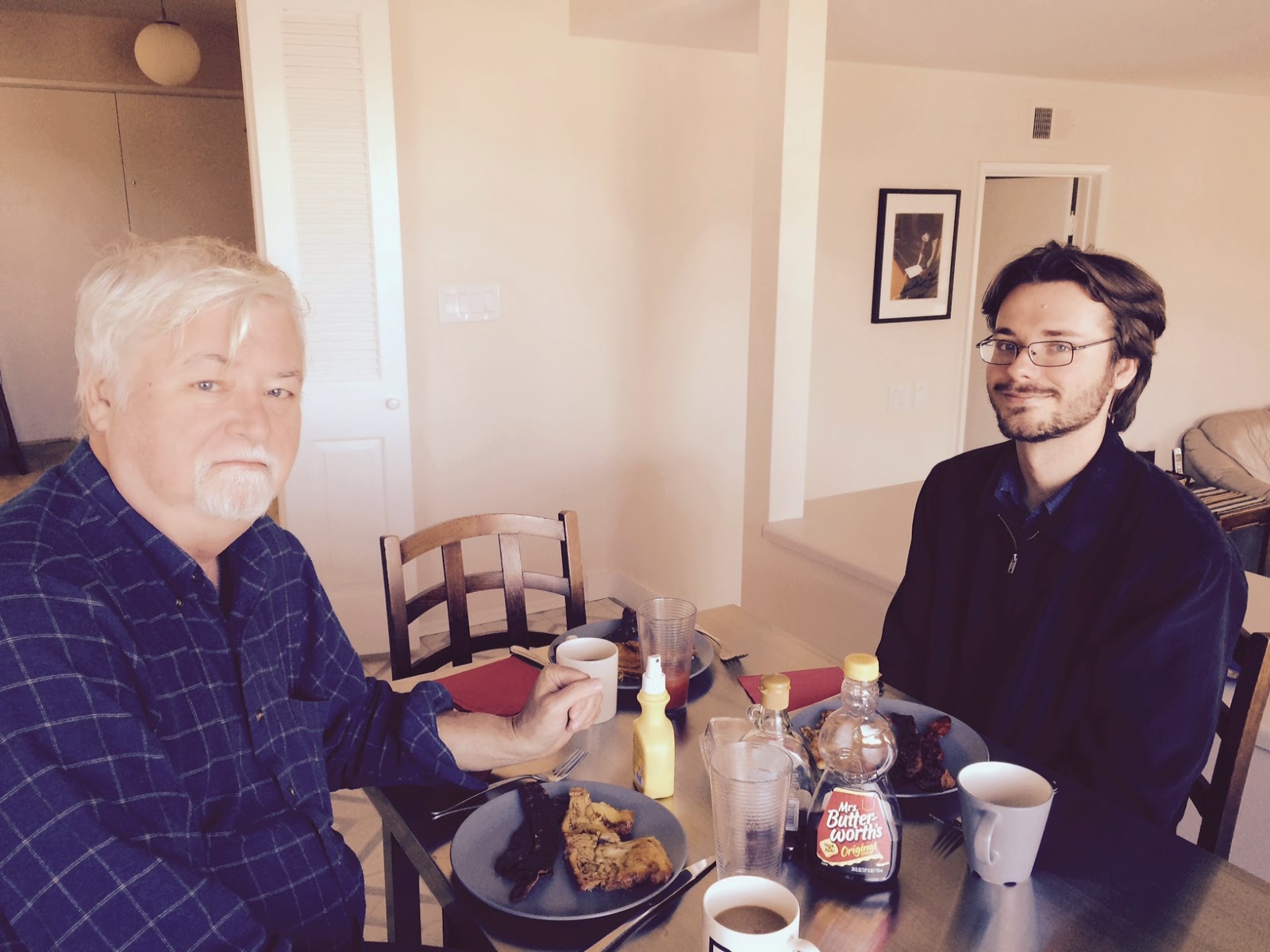 
I received the 100 Block magazine, and had fun going thru picking blocks I was interesting in trying. Thanks again to
Teresa!
http://fabrictherapy.blogspot.com/2014/12/give-away-winners-and-something.html 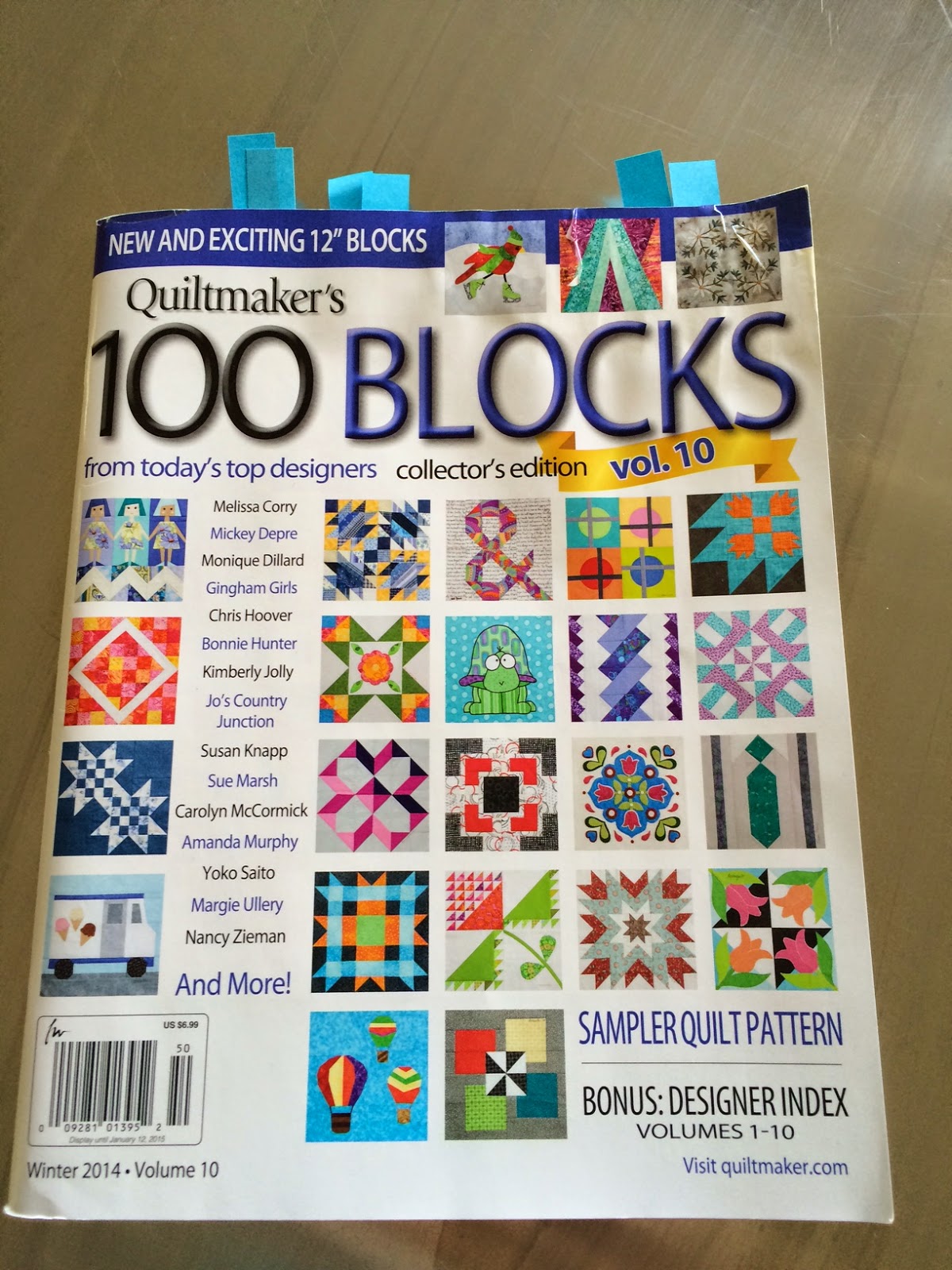 Labels: Give Away, Received 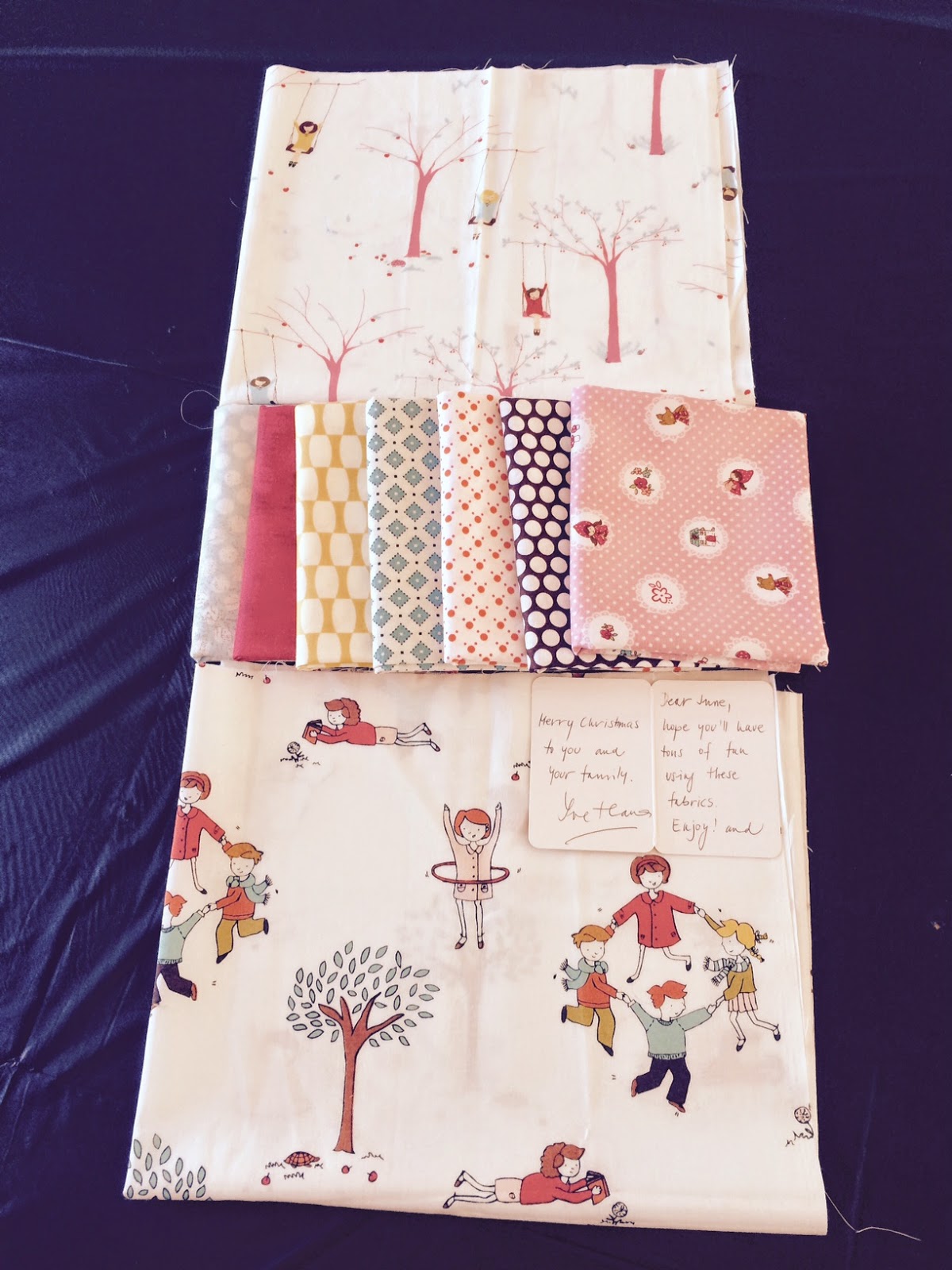 I have received the fabric from the drawing at s.o.t.a.k handmade.  It's even cuter in person!

Thank you so much, Svetlana! Always good ideas from her blog. 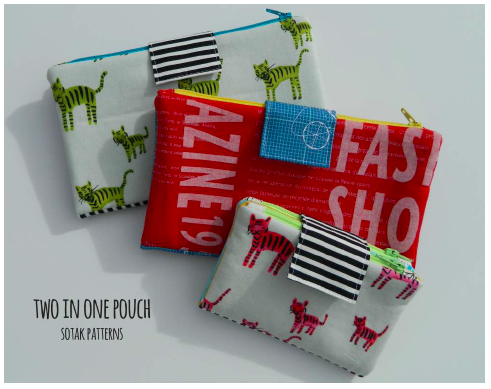 I do intend to make One of Svetlana's pouches, but probably first will make a little quilt for the grandchild of a friend in Sweden, who I just found out about!  The little girls in fabric remind me of the characters in the children's books she mailed my son.

Labels: Give Away, Received


I was one of the winners of this drawing at Fabric Therapy: 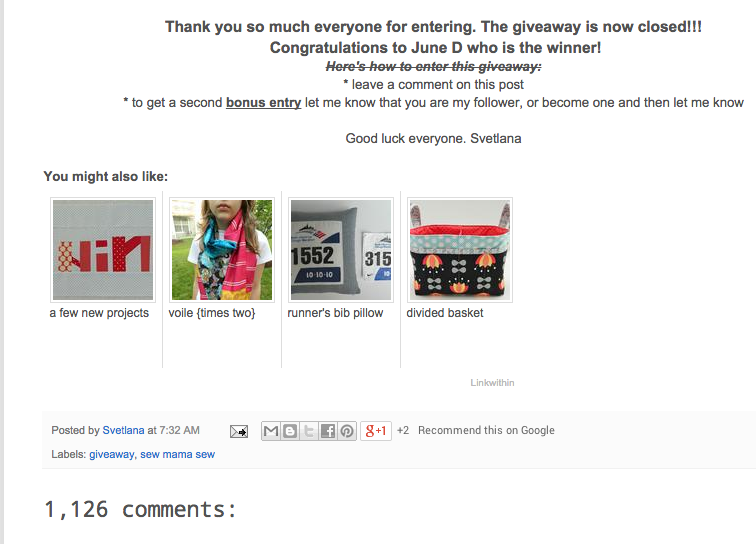 There were 1.126 comments for this nice drawing.  And I was picked as the winner!

I'm happy to say you're the winner of my Sew, mama, sew! giveaway. Congratulations!!!
Please send me your address and I'll have the fabric you won in the mail on Monday.
I've also attached a PDF copy of my Two in one pouch to this email. Enjoy :)
Thank you so very much for taking part in my giveaway. Hope you have a very lovely evening. Svetlana 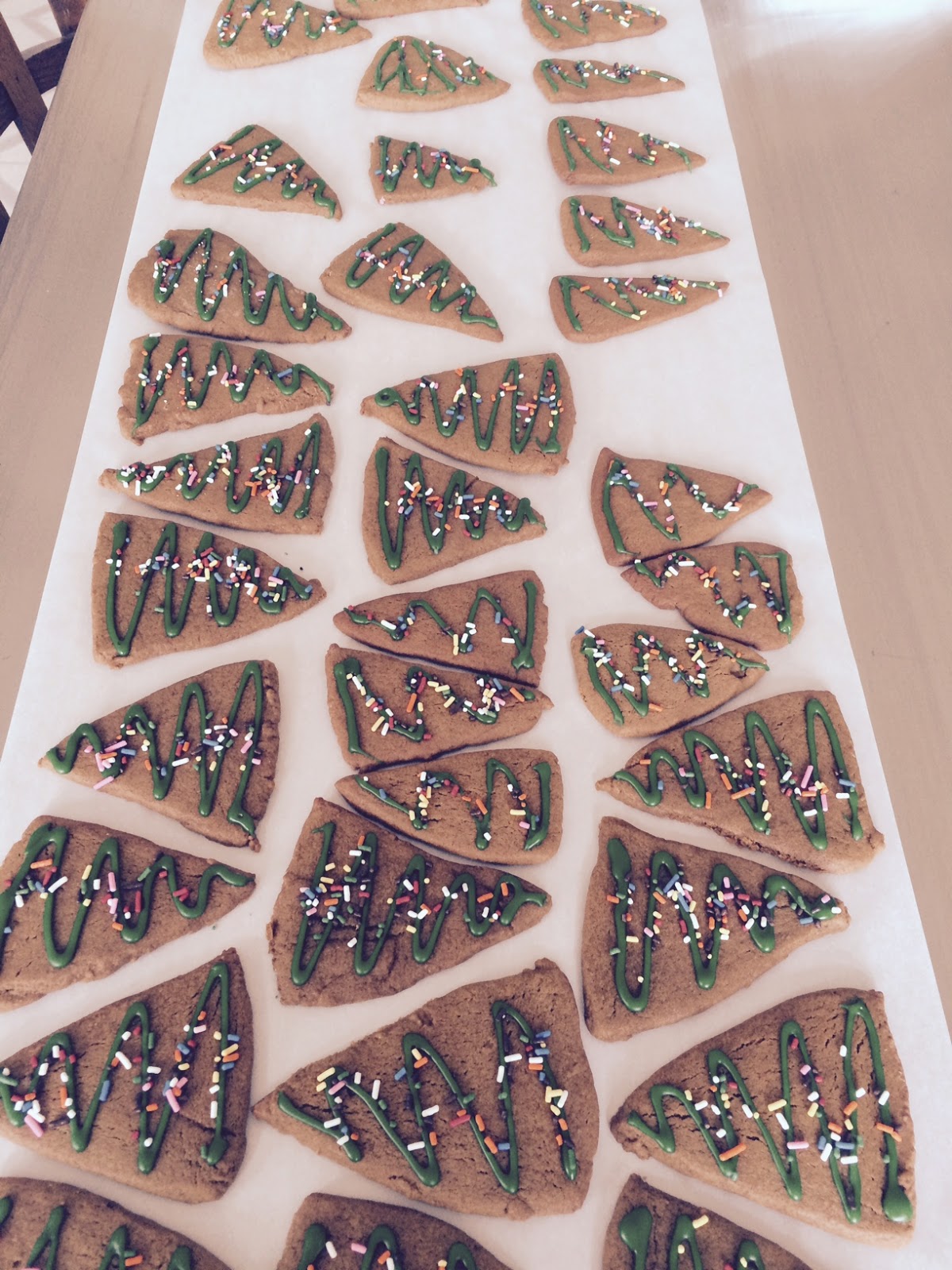 Got the idea from a post on Skinnytaste.com blog.

Also made brownies in mini-muffin tins and starting with sugar cookie mix crushed some candy canes and mixed in half of the dough, then put teaspoon of each dough together and rolled to make a ball - ended up being a nice cookie.  Since I had tossed all my food coloring and peppermint flavoring this was a good way to make them!