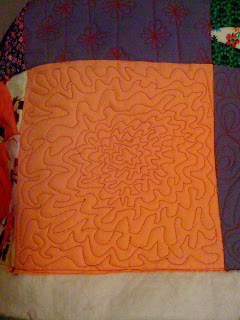 Before:
Watched the video and saw that she did not change the orientation of the fabric while she sewed this center out design.  It's been a while since I did FMQ - we'll see how many needles I break while doing my block!
12:08 AM

After:
The design sewing went a lot better than I thought it would.  I broke the thread one time - but did not break a needle!  Hurray!  Turns out I didn't have the start in the center of the block so I sort of did u-turns to fill in the space.  I don't think it looks like a stomach lining, it doesn't look like Leah's model.  But it is a pretty nice design.  This is my first center out design to FMQ.  12:35 AM 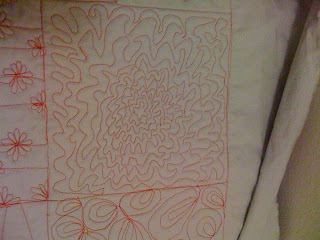 I have now finished another section of the Wonky Shoo Fly Quilt. 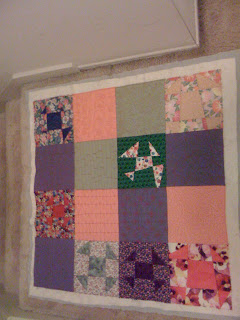 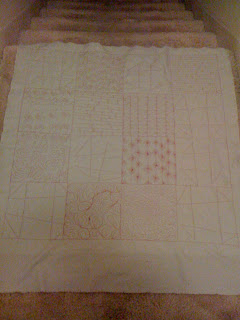 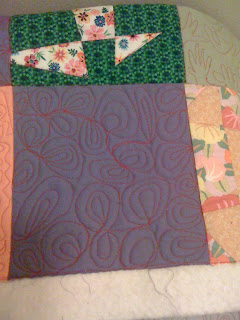 Before:  The directions in the video seemed clear.

After:  I didn't time how long it took me to do the block.  My circles look more like teardrops - but I think it's okay.  I had to travel to fill in all the spaces.  This is a pattern I need to practice more so my circles are really round. 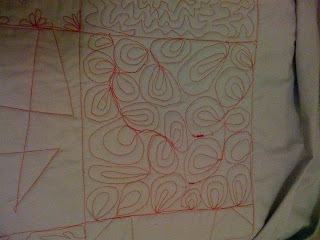 I finally got to the coffee shop in Hillcrest with the fabric art that I wanted to try to replicate or interpret for the third row of the Liberated Round Robin.  The man doing the orders said he thought they came from Latin America.... 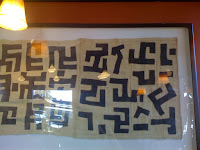 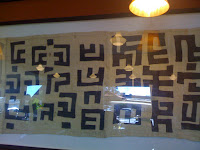 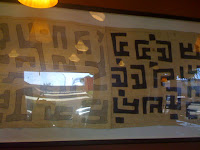 Tomorrow afternoon and evening and night I can sew! I will continue to use the pre-sewn material I received in the Lib-Quilter World Wide Swap... 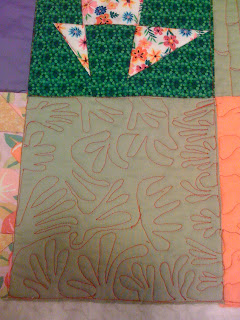 
I watched the video and traced several blocks with pencil.  Well, really two.  It will be difficult to do the center hands, but I like the idea of thinking alien hands while I do the design.

I had recently broken all my needles and found out that I was pulling the fabric faster than the needle was going down.  So I took a little side step and worked on just doing the stitch in the ditch for a few blocks in another section of this quilt.  So I've lost track of bobbins - I know I broke the needle one time, but I don't remember where I was when I did it.... 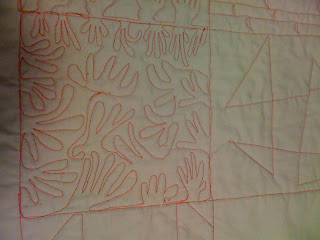 
Again I can't remember where the needle broke - I think the thread broke a few times too.  And the bobbin was catching so the thread broke at least two times.  I have no idea how long it took to do this design...

I don't really love it - but it did get me feeling pretty good about doing this free motion project again, so that's good.

I know I was thinking fingers more than hands... oh well.  When I did the stitching I went around the block then went back and filled it in - the final claw I left so it was all in the middle.

Original Before Note on 7/31/11:
Okay, Leah says she goofed when originally filming Little Hands and Fingers and liked the mistake so is calling it Alien Fingers.
It just goes to show that sometimes your mistakes turn out too good to call them mistakes. Just keep quilting and see what you get.
It may not be what you expected, but it's better than giving up before you've had a chance to see what the design can do.
She says it's for beginners - but based on what happened yesterday (all those broken needles!) I think it should be at least advanced beginner or intermediate.
I only have one needle in the house so I may jump ahead to another design - not sure yet.  I'm still working on my non-quilting stuff - but I took a break to watch the next video....
I've watched the video four times and I've tried to trace the block on the computer screen - man, I can't see how you get to the section once you are at the end of the first row - it looks like it goes like an L.  This is going to be hard. But I will not give up - I'll see what the design can do!
Posted by June D at 1:03 AM

Back on the Saddle

I set up the machine with my new 1/4" pressure foot and went around the blocks in the pinned Wonky Shoo Fly - it all seems okay now.

I had put on the walking foot and the foot seemed to be pressing down too much - there were a few puckers in the fabric.  I'm going to find the other machine my mom left me and get it tuned up and set up for the walking foot - then I will not have to mess with figuring out the set up on this machine.  But it might be while before I can go thru the boxes in the garage...

Anyway, I have the five block by two block section all with the blocks outlined.  Next step I'll put the quilting foot on and do the stitch in the ditch for the blocks with the Shoo Flies...

So I'm back on the saddle! and will get the other WSF section done too!  Or maybe I'll do more piecing on the Liberated Round Robin...
Posted by June D at 5:29 PM 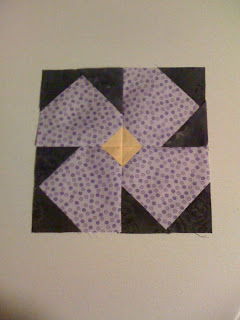 I'll be glad to get back to sewing- wonderful to have the supplies!
Posted by June D at 5:09 PM

When Your Needle is Breaking (While FMQing)

Today I got a call from Leah Day!  It was about something being out of stock that I ordered yesterday - but still it was fun to chat with her a bit.  I told her how I was doing her beginning designs and how the needle was breaking.  She asked me a few questions, then diagnosed it as operator error.  When FMQing, of course I have control of the rate of the machine and the rate the fabric goes under the needle.  When I am holding the fabric back then it's bending and breaking the needle.  I said the last two breaks I was going straight - she said probably the timing was off and I should just take it in to be fixed. That one really bent needle can throw the timing off quickly.

So I loaded up the car and took the machine to the La Mesa Sew and Vac.  The lady there (I think it was Monika) was very nice.  She agreed with the diagnoses and started to write the ticket for repair up.  Then she noticed I had the quilting foot on the machine - she asked if I had tested it with a regular pressure foot and I said no.  I had broken all my needles so had just packed up and brought it to her.  She said the test for timing was to sew a straight line and a zig zag line - so she found a pressure foot and put it on.  (I had put on the dull needle that I was using to scoop the thread thru when bringing up the bobbin and had grabbed a spool of old thread and put it on the top of the machine.)  She threaded the machine and did the test - both sides of the fabric looked perfect. She wound up the cords and told me I needed to practice coordinating the speed - she saved me either $45 or $75 (I can't remember how much a tune up is.  They had a label on the machine so could tell I had last brought it in December 2010.)

Anyway, that's a pretty good test to know about.  Hopefully I'll remember it the next time needles start to break - but also now maybe it's pounded in my head to be more careful about letting the fabric go when I'm Free Motion Quilting.

BTW Leah was so nice on the phone.  Very generous with her time.  She was so surprised that I was doing all her beginning designs...!  To me it was just the natural thing to do once I found her wonderful blog.
Posted by June D at 10:36 PM 2 comments: