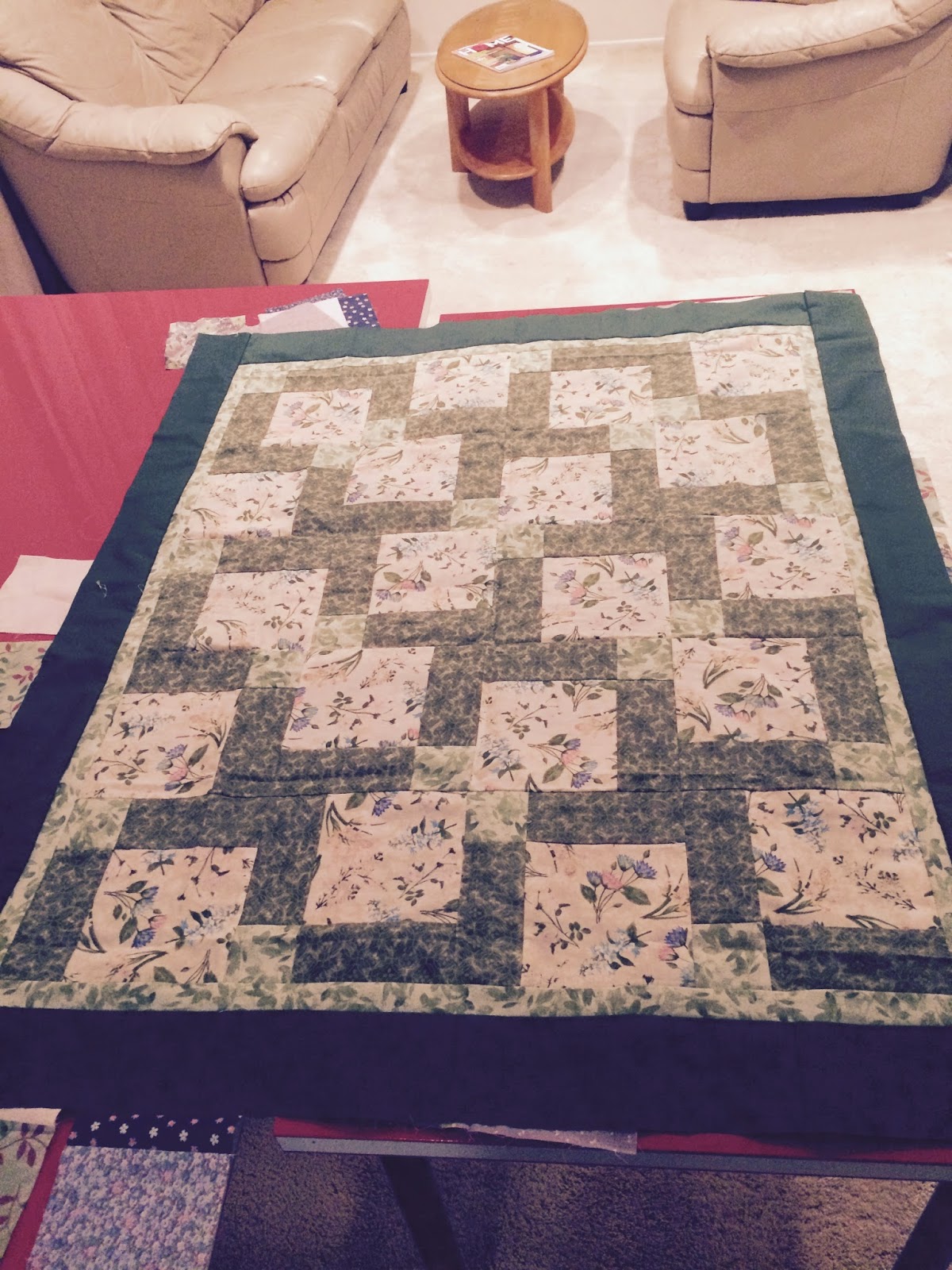 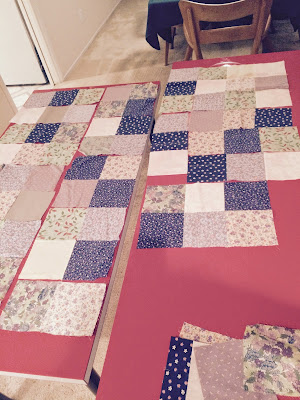 Today was the first day of the new session of the adult education class. A lot of time was used to register. Each student had to stand in three lines! One for attendance, one to register for the class, and then to pay for get the handout. I helped with the last thing. Too bad it takes so much effort and time to do this.

I did manage to iron on several of my circles for the Abacus quilt.  However, I did not have black or grey thread so instead of sewing the circles down worked on what I could with beige thread. I put the final border on the green Quilts for Kids project, and got more of my charm squares sewn (for another QFKs quilts or maybe for a lap quilt for the house).

I have more charm squares in these fabrics ready to sew together.  I plan to combine the squares then to cut apart to add more interest to the end project.  Maybe I'll add longer strips of other fabrics too.  I'm not sure...

Getting Back to Basics and Enjoying the House

Surprising Ways to Pare Down at Home
Posted by June D at 12:01 PM No comments:

Love to Cook? We Want to See Your Kitchen
In the third slide: I'm intrigued with the open shelves and metal workspace. Also see the wood counter cover next to sink? Wonder how much space between the stove and the sink...
Direct link to article about the third slide: http://www.houzz.com/ideabooks/15485932/list/sweet-ideas-and-a-truffle-recipe-from-a-chocolatiers-test-kitchen
Posted by June D at 11:41 AM No comments:

Link to mail box description: http://www.houzz.com/photos/10905991/X-Press-Mail-Box-in-a-Black-Finish-modern-mailboxes
Posted by June D at 1:38 AM No comments:

Room of the Day: Kids and Adults Share a Bright 40-Square-Foot Bathroom
I like:
the open shelves with color on the back
the sink without cabinet (and that she tested to be sure would support weight) would be good for wheelchair!
the towel hooks
that there is also room for some covered shelves
shower only - but there is no photo of the inside of the new shower : (

Would also like:
toilet that is supported and connected only to the wall (easier to clean)

Sure wish the diagram of the room were available!

This link shows the door of the medicine cabinet does not have to match the box behind:
http://www.houzz.com/photos/9933522/Medicine-Cabinets-Mirror-Stainless-Oval-Medicine-Cabinet-26H-13534-transitional-medicine-cabinets
It's stainless steel too!

Inexpensive Medicine Cabinet - appears to have a frame around the mirror
http://www.houzz.com/photos/13603153/Medicine-Cabinet-Economy-15-x-19-1-2-Recessed-contemporary-medicine-cabinets
Can't tell how deep the unit is - I'm looking for something flush to wall. And think I would want to replace mirror with a photo or picture or fabric...
Posted by June D at 1:25 AM No comments: 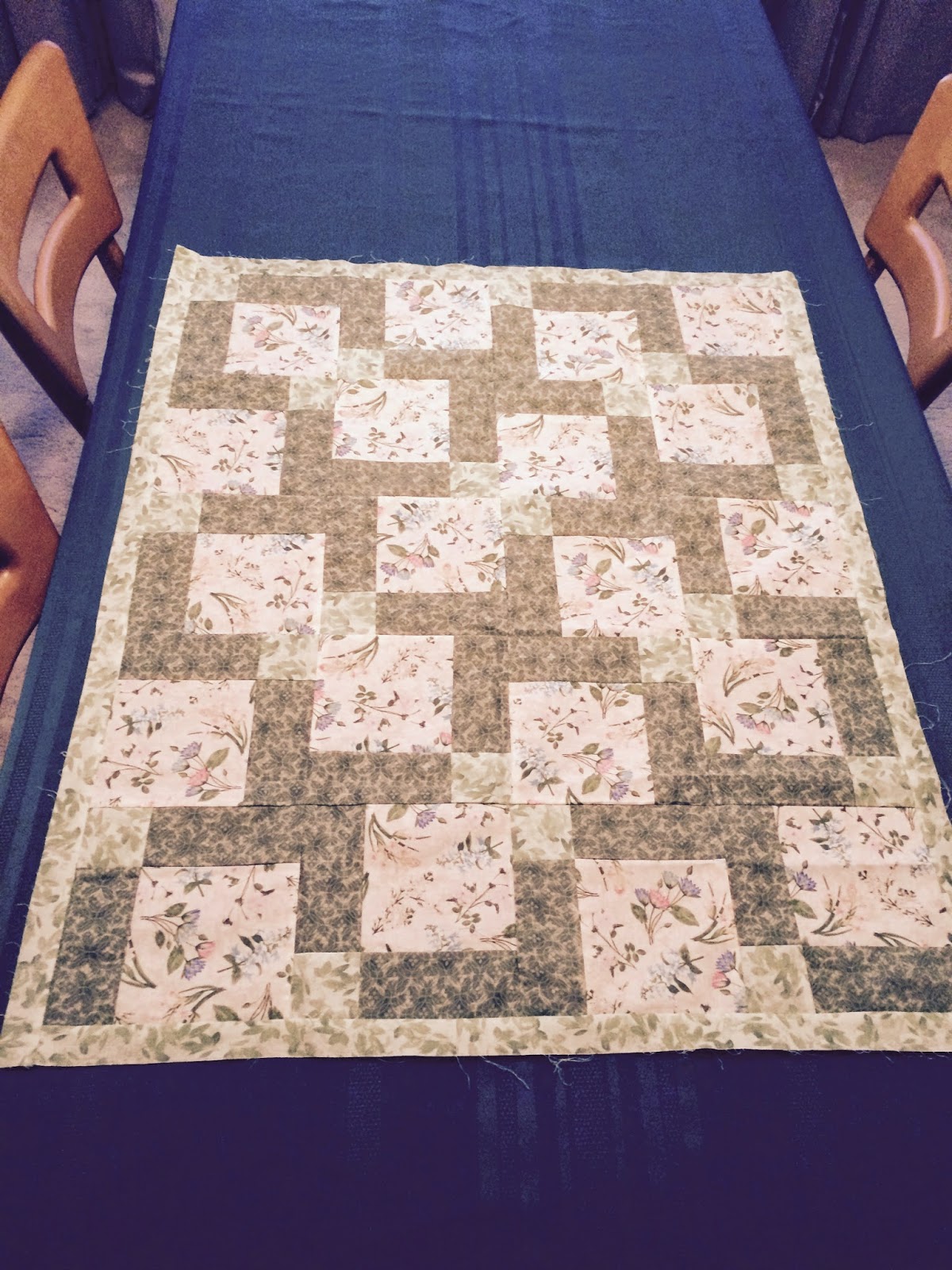 I found a piece of the beige fabric so I pieced in a piece so the selvedge wouldn't show.  Got the rows together and one of the borders.

There was a lot of talking in the class.  Next week is the first session of the new term so we need to be sure to get there on time and have some hand work to do as there will be a lot of people in the class.  Always is for the first few sessions then people drop out as the room is too crowded to any work.  It's a shame they do not just offer more classes, but if I can stick it out then it's a nice place to sew and possibly a place to meet people.  That hasn't really happened yet for me but perhaps if I attend more regularly it will!

The other topic was the Road to California Quilt Show.  I was one of the few not attending the show.  Maybe next year.

My out of town friend is still here so I'm having fun going about with her and having nice meals and outings.  We went to Orange County: breakfast at Knotts, South Coast Plaza and Ikea, Dinner at Tiako.  A nice day.

She is going to clear out more things at her place when she returns.  Was hoping when I heard that that she'd want to sort of report in progress each week or so so we could share and urge each other on, but she is not interested in that so I'm on my own for that.  I've signed up for a seven week yoga class so my plan is to go thru everything and get rid of extras within that time - so at the end I'm ready to go about hiring workers to make the improvements on the house that we/I want.  I can start as soon as my friend leaves...  But I'm so liking that she is here now.
Posted by June D at 9:07 PM No comments:

I attended the adult education class again on Friday and did more on the disappearing nine patch.

Sewed the blocks, cut them into quarters, then sewed them into rows.  The selvedge shows in one of the blocks so I wrote the Quilts for Kids coordinator for direction on what to do (replace with another beige or just let it show).  I have the two borders cut out so this this coming Friday I will finish the top.  Too bad I don't have the batting and backing but we will be meeting in person again the 2nd Sunday of February so I can pick that up from her then.

Next time I bring home fabric I'm going to ask to bring the left overs so I don't have to think about needing extra fabric!

And next time I make a disappearing nine-patch I'm going to do in a different layout so it looks like the quilt is made up of sashed squares!  I didn't have enough fabric to do this this time. 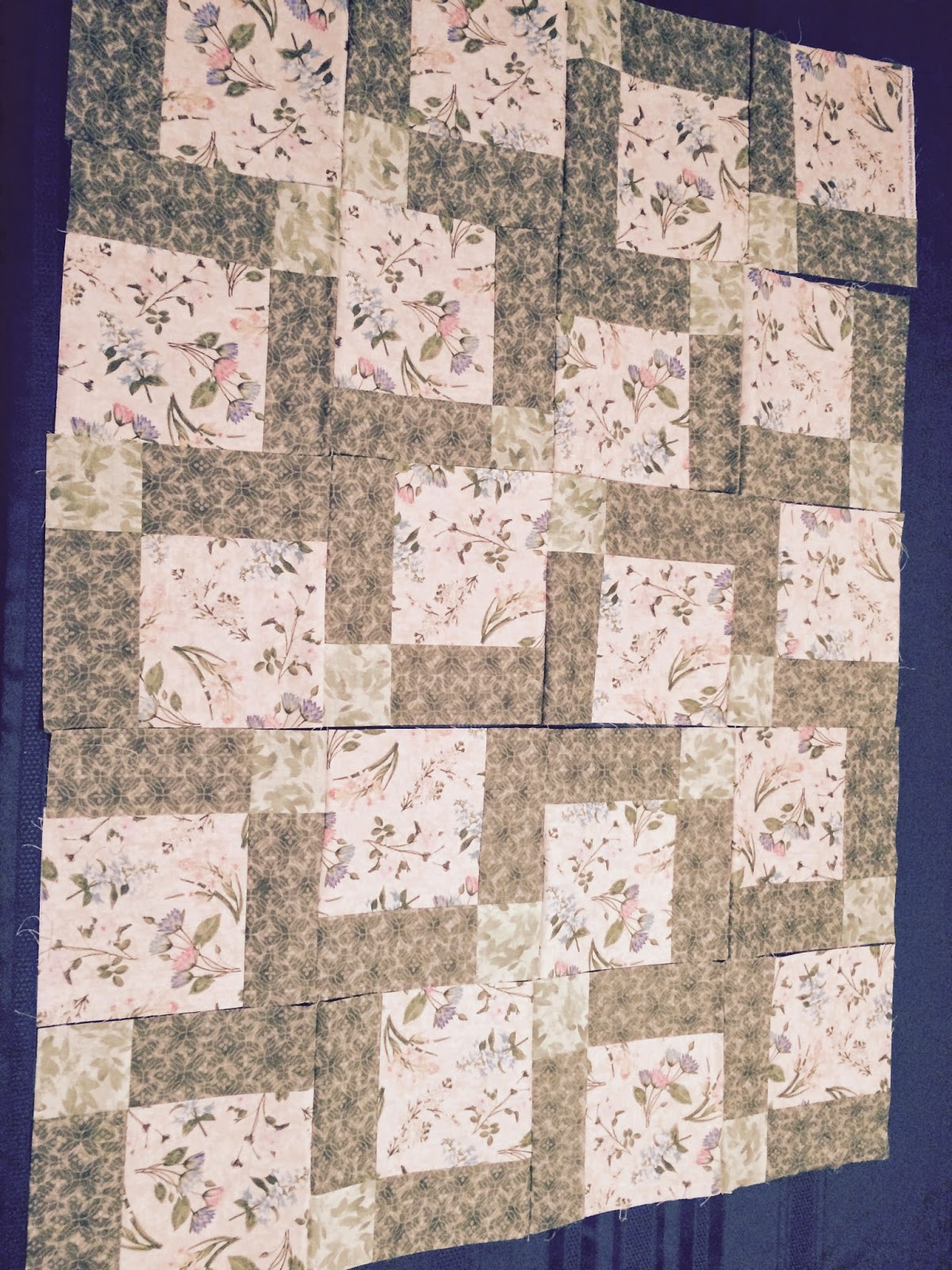 I finally found a photo with the general layout for the kitchen that I have been dreaming about: 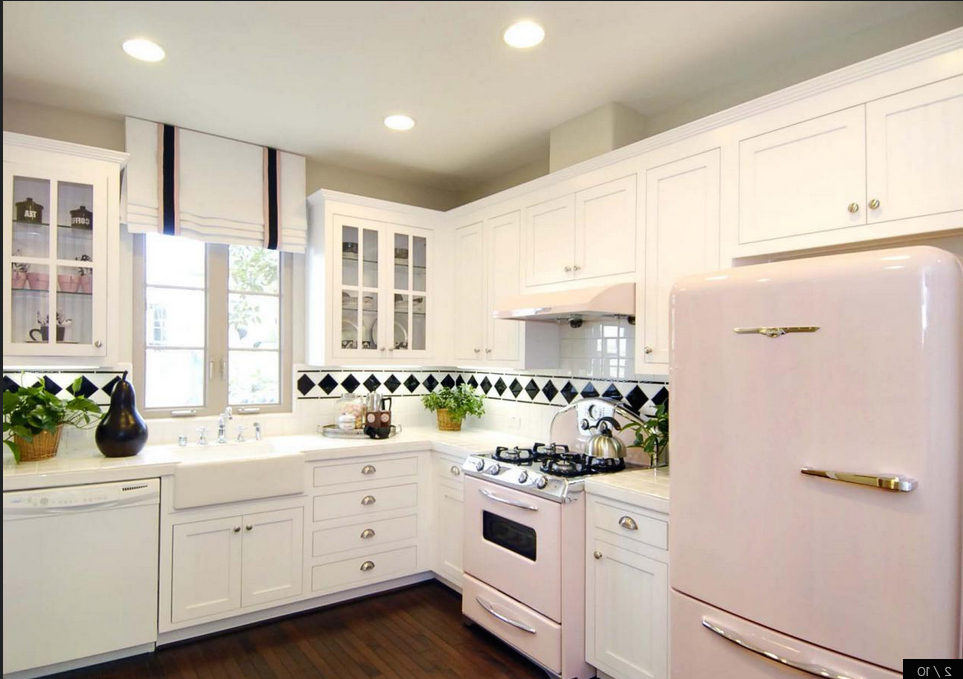 I like the way the wall behind the sink has tile - then the window starting so that would mean the window would need to be changed.

Need to figure a spot for the microwave - a built in spot. and we put the coffee maker and perhaps the ninja and some seasons the toaster on the counter too.  So it's not exactly what I want or can have - but it's so pretty that finally my DH and friend could sort of picture what I was trying to explain so I'm glad to find the photo!  (hope I can find the source photo again!) 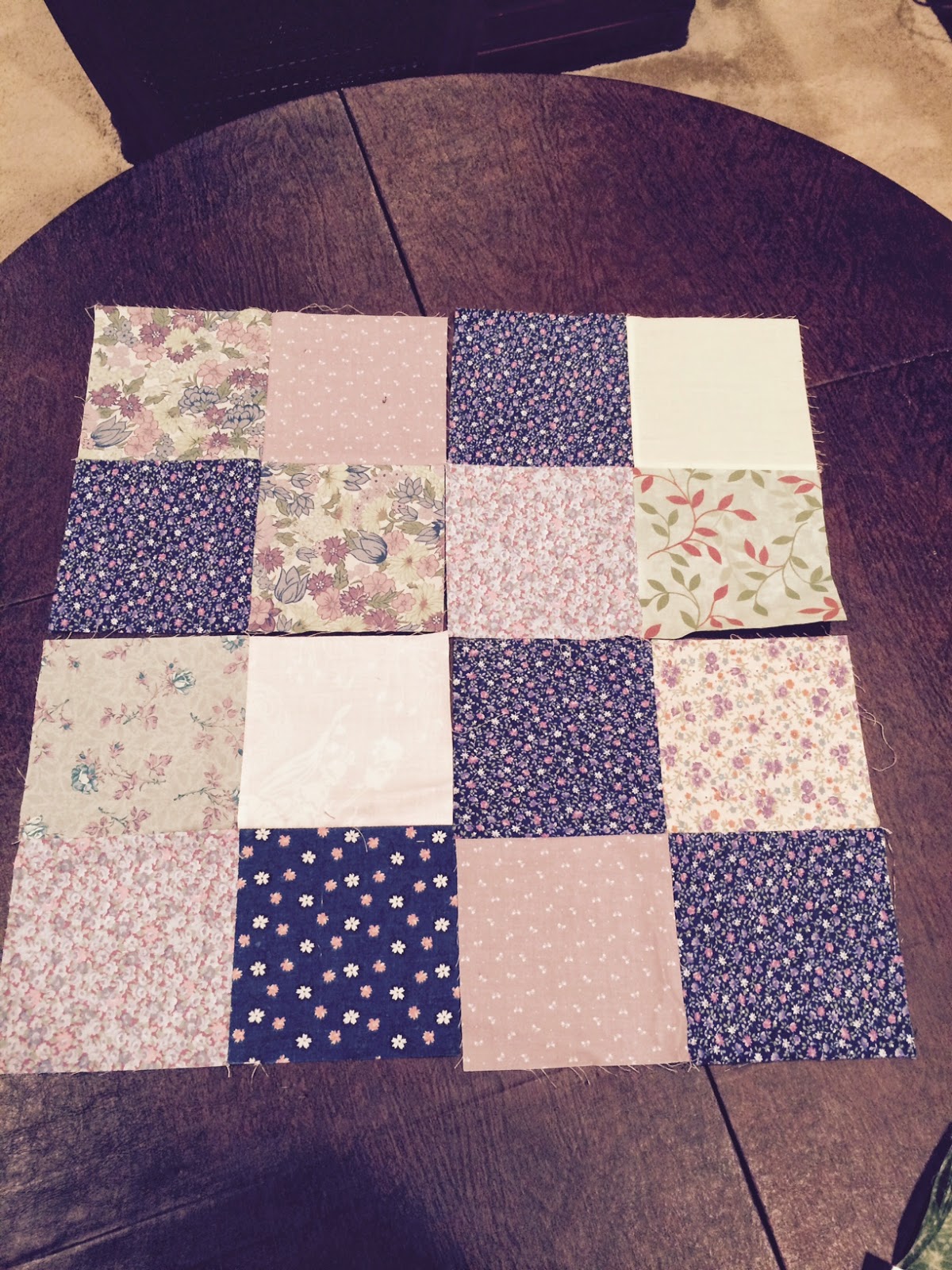 Today I went to the adult education class and brought my machine and fabric for a Quilts for Kids disappearing nine-patch and some charm squares.

So I actually sewed today!

First I put together some random scrappy four patches.  I had to remember where to put the needle to get quarter inch seams. One of the secrets to good quilts is good colors and fabric.  I just grabbed what I had, guess I should have been more particular! 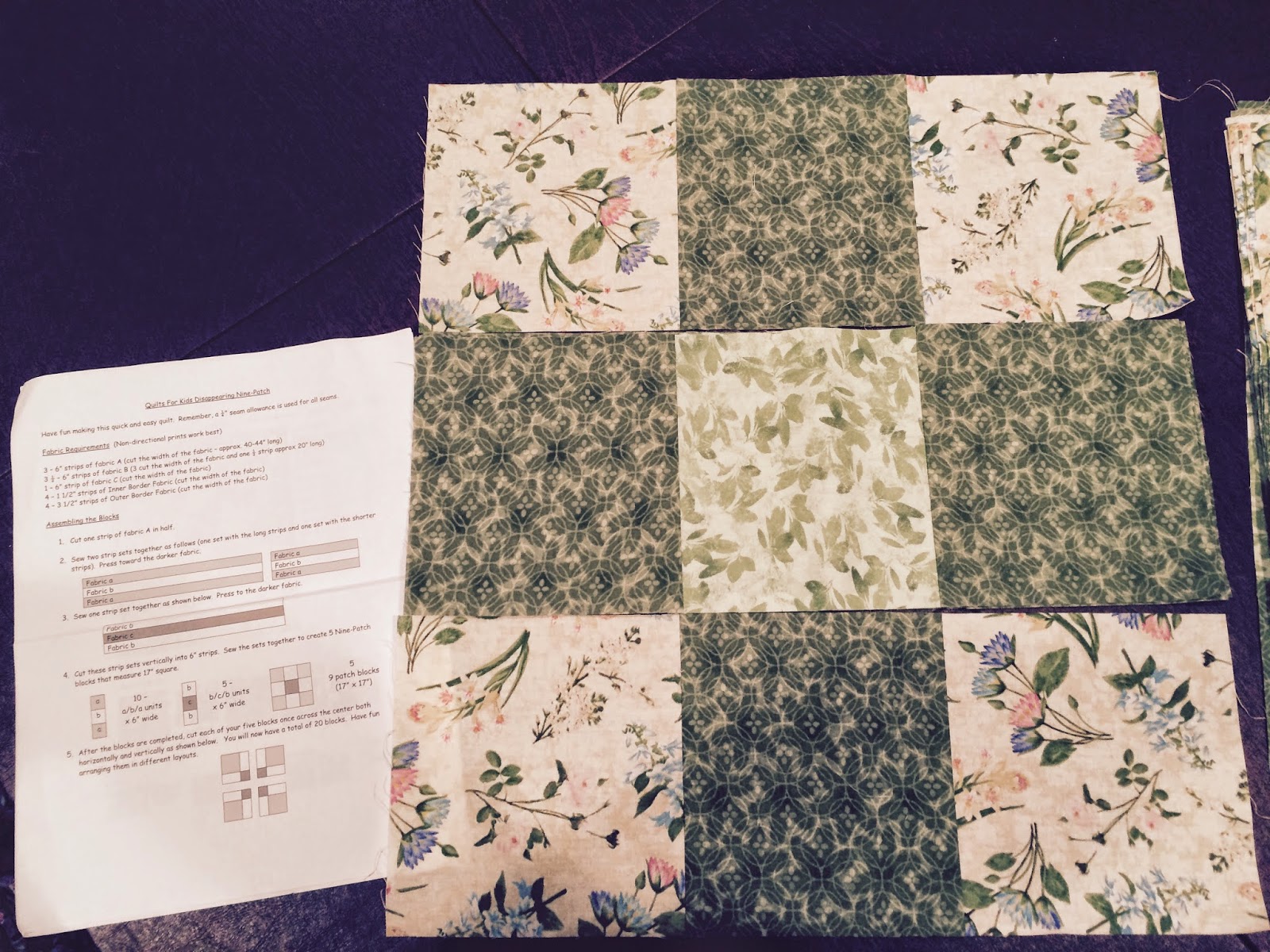 Then I had enough nerve to start on the Quilts for Kids fabric I had cut at their working day a while back.  In real life the center fabric seems very close to the darker fabric, it's nice to see in the photo that there is a good contrast there.

My friend is here from out of town, we are having a nice time doing things together and dreaming...  We went to Home Depot and found this terrific back splash for a dream kitchen. 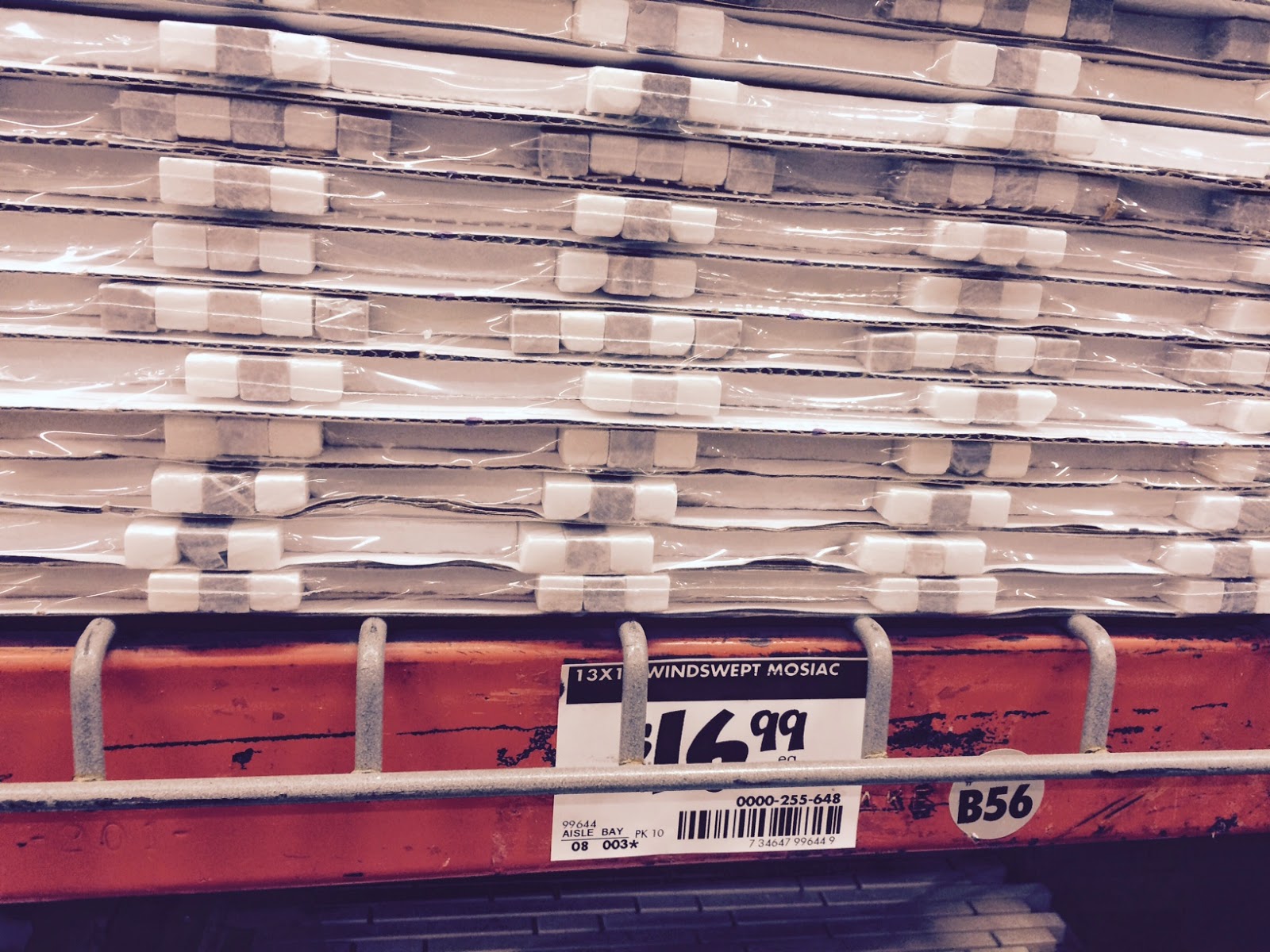 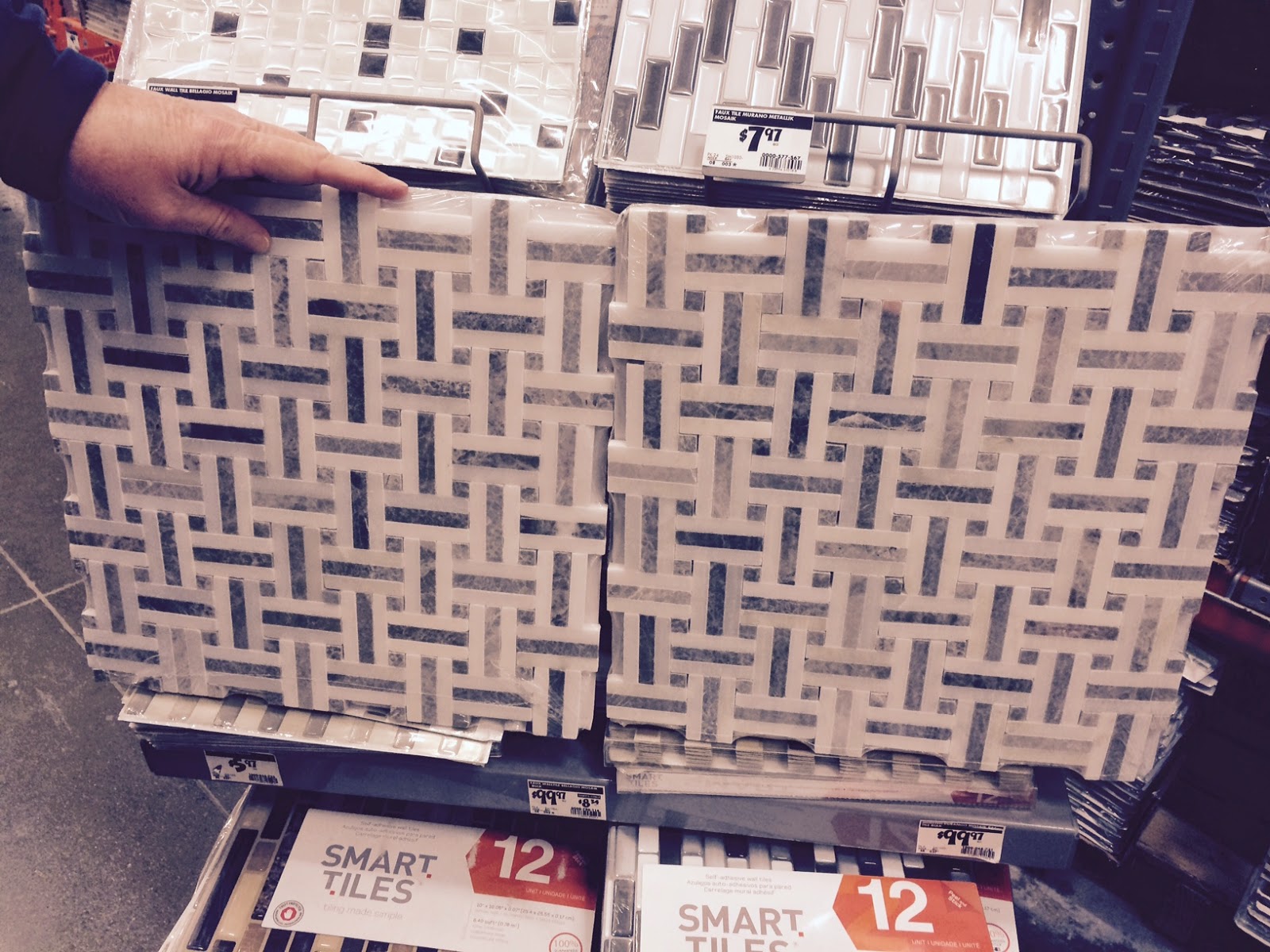