My friend and I put together nine of the Block Lotto blocks I won back in 2010 to make a baby quilt for her new granddaughter in 2015. This year the daughter returned the quilt and requested that it be made larger since the baby was larger now. She didn't want a new quilt, she wanted this one enlarged.

So how was this going to get done?  I sent my friend some fabric and more of the blocks to help her get started.

She decided to start by making another quilt the same size!  She even put binding on the quilt!

So when I came for my visit we had two quilts the same size that needed to be combined.  She did not want to remove the binding.  The idea of sewing strips to the sides to join the pieces was unappealing to her.  So I suggested trying to zig zag them together.  Last Road to California, I had watched a demo by Pauline on how she joined quilt pieces to finish the projects up...  Since our pieces had binding we had to adapt the method.

My friend zig zagged the two quilts before I came for my visit.  It actually looked pretty good.  But we decided to finish it off nicely with strips to cover the zig zagging.

We made strips of fabric.  Wider for the front.  They were folded in half, then the ends were brought up to meet at the center.    So the resulting strips had folded edges, and were all two layers deep.  These were starched and then sewn to cover the joining of the two pieces.  We sewed the back side first.  Then the wider strip was sewn to the front.  Each strip was sewn down on both sides. 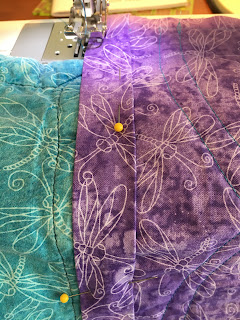 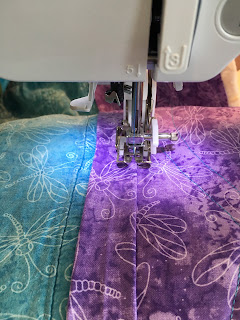 If you do this I suggest sewing the left side first - it would be easier then to pull the fabric flat while sewing.  I seem to only have taken a photo of the first seam when it was done with the initial sewing on the right side - don't do what is shown in the photo above! Look below for a better sequence.

After the two quilts were joined we made borders and added them using the same method. 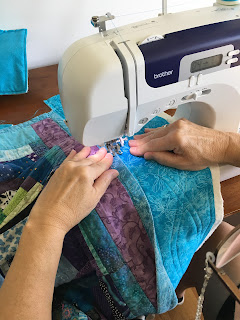 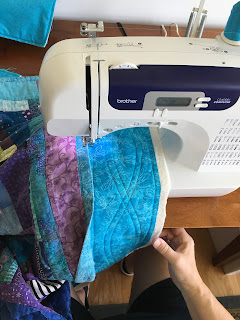 In the photos above, you can see we sewed initially the left side and then the right side - this was the best way to do add the strips, then it was easy to pull the pieces flat.  My friend used a walking foot to make the design on the borders. 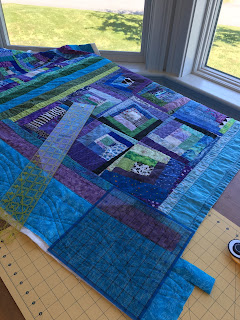 We pinned the pieces together before we sewed, but did not measure until we were trimming things up.  Each time we could see more and more ripples appearing in the project. 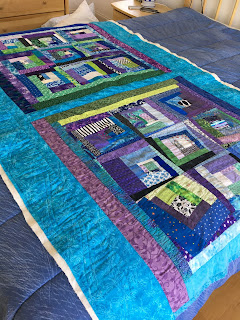 But we liked the way the stitches were showing up and how easy it was to join the larger quilted pieces together.... 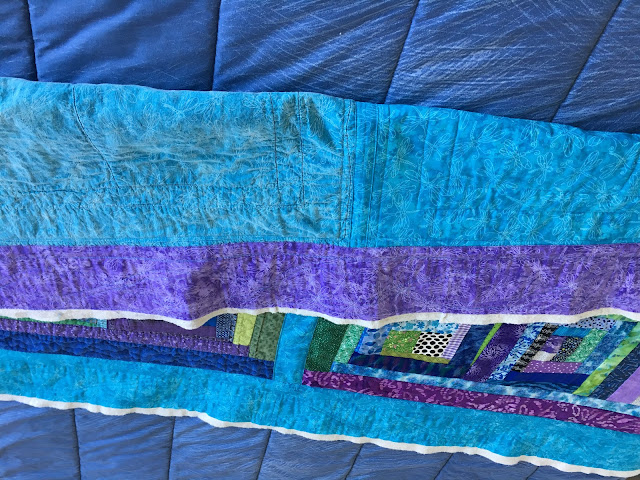 Her little dog liked the larger quilt too! 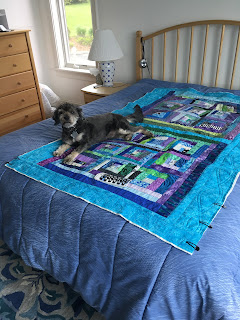 When we added the shorter top and bottom borders we could see that we needed to be sure the pieces were pinned on so things were centered, then the waves did not appear.  So that is a step to be sure to add if you try this method!

We were not consistent with the size of the strips, started out with half inch on back and 2 inches on front. We used Clover bias tape makers at first, then decided we wanted different widths.  It was pretty easy to just press and get things set up without the Clover tools.

We sewed the binding on and took some close ups of the corners...

For the binding we trimmed so the batting extended about 1/8 or maybe it was 1/4 inch from the quilt.  The strips were cut 3 inches.  We adjusted the seam width so it was sewn on around 3/8 inch so the front and back were pretty even. 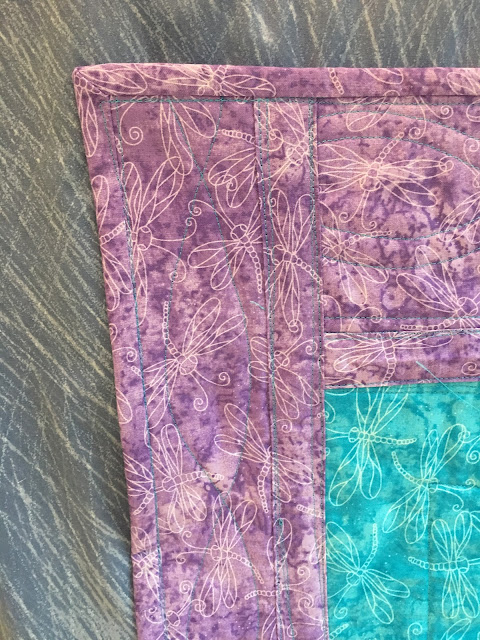 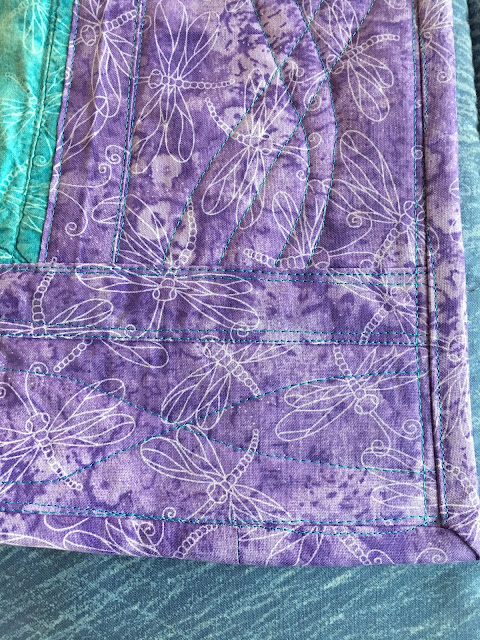 You can see the fold in the one strip, that was the one sewn right side, then left side mentioned above.  In the end that fold washed out, but it bothered me once I noticed it.

Here is how it looked before it was washed... 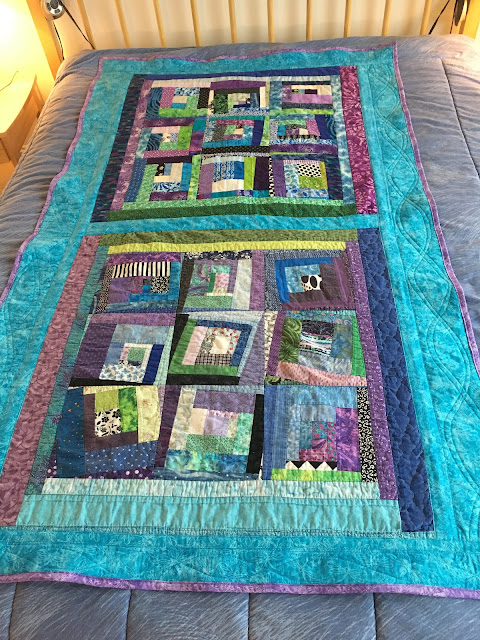 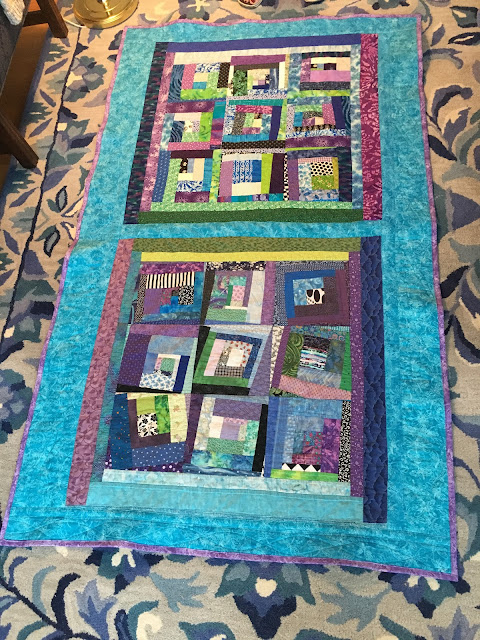 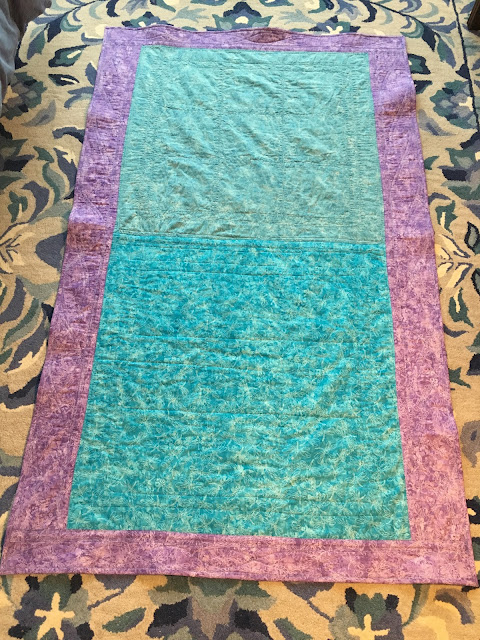 It is easy to the original quilt size on the back of the quilt.  Enlarged now so it covers the top of a twin mattress!

Here I tried to get an artistic shot of the quilt on a chair... 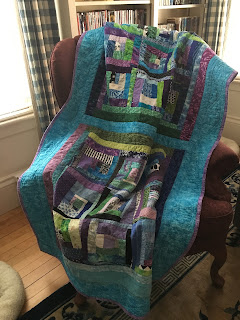 I'm sure her daughter and granddaughter are enjoying the enlarged quilt, and it will be used for many more years now!

This was a fun challenge.  So lucky I got to share in the adventure with my friend.  This method of joining quilted pieces is very easy, the results were very nice. I recommend giving it a try!

Amazingly, I still have more BlockLotto blocks to play with!
Posted by June D at 12:13 PM 1 comment: