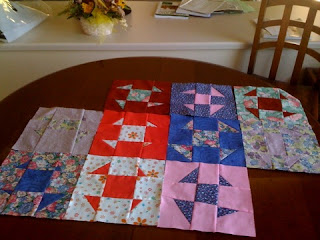 I finished my blocks up during the week before April (my reward for sending in blocks before the deadline was getting to see the directions early).
These were so much fun to sew! Sophie had really clear directions for doing them using three different methods - made it so easy to just pick two pieces of fabric and cut and sew! really it took longer to design on the fabrics and to verify they were washed and color set than it did to stitch them up!
I learned that sometimes the contrast does not show up as expected (see the purple blocks) - in real life these were really pretty fabrics together - just not the best contrast for the challenge.
When the drawing was held for the lottery, I was a winner!

---
To be Added:  The backstory and process of changing these in a quilt!
---

I only kept the dark blue with larger floral blocks (blocks 6 and 8 above counting from the top right) and sent the rest off to others who won them.
These will be so fun to quilt - lots of space for stitching to show in the 'plain' blocks!
Posted by June D at 9:44 PM