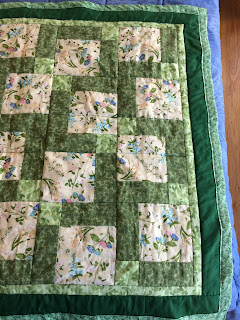 I finally finished the green Quilts For Kids (started Jan 2015) project last summer.  I brought it with me to the east coast and used it to help my friend make a quilt for her granddaughter.

We only had the regular walking foot for the machine so were only able to do straight stitching.  I was disappointed to not be able to introduce her to FMQing, but it was very freeing also to just do the stitch in the ditch and to get the projects done!

First went around each block.  Goofed in one place near the middle so just added another line so the quilting was symmetrical.  Then went around the borders.

When it was time to do the borders realized:
1.  I didn't have enough pins with me to pin the bindings the way I have done in the past, and also didn't have any glue or snapping pins to keep the border in place.
2.  There was extra batting and fabric all around the quilt.


Then we just folded and sewed, pinning on side down at a time.  I did the top then the sides - but now I'm not sure that is the correct order.

The binding then added two inches to the size of the quilt and looked like another border instead of binding.

The wider binding made it very simple to finish this quilt and I think I will just do it for all my charity quilts. Then it will mean I can finish them so they can be donated and used!

As a lesson I showed her how to do a step with my green quilt, and she then did the sewing on her baby quilt.

We'd prefer more quilting, but sometimes it's better to just get something done...


Created with the HTML Table Generator
Posted by June D at 12:52 PM