Odds and Ends from the Week

This was a strange week.  Can't put my finger on it...

Anyway, so no sewing again. 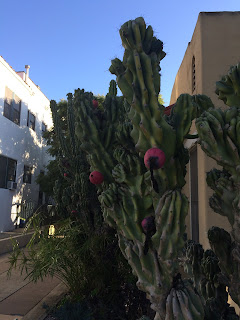 Walked in neighborhood by San Diego Zoo and saw this different looking cactus with very smooth round pears.
Did have a gathering of mainly my husband's students for a game night and dinner on Wednesday night.  We've been doing each fall for several years.  Always make Shepherd's Pie and Salad.  This year only made vegetarian version and it was gobbled up.  I also made a Magic Pumpkin Cake, that was a hit.  I used regular whipped cream instead of cool whip but followed the rest of the recipe.  It's a lot of calories, but was well received and I'd make again in a flash!

Friday I had friends over for the extra casserole that I had made, and brought over some for our neighbor and left some with our son when I had lunch with him.

Saturday we met with a friend's son for Indian dinner.

So it wasn't a lonely week - but it was strange. 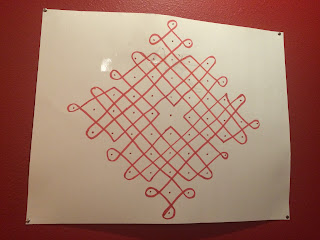 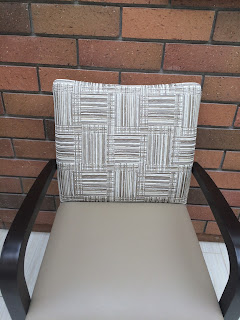 Went to dermatologist last week for exam. Misplaced my parking ticket so thought I'd have to pay the maximum fee for the day instead of the one hour rate.  Decided since I had time to go to the hospital to have lunch and to walk my 10K steps before leaving.

Saw this chair with interesting back in one of the lobbies I passed thru several times. 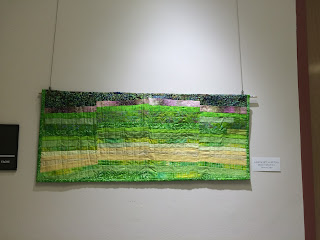 There was a wall of different mainly paintings by patients or employees, I'm not sure who they were by.  Each had a contact card so think they were for sale.

This was the only fabric piece I saw.  Each time I passed it looked more interesting.

(I had considered attending a few quilt guild meetings this week, just to taste them.  But decided to not do that this month after all.) 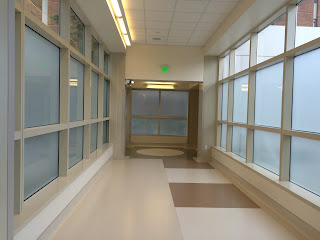 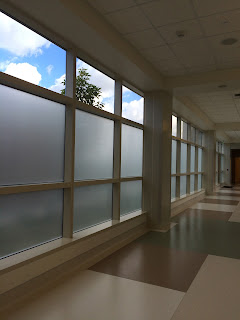 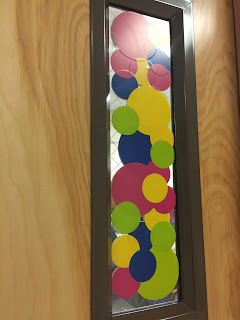 Some of the hospital office doors had little windows.  This one was semi-blocked with stickers either for decoration or for semi-privacy.

My husband has a similar office window. But his is floor to ceiling next to a solid door.  He wants to block the view completely.  I guess the students are staring in on him as he works and it bothers him to be peeked at.  He is getting a chair to sit in with his laptop.  Perhaps he doesn't want them to see him if he happens to nod off while working in that comfortable chair!!

In the end I only had to pay a dollar more than the regular fee for medical office parking, but I was glad to have my steps in especially since my usual Tuesday and Thursday walk partner wasn't available this week.

I was walking Friday while the tragedy in Paris was happening.  So very, very sad. There is a lot of sadness around the world, difficult to understand people needing to be so horrible to others.