I finished up my extra block for the Marvelous Mosaic Quilt.  My husband had stopped by the SDSU campus Blick's store yesterday and got me the 1/4 and 1/2 inch tape I had requested, but in rewatching Leah's video I heard that I could be using the walking foot itself as a guide for those lines.  So for this practice block I did that.  I also used the guide bar for the one place where the lines are 1 1/2 inches apart, and I eyeballed the second line from the center.  It all looks good to me... Not perfect, not just good enough, but good.  I'm pleased. 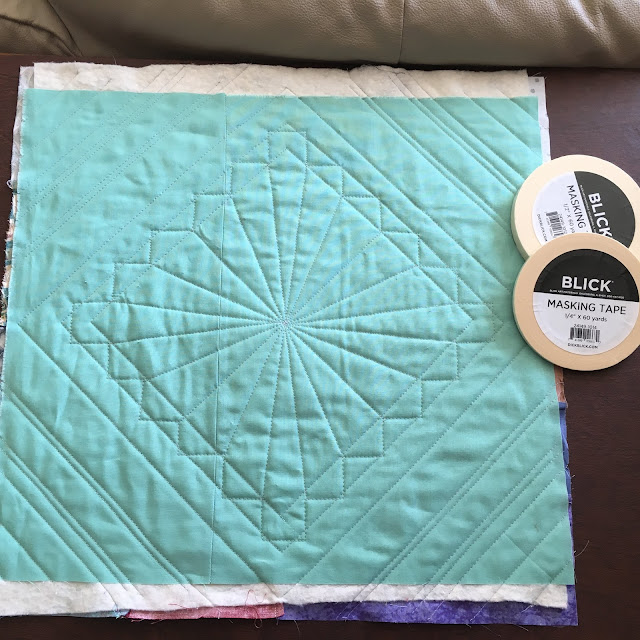 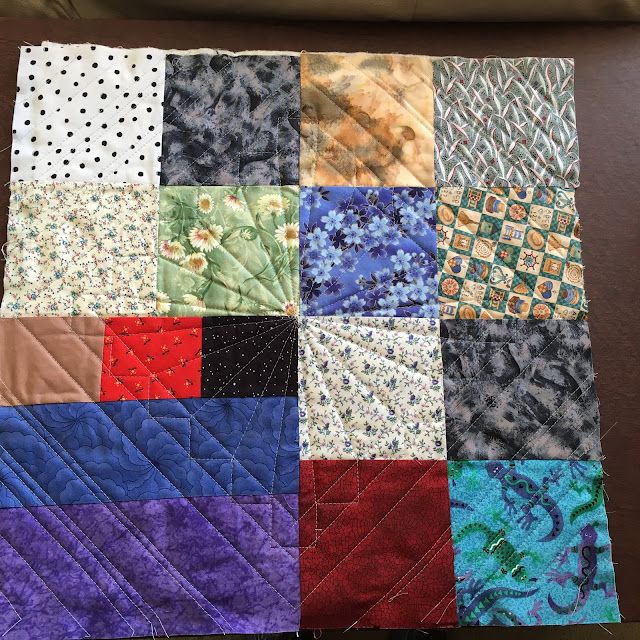 My original plan was to make this block a miniature of the quilt, but my design was off center so I stuck with adding the lines to the corners of the fabric.

Goodwill came and picked up the secretary my Mom had given me.

After he returned from helping to move it to the front entryway, my son asked how I felt about giving it away, such a nice boy.  I think he would have moved it right back if I had expressed any second thoughts!

I told him I was just making myself remember how I enjoyed it when I was a kid.  So much fun to put things in the cubby holes and to close up the front to hide the desk too.  I would have had to drill a hole in the back to use it as a desk now (as that is how I would get the electricity to the computer.)  It was really made for another time, another life.

I had let him set up a desk in it too when he was little, too little it turned out.  He accidentally nicked the front with a stapler when he was getting down from the chair and I was afraid it or he would get too banged up,  so that was just a short experiment.  : ( He has no real memories of using the desk.

But I feel okay about letting the secretary go.  I remember that my mom said she was going to offer it for a garage sale and how I said 'oh no you can't do that'.  So she sighed and didn't put it up for sale then.  As soon as I had a place of my own she moved the furniture so I would have it.  In my condo, I had it in the living room so it was the first thing people would see when entering the front door.  I used the top as a book shelf for my paper back books.  I remember thinking if I sold all of the books for 25 cents each I would have enough to get a Paul Revere bowl.  So I sort of did that.

Recently I placed that Paul Revere bowl on our current display/book shelf. It was all tarnished, but I hired a lady to help me with cleaning and she surprised me and shined it all up! 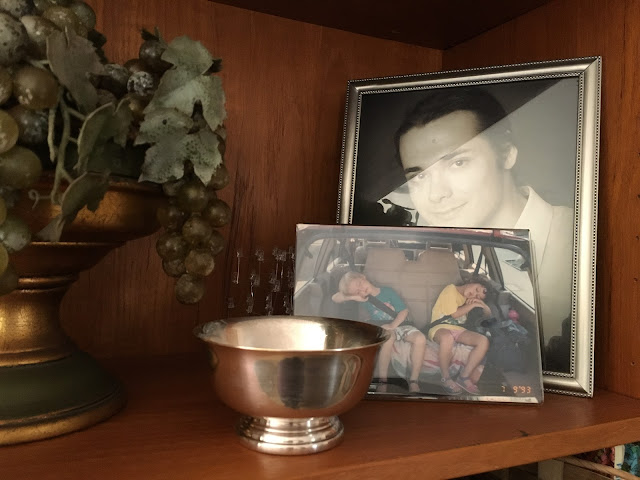 Those plastic grapes are part of the deal when my Mom purchased their living room and dining room set from Biggar J H Furniture in Pasadena (now closed I just checked).  I remember her telling people when they come over and were admiring the new furniture how she bought everything in the display at the store, including the knick-knacks and pictures for the wall!  We still use some of those furniture pieces in our den and living room.

The larger picture is our son taken a year or two after he graduated from high school. He looks like a movie star I think.

The smaller one is when he was five years old wearing the dinosaur shorts I made him with a friend at the end of fun trip somewhere - July 7, 1993.  So sweet.  I heard that little girl got married well after her wedding.  We weren't on the list to attend the wedding which I can understand, but it my feelings were hurt that her mom didn't even email me an announcement after the event.  Oh well.

Okay, so here is the secretary. 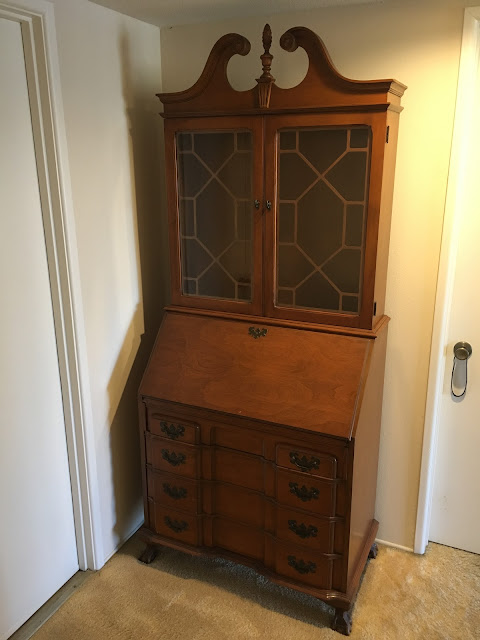 It was always hard to figure out where to put it.  It had been in our living room, dining room, den, and ended up in the hallway when my husband moved it to get it out of the way when we were rearranging things after having the house painted.

The glass doors got stuck shut with that move, so the top has been empty for a while.  Before that I had special photos of our son and art work and pieces he made on display. I had used a Marti Gras necklace (that I got on the trip with my husband when he was going to propose to me but chickened out) to keep the doors closed but not shut as I knew it was extra hard to open those doors.

When I was a kid, I remember coming home from school and being so surprised that my mom had moved it to different places and rooms in our house then too.  I guess she had a hard time finding the perfect place for it too.  It was something she purchased.  She told me the door windows had 13 sections, one for each of the original colonies.

I still can't figure out how she moved it by herself.  And I can't figure out how my husband was able to move it up and down the stairs by himself either.  I was taking care last night that our little dog wasn't underfoot when he and my DS did the final move of the secretary so I don't really know how that was done either!

This morning when it was waiting in the front entry for Goodwill to pick up, I took some final photos. 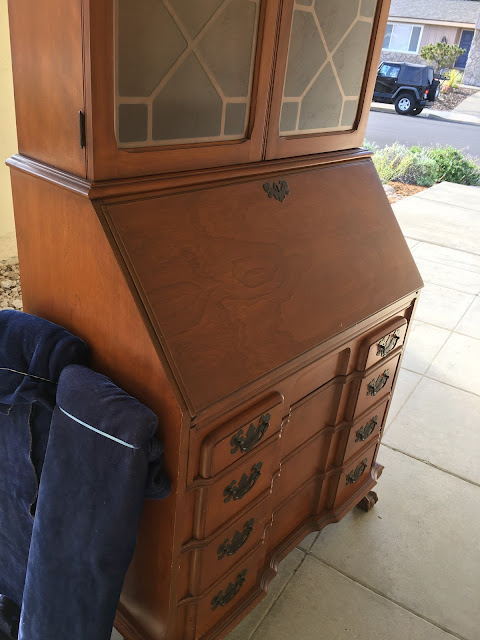 Most recently, I kept wrapping paper, ribbons, and tape in some of the drawers.  Office supplies or large art projects mainly in the others. 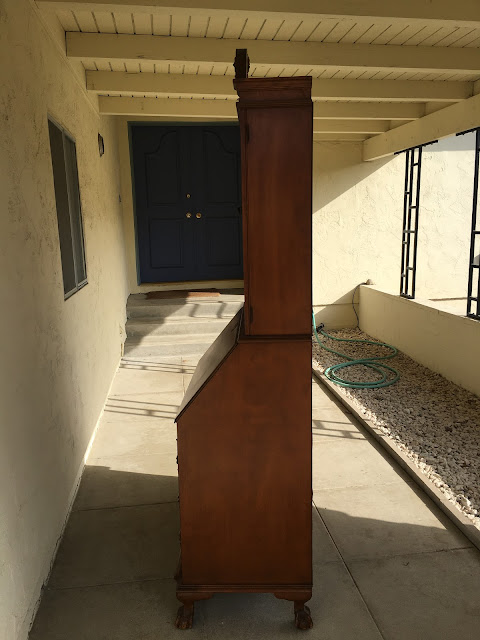 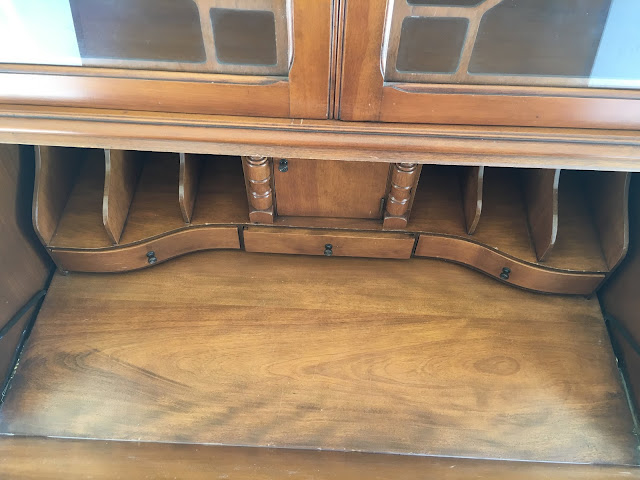 I realized I didn't have a photo of the desk part of the piece. Since it was placed so close to the wall while it was waiting for Goodwill I couldn't open it up completely.  But here is the inside.

For years in the the two vertical pull out places I kept some three days passes to Disneyland (that still had one day left that I thought we would use someday - but didn't).  And it was where I put the medals my father won at the 1928 and 1929 Junior Olympics, our passports, those yellow immunization cards, and our car pink slips.  I had a little stash of greeting cards in one of the slots so it was easy to pull one out when it was needed.  When I was younger I had sealing wax and seals in the drawers, and for a while I had ink and fillable pens behind the little door.  My Mom, or maybe it was my Godmother, gave me a special desk pad that protected the bottom of the desk. 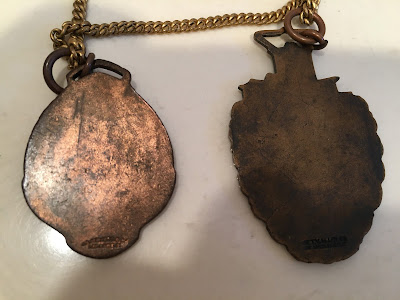 Two Christmases ago, when our son expressed an interest in learning how to play a violin,  I gave him my Dad's violin.  DS was going to get a practice instrument, but I thought he might as well use the one my father and I had both used!  There was a local place that fixed it up for him.  They put new strings on it, perhaps a new bridge, polished it up and I got him a new bow.  Neither my Dad nor I had played it at all for many years. I don't even know if our son remembered I had the violin when he mentioned wanting to play one.

My Dad played little snippets of songs off and on through out my childhood.

I remember my Dad got the case redone for me when I took lessons in junior high (or maybe it was a entirely new case).  I tried, but was never very good at the violin. Always in one of the last three chairs in the orchestra.  I made a good friend of the girl who was always first or second chair (at the front), so it was fun to have that experience. Her last name was Bonaparte.  (I was so surprised later when I learned that was also a famous last name.) 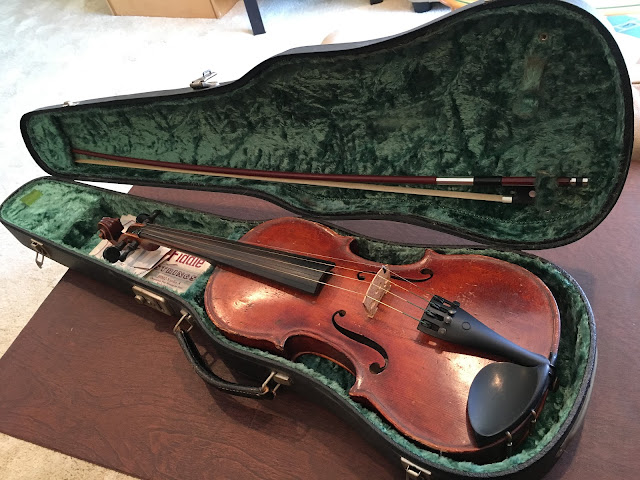 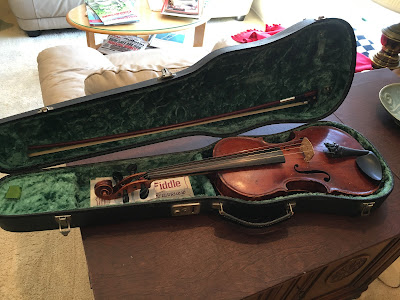 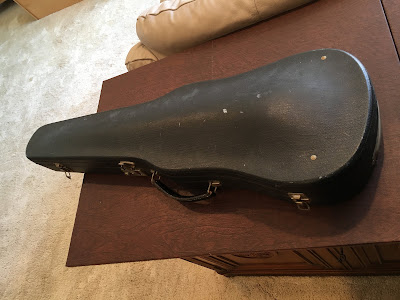 Her family would have me over for dinner sometimes.  They always knew what they were having for dinner as their mom had a schedule for the meals.  Something like: Friday- tacos, Saturday - spaghetti, Sunday - ham or roast beef, Monday - meatloaf, Tuesday - hamburgers, Wednesday - mac and cheese, Thursday - chili.  It was a great idea I thought. I really liked the tacos.

My mom didn't do that.  As I recall, we mainly had different salads or went out as my dad was away doing construction work.  My favorite meal for a long time was hamburger patties with peas and Kraft mac and cheese.  My mom made great french dip sandwiches too. She made a lot of good food actually.  But that isn't the focus of this memory.

When I got married I proposed having meals on a schedule to my husband, but he didn't think it was a good idea.  Until our son was in high school we mainly ate out so it ended up not being an issue.  It would be good if I could come up with a new schedule of meals and as long as I didn't announce it or better yet had more than 9 dishes to rotate it would be great with him.  He'd just be glad I think to have me make meals.  Let's see.  My schedule would be something like: Lemon Chicken, Curry Chicken, Stuffed Salmon, (Fall/Winter) Costco Meatloaf/Potatoes, Pollo Asado, Scrambled Eggs, Grilled Chicken.  It's difficult to come up with 9 dishes to rotate!  Think I will work on this idea though.  Better late than never.  I wonder what you have for dinner!! 😀

When our son started at Waldorf they had an unwritten schedule for the kids to wear different colors every day.  It wasn't in rainbow order.  I can't remember now, but at the time it made it very nice when it came to dressing him for school.  I liked the idea of having limited clothes to deal with.  He always looked nice.  Made it easy.  I wanted to do that for myself too when he was at Waldorf, but I didn't have as many colors.

For many things, it's better to have fewer choices, fewer decisions.  Then there would be more time for important things!

Well, I'd better get back to today and get dinner planned and bookkeeping started! 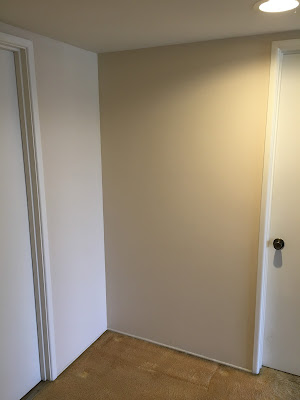