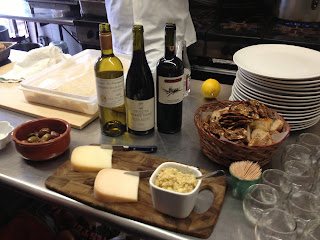 Today we went to Davis Square to see an open house - but when we got there it was all closed up.  The house looked okay, but was in a bad location - was built next to an old tannery that was now apartments, and there was a car repair place a few doors down.  About three houses away there was a square brick building with the word DEMO painted on it - and the house next to it also had DEMO - so perhaps a huge apartment building is in the future.  Too bad for that block.  It was near some nice places - one of which was Dave's Fresh Pasta where we had our cooking class. 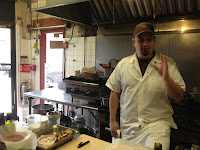 Today's class was different than the previous one - this time Jason did all the cooking.  We got good places to stand and were near the wine and cheese and bread he put out for us to nibble on while he cooked and talked.  He made basic marinara sauce, garlic and oil sauce, Alfredo sauce, wild mushroom cream sauce and vodka tomato cream sauce.  There were 12 people in the kitchen, including DH, friend Jo and his wife Ba so it made more fun I think as we might make the sauces together later on!

After the class Jason opens the store and we can buy things at 10% off - I got a can of tomatoes and cookies.  DH got chocolate bars, wine, and cheese that I noticed.  It was nice to get a deal on the food.

Jo needed to head back home so we said our goodbyes and headed for the T and home.  We stopped at Broadway Market to get some yogurt.  Then relaxed.  I finished reading the Sunday Boston Globe and then we watched a few episodes of Duchess of Duke Street.

Then I realized I would not be able to sleep in bed unless I was able to get some Tums.  So we walked to Inman Square and saw Walgreens was closed but the little convenience store at the corner had lights on so we continued on.  His door was locked but he recognized us and opened the door so I was able to get the Tums.  What a nice guy.  I told DH we really needed to move here - that never would have happened in San Diego.

We decided that actually none of the sauces in the class blew us away but it was good to see how things were done - and we will work on sauces later on.

So it was a nice day.