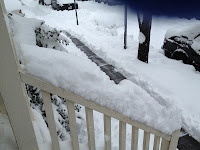 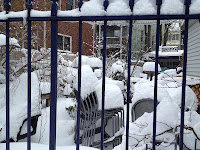 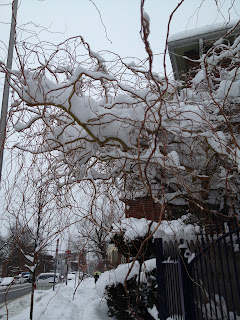 Today it was snowing!  The snow was falling and sticking to the snow that had already come down during the night.  Such a pretty sight!  The postman said it was around 14 inches.

I had oatmeal (coconut, almond, dried apricots) then got dressed to go to the hardware store where I had a new blind cut for the front room.  It was awkward to walk in the snow so returned home - DH tried to put the blind in but first said it was cut too long, then realized I think that he had buggered up the connector when he was trying to put the blind in before.  So I'm not sure what has to be done.

While I was there he got an email from his friend talking about how to meet at the theatre tonight - and event DH had not written down so we were actually double booked.  I wrote to try to give our tickets to game night away to the couple I met at the Cory Doctorow talk but they are in Maryland so the tickets were unused.  Instead... 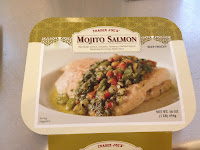 First I made lunch with TJ salmon - I didn't have rice but did have carrots and broccoli that I put the fish on top of.  Very nice. 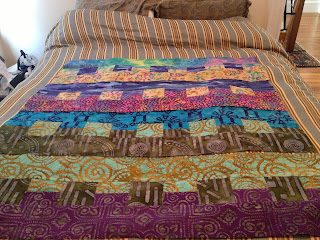 Then I sewed two more sections of the Bernie quilt.  The four fabrics that I have left do not have a lot of contrast, so we'll see how that adds or takes away from the project.... 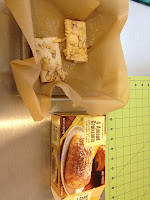 And I put out a box of the Trader Joe almond treats for tomorrow morning... 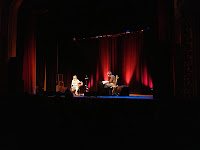 Then finally it was time to walk to the T to get to Davis Square.  We are getting used to walking so it wasn't a problem at all - left from Harvard Square and were just a little late in arriving to the theatre.  J and B were chatting with other friends in the lobby when we arrived.  The show was called The Sharon Shannon Band, but was just two people and to be honest the accompanist, Alan Connor, really was a star too - magical fingers on the keyboard and guitar sometime he would go from one to the other in the same measure!  Afterwards we went to another place for appetizers and chatting time - fun.

It was more difficult to walk home as the snow that had melted was starting to freeze again so it was a little icy - we managed though.  Got home and went to bed!