Can't remember why we talked about making lemon meringue pie.  Perhaps it was because our nice, new neighbor sent an email that I could/should come to her side yard and pick from her trees...

I've never made meringue before so read several recipes before deciding which version to try.  At least two made mention of making a short bread crust for the pie.  That sounded like it would be too much for me...  Then I found Martha Stewart's recipe for what she calls Upside-Down Lemon Meringue Pie (AKA lemon angel pie).  No crust to make. Sounded perfect.

So yesterday we started our pie making adventure. 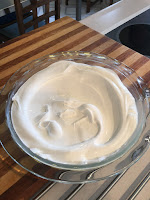 The crust was easy to put together.  Her recipe says to bake for 40 minutes or until it was crisp and light golden on the outside.  It took our oven 60 minutes to get to this stage.  Then you are supposed to keep in the unopened oven for another hour.  (Throwing off my plans for dinner so we ordered pizza to be delivered.) 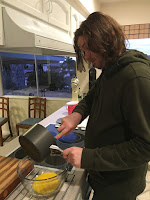 While the crust is baking there is plenty of time to make the lemon curd.  After that becomes thick you put it in a bowl, cover it with plastic wrap so a skin won't form and cool that down.


Then you make whipped cream and fold that into the lemon curd - that mixture is then put into the crust. 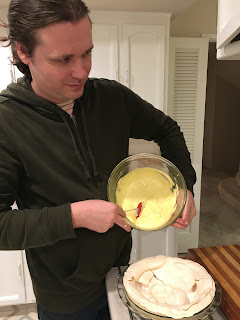 Then I noticed the notes in the recipe to 'Refrigerate, loosely covered, at least 8 hours and up to a day.' Had misread before - thought it had said up to 8 hours not at least...

Knew it would take a long time, but had estimated we'd be eating at 11pm.

So sadly, the pie went in the frig. We played some gin rummy and Set and then went to bed, making appointments with each other to have pie and coffee at 8:30 the next morning... 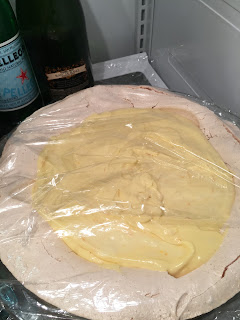 I was first up so I made the final whipped cream to top the pie and got out the fancy tea plates...

The only thing is I misremembered the amount of sugar to put in the whipping cream. I put 1 cup but the recipe calls for 1 tablespoon...

It was a very sweet pie. 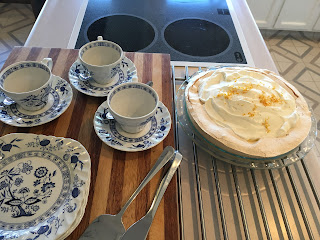 But very pretty and the crust was fun to have.  The extra sugar was very apparent, but it was still tasty.  (Although we were thinking it needed rice or something to absorb the sweetness.) 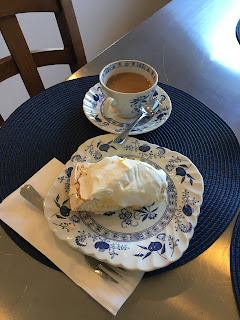 We think it would be good to try with chocolate pudding and bananas too.

Anyway, it was fun to make with my son and enjoy with both he and my husband.  They were pleased I think to get the heart mug rugs - and my son was sweet to make note of how wonderful the 'outside finishing seams' were.  (I had told him about my attempts at binding - he was listening!)

So this extended our Valentine's Day.  No flowers or chocolates or singing like Tu-Na Quilts.  But heart mug rugs, gin rummy and first time ever meringue lemon pie!   : )

------------
My mom used to make individual lemon meringue and grasshopper pies for baby and wedding showers.  I remember how pretty they were, but can it be she made in cupcake pans?  We certainly had enough of those as a regular basis we would make hundreds of cupcakes for Pacific State Hospital when my brother was there.  She got on a kick of making meringue cookies, little scoops of the stuff was put on cookie sheets and left in the oven to bake even after the oven was turned off.  She experimented and put in chocolate chips one time, and mashed strawberries another.  Yummy.  She would ask me to buy her meringue cookies when she was in assisted living.  I'm sorry it never occurred to me to try to make them for her.

I mentioned the other day how we made crepes for the beginning of Mardi Gras. Found out it's called Fat Tuesday in France!  On Wednesday we noticed people with the mark of ash on their foreheads and I was reminded of the delicious Shrove Tuesday buns that I had when I was in Sweden.  We looked up the recipe so this is now on the list to make too.  It's a special bun, stuffed with ground almonds, topped with whipped cream sometimes served in a bowl of hot milk.  I only had it the one time, but it was delicious.  Again something that never occurred to me to make...  But we will now.  In the days when I was in Sweden one only had it once a year, but I was reading that now people are having every Tuesday until Easter.

About Mardi Gras celebrations around the world
https://www.timeanddate.com/holidays/common/carnival-tuesday

"The Semla - More Than Just a Bun

Rooted in tradition
The semla – a small, wheat flour bun, flavoured with cardamom and filled with almond paste and whipped cream – has become something of a carb-packed icon in Sweden. The traditions of semla are rooted in fettisdag(Shrove Tuesday, or Fat Tuesday) when the buns were eaten at a last celebratory feast before the Christian fasting period of Lent. At first, a semla was simply a bun, eaten soaked in hot milk (known as hetvägg).

The changing face of semla
At some point Swedes grew tired of the strict observance of Lent, added cream and almond paste to the mix and started eating semla every Tuesday between Shrove Tuesday and Easter.
Today, no such reservations exist and semlor (the plural of semla) usually appear in bakery windows as near after Christmas as is deemed decent – and sometimes even before. This is followed by a collective, nationwide moan about how it gets earlier every year. Shortly thereafter people begin to eat the things like the world will end tomorrow.

But, increasingly, not just any semla will do. Every year, at around the same time that the bakeries fill with semlor, the Swedish newspapers start to fill with semla taste tests. Panels of ‘experts’ dissect and inspect tables full of semlor to find the best in town."

https://www.recepten.se/recept/semlor.html - a wealth of Swedish recipes!  I hadn't thought about this food in so long.  The translations are fun, but with all the photos I think will be easy to follow and make. I didn't really cook when I was in Sweden - I took weekly cooking classes while I was there, but I wasn't a cook.  So the names of things were lost to me.  Oh, but I remember with fondness seeing the food and the taste! What fun we had going to bakeries for coffee and sweets.  I like the way the amounts of the ingredients are listed at the beginning and then again in the directions too.

Martha Stewart on the other hand has a system where the ingredients are listed on the left (with links to lots of ads for different places to buy things) and only the names of things are the directions.  " Topping: Whip cream and sugar with a mixer" is on page 2 when printed out, the amounts are listed on page 3.