I finished another Quilts for Kids!

This one I had planned on sewing together so the squares would be on point, but I goofed so just have strange corners instead.  The leader of our local Quilts for Kids said it would be okay so I went ahead and basted and free motion quilted.  I started with some feathers in each of the corners, but the pick thread makes it very difficult to see that detail.

I decided to try some unmarked Baptist fans, was afraid I would run out of thread so switched to orange peel design that would use less thread.

It's my first time for both of these.  It would have been easier if my working space were consistent instead of having the strange corners.

So this quilt has several firsts for me:
1.  The first huge mistake with piecing made it so I didn't get to try the on point setting as I wanted to.
2.  First feathers on something more than a practice piece (and those were done in 2012!)
3.  The first Baptist fans
4.  The first orange peel

I didn't break any needles even though I'm just getting back into sewing and quilting again.  Had planned on using some gold thread but that didn't work out so grabbed the one spool of pink that I had just to get going on the project.  My hand was unsteady so guess it's okay that the thread blends into the background in most cases.

I have another quilt with these materials that is made of all squares waiting to be finished.  I wonder how that will end up being quilted?  It will have binding made from bring the fabric from the back to the front.

This one was made with the top and back facing each other, then it was turned inside out.  I've only done this one time before. I think I should have basted this one even though my 'teacher' said I didn't need to.  There is one spot where things bubble with extra fabric.  Perhaps that could have been avoided with some basting.

Still it will be a nice quilt for someone.

It was pretty easy to move my tables so I had extra table behind the sewing machine and to my left - think I will be liking the new sewing space!

I just realized I hadn't posted a full photo of this project.

I think this is my fourth finish for QFK.

Here are I think better photos of the project.  Including a few toes! 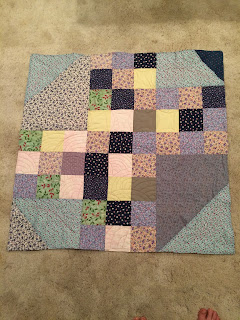 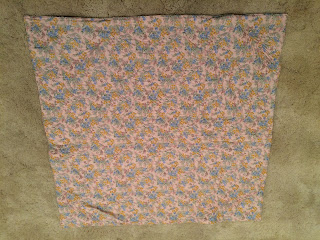