We had to get our tree this year at the Home Depot.  Usually there is a non-profit community organization that we get it from.  We bring back the stand from the previous year and they would give us a new tree with a stand already installed.  DH and I thought we had a Rubbermaid tree stand, the kind you turn the points to straighten the tree.  But once we got home realized we only had the stand from the non-profit (that we could find).  Anyway, the next day I called Home Depot and told them and they said it wasn't busy so I could bring the tree back and they would drill to install the stand. 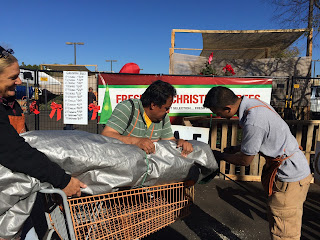 To protect the tree from losing more greenery, I wrapped the tree in a sheet and a tarp and put it in the car.  It took a while.  On the other end it took a while too.  The first two workers at the lot didn't think they could do the drilling but then Daniel came and remembered talking to me so he was up for the challenge.  He started drilling and then had to change bits to a larger one.

After he did the drilling we stood the tree up, unwrapped it and pressed down on the stand to straighten it, but the truck split then.  So they said I should pick out another tree with a bigger trunk.  I asked Daniel to just pick one out.  So he did and then drilled another hole.  Fit great on the stand.  He even helped me put the tree on the top of the car.  Such service! 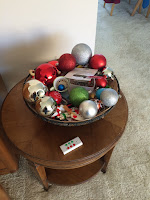 The tree is filled with lights at home now.  I think there are 19 strands of lights!

We thought my son and his wife would come by to help decorate and drink egg nog, but that didn't happen over the weekend.  So this morning my husband and I put ornaments on - it looks quite festive!  I put a bowl of ornaments and hooks in the living room,  just in case anyone comes by so they could put a few ornaments on the tree too.  The little remote on the table is a great little deal I got at Costco last year.  You plug something into then can use the remote to turn the lights on and off.  It's made it really easy to turn on not only the Christmas lights but other lamps situated in weird places... 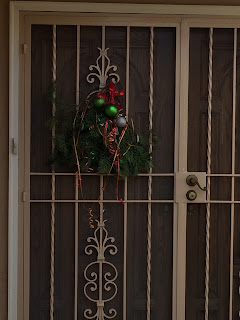 Home Depot had a big box of branches that we could take home for free so I grabbed a few to make a decoration for our elderly neighbor's door.  It would have been nice to make something for her inside, the smell of the tree is so nice.  But I am not sure if that would have been healthy for her.  So I used ribbon to connect the branches, to decorate it and to add a few ornaments.  Then I found some gardening wire and made a loop. When I went to her place so that it was better to loop the wire thru the door armor and to wrap it to secure there so I was glad I had cut the wire long.  It looks pretty nice - not professional but home-y (hopefully not homely!).  I put on her door and emailed to let her know.  Never know how she is feeling so I always email to set up a visit or to let her know I have left some food, etc.

If we had a hook or nail on our door I would make one for us, but that will have to be another year. DH told me the friend I know from his college made wreaths for friends and family - maybe I can get him to show me the next time we visit!  Would be a fun project to do with others.