This morning DH helped me make the guest bed with the fresh linens and to straighten up.  (I wanted it to look nice even though she wasn't staying overnight this visit.)

Then around 10:00 we left for Harvard Yard - in particular the COOP.  My friend C was coming for the day - next week we are going to NYC so today we were settling on the dates and where to stay.

We first had coffee at the COOP and chatted away - it was wonderful.

I've known C since 1974 when I spent the year in Sweden.  We have sporadically kept in touch.  First her husband was on sabbatical in Boston - so for my first time here it was to visit them!  I rented a car and we went to all sorts of places - so much fun.  We wrote letters back and forth - she had her daughter a year before we had our son.  We got busy and didn't write for while - then when DS was going into first grade we came to Boston again.  DH spoke at a conference but DS and I had a wonderful time walking around Boston and going to museums and looking at things.  After the conference we went to Plymouth Plantation for days and days while DH worked in the hotel room.  One day I was busy chatting with DS and I heard a man speaking Swedish - but it wasn't any voice - I recognized Cs husband - and turned around and there they were! We each didn't know the other was going to the East Coast or to Boston or to Plymouth Plantation.  It was wonderful.  We had a special dinner and the children played with the maple leaves - by the end of the day A was speaking some Swedish - titta! titta!  (look! look!).  So much fun.  They came to the west coast a few times and stayed at our place and we went to Sweden two times to see them.  In December C wrote to see if we'd be around the end of January and I told her we'd be in Boston - she asked if she could see us and if I wanted to go to NYC.  Of course I said yes.  It's great that things are finally coming together for that trip.  We now have our train tickets and our hotel and will be there for 6 nights!

We stopped to look at some books - then walked back here and got the computer out to finalize the hotel and nights. 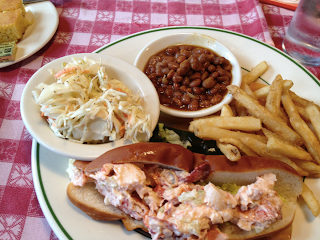 Then DH packed and we all left - for the red line T.  DH rode with us as far as Park - where we got off, made our way to the green line where we got off at Government Center - right in front of Faneuil Hall!  (He continued on to meet his friend - they are going to RI for the night.)

C and I went to Durgin Park Restaurant in Quincy Market behind Faneuil Hall (she had said it was one of her favorite places to eat in Boston).  We had lobster rolls and split a key lime pie.  Yum!

Then we walked to the train station - bought our tickets to NYC and I saw her off.  The train tracks are not announced until the last minute so you have to stare at the board to know where to go so you get a good seat.

After that I walked back - stopped at stores to try on jackets.  And I mean stores and jackets.  Many of them.  I passed by the $270 ones, and started with $140 ones and end up with a $29 one that was missing a belt and really is too big for me - but I think with the extra layers that I have now I will be fine.  Especially if I can get some ScotchGuard to spray on it!  I made it back to Park Street station and got off at Harvard.  It started to rain a bit on the way home - stopped to get some fruit and yogurt (and yes an oatmeal cookie) before coming home.

The temperature is very mild - above 60 degrees I think - I didn't need to turn the heater on!

Started the laundry, called and chatted with C for a long while, sent some photos and text messages to DH and now will go to bed!

Oh and I walked all day in my new rain/snow shoes - very nice.