Yet again today I was not able to get up early - wasting too much time....

Made oatmeal for breakfast, watched a bit of the news, answered some emails for business and organization, started to plan my next bit of sewing - and then realized that really first I wanted to get new shoes with plenty of traction so I don't have to worry so much about walking about after or during snowing....

DH needed a break so he came with me to Harvard Square area - we went to a place I had researched last night for Uggs and Smartwool socks (recommended by DH's cousin - will I ever be able to call her my cousin???  I guess I can call her my cousin in law!).  Anyway, the store was out of Uggs and sent us to Porter Square to their other store....  But as we were leaving I saw another sporting goods store and took a chance.  They also did not carry Uggs, but there was a client trying on shoes that I chatted with and she said (as websites said) that Uggs were not really water proof.  Since I've been stepping around lots of puddles and can't even see them in the night this was a good point.  So I tried on what she was trying on - but I couldn't wear the calf high boots - I felt like I had skiing boots on - they were not comfortable at all.  And probably even more it would be a big deal to put them on an off as the opening to put foot in wasn't very generous. 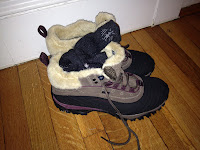 So I tried on a few more getting shorter all the time.  I ended up getting these shoes.  They are water proof, insulated, and have a good sole for traction.  I also got a pair of longer socks - SmartWool and another set of long johns (pants and shirt).  It ended up being $119 - more than I expected, but less than the $150 pair of Uggs that I had talked myself into getting.

I wore the shoes home - store said I could do that and still return them if they did not work out.  They felt pretty good - and peeking under jeans they look nice too.

While I was doing all that trying on and talking (oh I also tried on a down long jacket that looked surprisingly wonderful but was $240 at half off so I didn't consider buying it) Bernie was looking online to find a restaurant to eat at.  The Dunkin Doughnuts was too crowded so he just did that.

He found a very nice place that was on the way home - The Boat House.  We had the best mussels with chouriço (Portuguese sausage) - who knew that would be a good combination.  It's a new restaurant.  The mussels and hosue salad were a real treat.  I recommend it!

The shoes were fine on the way home.

Made plans to meet up with my friend from Sweden.  (She will need to leave around 2 or 3, then I will go get the supplies I need to continue sewing the Quilts for Kids project.)  DH made plans to go to RI with his friend.  We watched Downton Abbey.
Posted by June D at 8:58 PM