To remember how to do binding I made this little mug rug for my husband.  I practiced the sharp stipple (or the way I misremembered it).....

Leah had mentioned to be careful about having thread buildup at the points so I really was conscious and kept the piece moving during the entire process.  Looks good on the top where I was sewing - but I can see thread build up on the back.  Since the thread and back fabric are the same color it doesn't show up that much.....  Now that I am home and next to computer I see I misremembered this design - it's sort of a preliminary sharp stipple....

For the binding the other people recommended 2.25 inch strips so that is what I did.

The first time I joined the strips I goofed and ended up with a strip that was part front and part back of the fabric - so I cut that off and did it again - I think it's front facing each other to be right.....

I had to do two joinings to this little quilt - and wouldn't you know it, one of the joinings ended up being in a corner....  So I had to trim that back a bunch to get the material to flip and pretend to be correct.

After I sewed the binding on I folded the corners and pressed the fabric to help it know where to go - then I folded the corners on the back side and sewed it down .25 inch all around.  I don't like having the extra fabric - and when I really do it on a quilt I will try to borrow a machine with a decorative stitch so it looks more finished too.

When I do this on a real quilt I will do with 2 inch strips and will be really careful on the corners to be sure there is no extra bulk.

I think for my big star quilt I will bind in brown but use the beige thread so it matches the front of the quilt - I'll sew the binding on the front first as the seams are so uneven.  I think I will sew around the outside of the quilt to be sure I see where the binding should be put - but maybe not - I'll decide later....

At the quilt workshop they suggested instead of pinning the flaps and pressing to fold the fabric and pressing - we also drew the cross of the four folds so it was easy to pin and be sure I was in the right place.  And she suggested 2.25 inch strips as she cuts the quilt so the back and batting are about .25 inch larger than the top - that way her binding is filled with this and looks full.

I'll do some more sharp stippling practice on another piece later....!  AND will make some more mug rugs to practiced binding too!

Practice Tuesday PM:  When I finished some other work that I was doing on a sandwich I decided to do another practice at sharp stippling.

Just to be clear I'm going to paste some images from Leah's site to show what I'm supposed to be doing.  Next time I'm going to have this images in front of me so I have a real model of what to do (as my memory isn't working on this one!) My practice tonight just looks like something a toddle would scribble!

From Leah's Site:  Just like with Stippling, start Sharp Stippling by quilting a row of very simple wiggly V shapes:

Gradually add bends and extra wiggles to add more complexity with the next row: 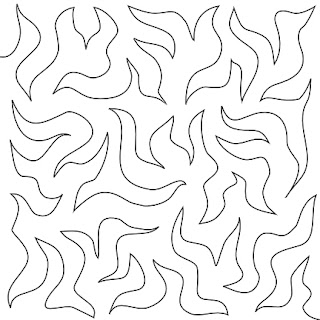 I had thought I would have time this week to put together or find a quilt top that was ready for quilting, but was unsuccessful with that so just did samples for this week for Leah's Wednesday Quilt a Long.  I just have to keep practicing so I can make the jump from being a beginner.

My question - my thread keeps jumping up and then I have to stop and pull it out and put it back on the machine.  That seems to solve having extra loops or shredding or breaking.  I'm wondering if there is something I could buy that would hold the thread spool and weight down the top of the spool but some how let the thread feed evenly too?  Or is this a user-error on my part for the way I'm sewing?

Leah announced today that there will be no new posts during May - she timed this so it saves me a bunch of time.  We are having two sets of house guests and I was thinking I'd have to move my sewing area to my room as they will be staying in the sewing/guest room.  So instead of moving I will just straighten up!

I'm doing this as part of Leah Day's Quilt Along Wednesdays on the Free Motion Quilting Project.  It's a wonderful set of online lessons - Leah does a terrific job of guiding us through the various steps.

At the bottom of each of the Week pages there are links to the other folks who are participating - please take a peek to see what the others are doing!  Then you will see really nice examples of people who are doing the lessons.

Click on the Leah12 link to see my progress on this project.
Posted by June D at 10:52 PM