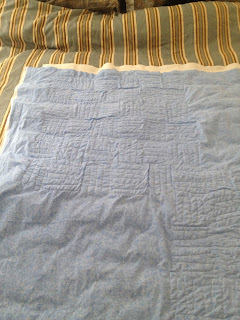 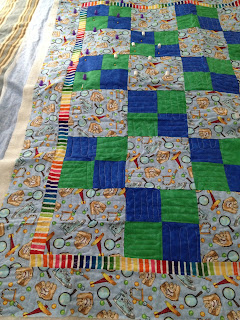 I did more work on the top - now about half done with the FMQing.

When I did the second quarter I started to think I should vary the stitching so I put in some stippling, swirls, and what not.  It looks better I think keeping the consist design - except maybe the inner border could be different.

I am enjoying doing the stitching.  The machine is working like a dream - it would be better if I had a drop in table to put it in, but the pinmoors that I got from Leah Day are working like a charm.  They make it so much easier than safety pins or thread for basting! 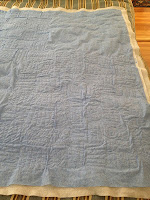 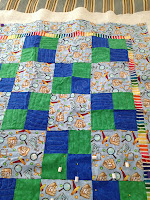 I do notice the little bubbles of fabric, mainly on the back.  I put so many pinmoors in I'm surprised there are any, but it still will be a nice quilt for someone to have.

So today I just stayed inside until the evening.  Watching TV and FMQing.  It was a nice day.

I'm not liking the quilt itself though - I'm looking forward to being done and being able to work on projects that I can keep or give to my family.

I called the people who prepared my mom's advanced healthcare directive as the dates are not the same on the different pages - hospice noticed this.  The lady on the phone said she would send the correct pages via email.  When we had the documents drawn up they put the pages in the binder - I didn't notice the date discrepancy.  I am not pleased that after all my mom's efforts that there was a mess up - hope they will just send the file and that will be that (that they do not charge for this!). 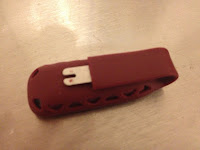 The tab on the back of my fitbit broke a few days ago.  I have been able to collect the tip and squeeze it back on, but tonight I pulled it off to compare my steps with my DH and the tip flipped off and I can't find it.  It scratches the material I pin it on when I wear it so I wrote to them to ask for a new cover piece.  I don't want to wreck my clothes with the fitbit  It's different than the one I first had, bu this one has lasted only five months so that's not a very good piece of equipment.   I have had several problems with this fitbit - not synching correctly or at all - not holding a charge.  But fitbit would not send me a new one so I have to charge it a few times a week and have to put up with having the website and phone updated when it feels like it rather than when I am near the computer or turn on the iPhone app.  It's a drag. It's fun to know how many steps I take so I hope they will hurry with sending me a replacement.