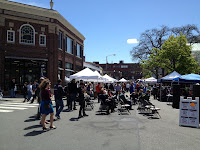 This morning we got a pretty early start (for us) and stopped by Harvard Square to see the Mayfair.  It was a massive collection of a variety of booths - food, crafts, businesses, fun!  The roads were closed off and the streets were lined with the booths.  So many things to see and buy and eat and think about.

DH was intrigued with a folding wooden chair that provided extra support for his back - I was interested in food!  We shared a plate of Korean food Bulgoki YUM! from Takemura on 18 Eliot Street. YUM!  It's a Japanese restaurant with Korean food too - anyway I'll have to go there and eat sometime soon!  Their dinner menu has pretty high prices - I got rice, cabbage, onion and half beef and half spicy pork bulgoki for $7 at Mayfair. That is closer to their lunch prices...  We also had a plate on Indian food that was very good too - from a restaurant on Newbury Street. 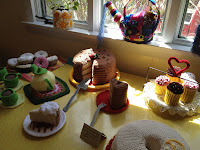 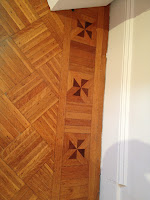 Then it was off to the T to go to Davis Square!  There was an open house for a nice place - problem was it was right next to an apartment and parking lot - probably too close to the city part of things.

After that we went to an art gallery with a twist - it was fiber art.  Fun food made of yarn - and other things.  They are having an event in August that DH said he would enter - something to do with maps.  So that was fun.  We stopped at Goodwill and I found a super little shirt for my son's friend - then we went to Dunkin Doughnuts for a regular iced coffee - it was delicious!  The coffee cake muffin is very good - DH gets those and they are always better than the doughnut I get.  This time I didn't bother eating it all.... 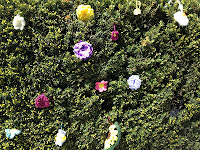 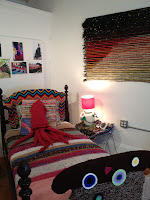 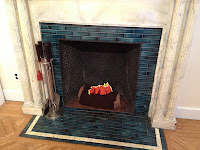 Then instead of going on the T right away we went out a different door and walked along a parkway - a bikeway built on top of the T line.  Beautiful trees, benches, it was very nice and made us realize we liked this part of the city too. 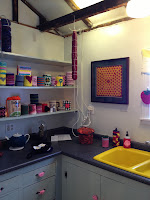 Sometimes it's Cambridge, sometimes it's Sommerville...  We made it to Mass Avenue then saw sign for a garden to be open - it was an oasis in the city - so restful.  Water, chimes, rustling leaves and a few flowers too. 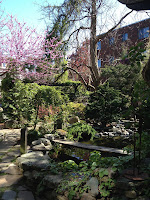 We made our way back to Davis and took the T to Harvard so DH could get his chair - and I got him a grilled sausage sandwich.  He took the bus back while I walked and enjoyed the last of the sunshine for the day.

We watched an episode of The Tutors.  I made phone calls to check on mom and other things - now he is listening to a podcast and I am not sure what I am going to do now.  It's dark, a  little chilly but I think I'd like to walk some more.  The light in the dining/sewing room isn't very good at night time.  I could set up the machine but don't think I should sew now.... 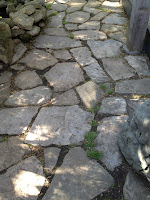 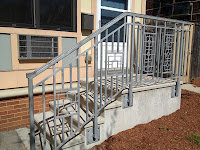 The people at hospice seem very organized and nice - seems things are covered pretty much under Medicare Part A - there will still be some medications we get thru Secure Horizons but they will write the prescriptions, etc.  They will fax a form for me to sign and return - seems the only remaining things are the doctor to okay the students to do upper body exercises and to get the okay to transport her back to VLM in our van.