I've blogged about this project before, for such a little project it has gone thru several changes in it's creation.  First it looked sort of like the Nazi symbol, then was redone to be this square.  But it had so many ripples that it was taken apart again and partly sewn back together.  I left the final border off and will add that after the quilting is done...

I did Angie's wavy lines on the larger center square, then went back to cross over them.

Then on the outer triangles I made a design with different types of waves to fill that area in.

I'm really liking the way the wavy lines poof up, and sort of go with the design of the piece too.

In class tomorrow I'm going to ask someone to show me the proper way to tie the threads off.  I've been using the Clover cheater needle that Leah Day recommends, and added a knot after rewatching her video, but the teacher at the class I attend showed a way to pull up a loop so the two threads end at the same place so that would save a lot of time from what I've been doing. 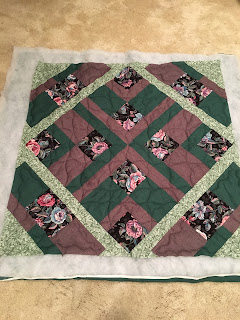 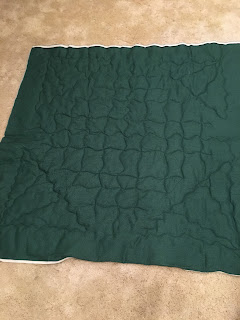 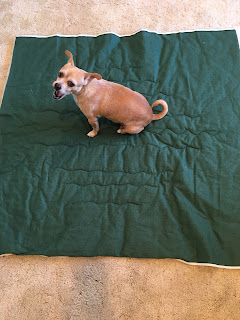 As soon as I finished the initial lines I put it down for a photo and Buffy appeared from thin air and sat right in the middle of the quilt, so I had to take her picture!

Yesterday I took her to Petsmart and they trimmed her nails, brushed her teeth, and cleaned her ears.  Her teeth were so bright afterwards!  I wish they would show me how to brush her teeth but actually they hid her away from me while they did that and the ears.  I'll have to learn from videos posted on the web.  I think it's better to have someone else trim her nails though, it was always stressful when I groomed our cat's nails.  They had a good set up for doing the nails in the front part of the grooming area, and did give me a coupon when I asked if they had any, so I got 15% off the food!  But I'd rather have a set up where I can at least see Buffy all the time whenever she is being groomed.

I gave her a bath when we got back, her conditioner makes her hair so soft!

I'm going to look into videos for training dogs too.  She sometimes will run to grab a ball, but doesn't know what to do with it really after that.  It would be fun for her and for me if she would bring the ball to me so I could toss it again for her to retrieve.