As with many things in my life, I spent a ton more time thinking about basting than it actually took me to do the project...

I set up two tables in the back yard and put short candle holders on the table to help hold down the fabric.

I loosened the batting by putting in the dryer for a little spin, and first put that on the table.

I had a little trouble being sure I had backing that was a little larger than the front since my helper really enjoyed jumping on the fabric once I put it on the carpet! 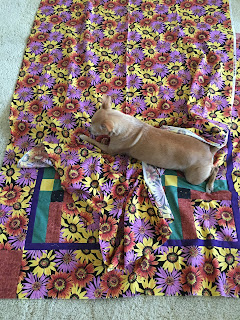 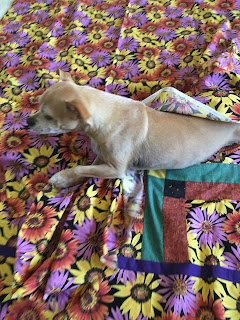 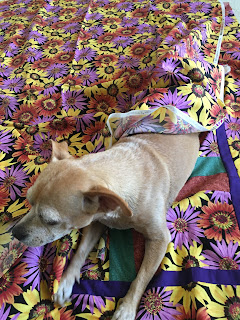 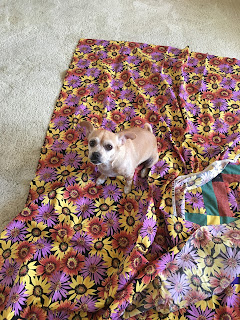 Once I had things spray basted I put the quilts on the floor for a photo, and my helper, Buffy, came down the stairs so she could enjoy the bounciness of the quilt sandwiches.... 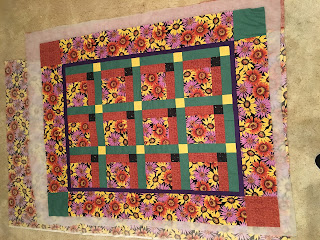 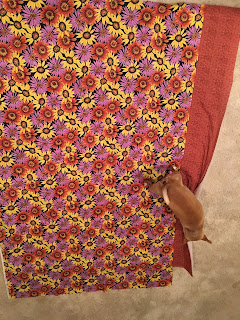 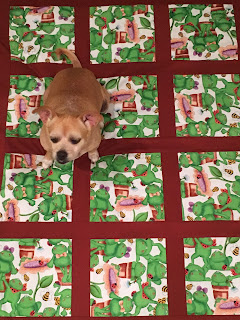 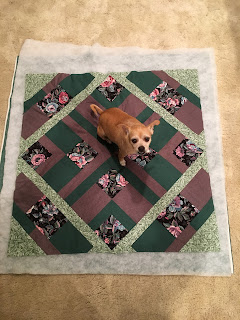 Well, my plan is to get a photo of the quilts so I can draw on the proposed quilting!  We'll see how that goes tomorrow.

The teacher I mentioned previously who does not want us to take photos of any of her projects or projects we create in her class following her patterns, is a big proponent of binding /before/ quilting so I'm planning on trying that with these three not from her class so I can share photos charity quilts.  The smaller one will have wider binding so it will end up being around 42 inches square.  The middle one will be done first as it will have regular binding.  The larger one with the pieced backing will be around 45 x 60 inches, but I'm going to try my hand at binding so the edges have gentle scallops.

(I also have a few quilts that are already quilted as part of 2016 One Month Goals that are ready for binding too so hopefully I'll get pretty accomplished with this binding step by finishing them up! Photos will be coming! )

I didn't really keep track of the time, but think it finally took me under three hours to get these three quilts where they are now.  I had to plan which fabrics to use for the backing, find the batting in my closet, and in one case sew the backing too before actually spraying them.  Also had to press everything.  Lovely that no pins were needed so far!  Even after Buffy jumping around them the pieces are secure!

We went over friends tonight to watch the surfers and sunset while chatting, sipping wine and nibbling on snacks. 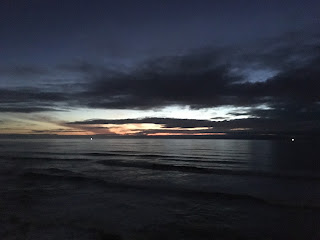