Ripples in one Charity Quilt Top, a Flat Charity Top and Woodworking Progress

Well, it's totally appropriate that I finished the second try at my green Quilts for Kids top today, as my top has ripples. I've read that ripples are a problem in quilts, but until this project I'm not aware that anything I put together had them! 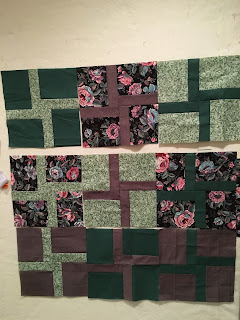 First, I removed seams from the dark green crosses I put together a couple of weeks ago so I could rearrange the fabric into a different configuration. 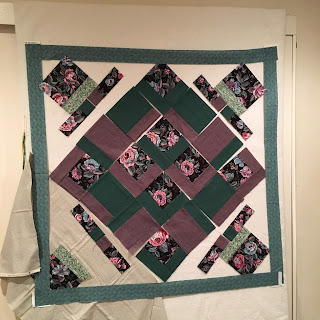 After deciding to make things more symmetrical and on point then I worked on what to put in the corners. 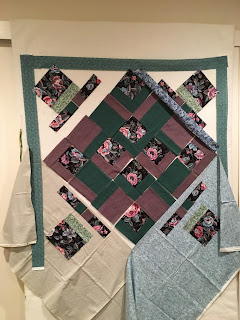 After deciding to use up more of the pieces in this one quilt, rather than saving them for a second quilt I sewed things together.  I started by sewing the seams just to see how things would work. 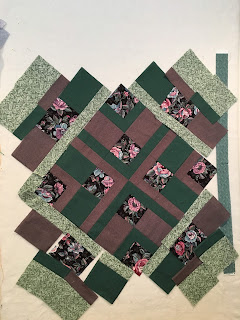 After checking to see the appearance I trimmed the corners and put different fabric up just to decide on what fabric to use for the borders. I'm pretty sure, at this point everything is still flat. 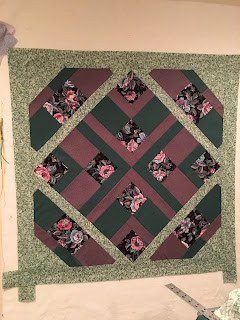 I measure and sew the top and bottom border, and that I think is when I start to see this huge balloon of fabric.  After sewing two borders on, I remove one (or maybe I removed both) of the borders and sew the outer seam without any thread as I sort of remember seeing someone do that in a quilting session and I think they did it to help fit in two different sized fabric pieces. 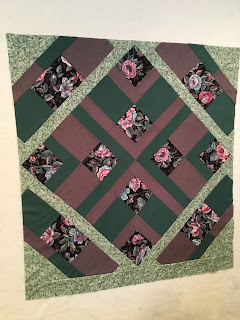 I can sort of press it on the design board to get it almost flat so decide to storm ahead and sew the borders on. 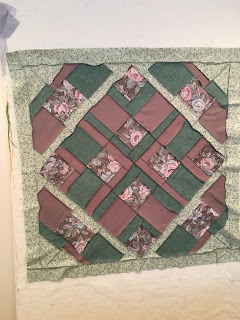 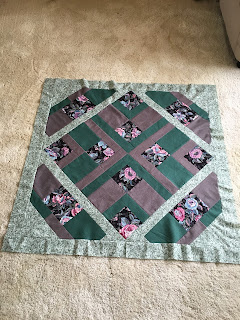 The ballooning seems to start farther back, somewhere in the pieced corner area.

I don't usually use the seam ripper, but I'll remove the seams so I can return to the flat stage again.

Hopefully I'll figure out where I went wrong and learn from the experience AND end up with a nice quilt for Quilts for Kids!

I've made no progress on this month's OMG husband quilt as I really wanted to have this second charity quilt ready to quilt.

I didn't even share though this other charity top that I cut and put together at the last quilting Saturday group session.

They had patterns that were printed out and boxes of fabric for us to pick thru, but really the choices seemed slim unless you wanted juvenile or patriotic designs.

The pattern is really written up well and I'm going to get or check the book out from the library!

There is a chart telling me how many strips to cut of each fabric, and what second cuts of the strips will be too.  Then it tells me how to assemble the quilt blocks, and how to finish the quilt top.

It's not that much fun though for me to just follow directions.  But I guess I need to take a step back and do more of this before I storm ahead with just trying to put fabric together the way I did for the green ripple quilts for kids project.

On the woodworking front, I've made progress but haven't been completely successful there either... 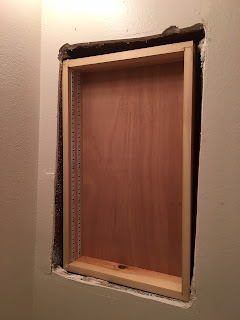 The teacher said he could help add a frame so it would fit, but then I would be losing a lot of space to put things so I put this project aside for now.

And stormed ahead with making soil sifters or riddle.  My Dad had made me one with a 1/4 inch mesh that I used so much the wire mesh broke thru.  By mistake that got thrown away so I have been without for while. 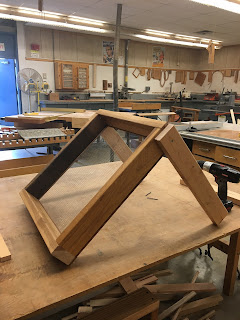 The legs fold back so it will be smaller when being stored. 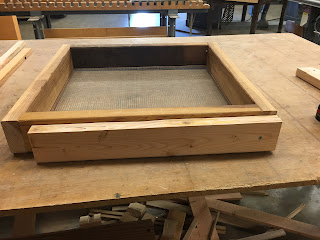 Even though I haven't tested using this model, I'm going ahead and making a third one as a gift and taking photos to document the steps for making it.

Step One: Cut the boards.  Because there are two of the same size I mounted a stop so both boards would be the same length. 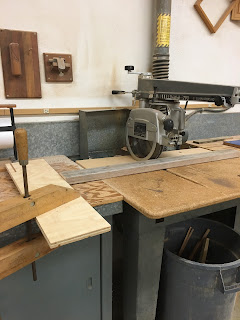 Step Two:
I put the pieces in a vice and sanded the rough sides off. 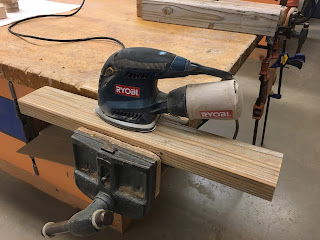 Step Three:
I arranged the wood and then used clamps to secure the boards. 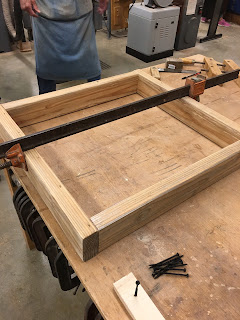 Step Four:
Got the bit for a drill so I could make pilot holes and then screw the pieces together.  This took awhile for me to figure out.  Have to hold the end and twist to put things in then remember which way the device should turn to put in or remove.  There is also a little bubble to look at to help put the hole or screw in so it's at the right angle. I tested the size of the hole with a piece of scrap wood. 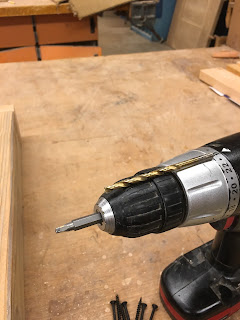 Step Five:
For each corner make two pilot holes and then the screws in.  I didn't time myself, but this took so long that I wasn't able to finish the third box during the class session.  I had a very hard time pressing the bit into the wood and getting thru.  Maybe I should have clamped the box so it was connected to the worktable so I could have used two hands! 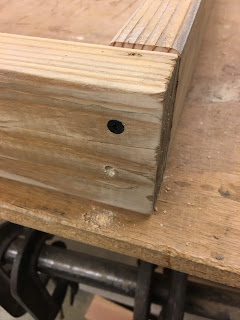 Step Six:
Cut the mesh and fold back the cut edge to make it less sharp.

Seven:
Staple or screw the mesh to the box.

Eight:
Cut wood strips to cover the edges of the mesh, and screw in.

Nine:
Cut legs, put screws in.  I just used scrap wood for the legs.  The teacher said really I should use something else (a bolt and nut?), as this might unscrew after a couple of years, but to get it done and because it would work for a while, we used what he had in the workroom.

Now in theory at least, I can proceed with removing the grass, getting rid of rocks, planting a few native plants and applying mulch to the two areas in the front yard.