Ate at Atwoods - very nice place.  I had the Hot and Healthy soup and a 2 inch round sloppy joe slider. Soups was lentils covered with curried chick peas on one side and wilted spinach and broccoli on the other with toasted pumpkin seeds. Great combination.  DH had a real Cesar salad then cup of tomato soup and cheese sandwich.  All Yum.  The descriptions are not on their online menu - had more details.

Went back to Marshals to return the two jackets - no problem with that return.

To fabric store to look at patterns... There were two patterns that I thought might be good:

Couldn't decide, was chatting with the lady who works there and she gave me one of their discontinued dress patterns and suggested I study the directions to see if I could do it (after I told her the last time I sewed anything was 7th grade.  But as I type this I remember I used to sew clothes for DS before he went to pants with zippers - so much fun.  I would take one of the designs from the fabric and iron it on a t-shirt and then outline that with paint to make a little outfit.  It was like a 1/4 yard of material needed.  Dinosaurs, rockets, bears, watermelon seeds and more.  DS was so sweet to try all the pants on - the watermelon seed one I used a new pattern and they ended being way too big.  He said it was okay and went upstairs to put on several other pants and then stuffed the waist band of watermelon ones over in the top of the other pants so they wouldn't fall down and he wore them for 4th of July as he knew I had made them for that day.  Such a sweetie.  How could I forget that?)

On to Shaw's to get ingredients for DH to make stuffed mushrooms, probably got a few more items.  I know I picked out chocolate chip muffin mix - not sure what all he got!

Then we walked around Shaw's and went on the side of a big street - over a bridge to Target!  It was very close, but by then it was very dark and cold.

At Target I returned the hooks I got that were not for humid rooms - no problem with that return too!  Then we looked for new hooks, DH got socks (can't believe it he has been wearing the same pair since coming here) and toothpaste (can't believe it he bought a 6-pack at Costco the month before we left and left them in San Diego).  I found powdered cherry drink - now I can stop drinking all this 200 calorie a serving stuff that I have here - hurray! Looked for long shirts (wool or spandix) to go with my new longer jacket.  I found a few but will come back again without DH as it takes so long to try things on. 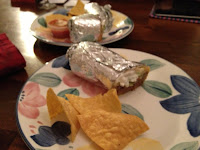 On the way back we cut thru a different neighborhood and came out just where we wanted to be - and as a bonus found a fast food Mexican place (across the street from the $25 a plate Mexican place) and grabbed a burrito and taco to eat at home - tasted very nice. Could have used a little more chili but the burrito was rolled the right way so every bite had a combination of all the foods inside the tortilla.  The taco had different sauce, nice cilantro and lettuce.

Checked my email, and Livemocha wrote they were not only refunding my $99.95 but were still giving me one year of gold key access!  Yeah Livemocha!  A few years ago when I was taking Italian lessons I found them and was really impressed with the trial version - now to actually have the gold key access will be wonderful.  Now though I want to work on German or Swedish or Spanish....