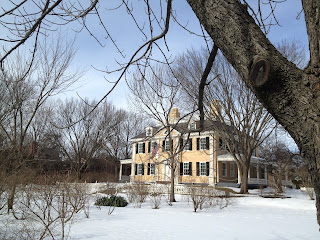 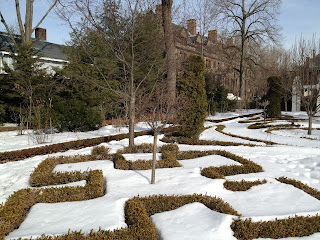 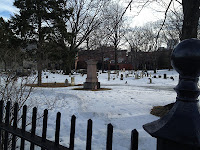 Today I walked thru Harvard Area to get to the Longfellow House - there was a special tour to celebrate Washington's birthday as the house had been used by him as headquarters for the first 9 months of the war.  It is lovely that the house has been preserved so well.  The ranger who gave the tour was very interested in poetry and literature - nice job.  The head ranger, it turns out was new to the area, came from Cabrillo National Monument in San Diego.  So we had a nice time chatting at the end. We both enjoy not having cars here.

Then I walked farther along the street to see the other houses he told me about and to just get a sense of things.  Walked back on a different street and saw new places: schools, houses, theatres, and churches - even a cemetery.

I went to the COOP to get a notebook with quad rule - and had a good time looking at books too while I was there!

Walked down Mass Ave to Life Alive where DH called ahead so I didn't have to wait for food, just paid and left for home.

We again split the food and enjoyed it a lot.  I got soup for tomorrow that we will have with food we will cook.

We only have one more episode of House of Cards to watch - and I finished the Death Comes to Pemberly book - all the loose ends were tied up nicely.  There was it turns out a character that I didn't think was a major one that had a major part in the end - actually two of them but the one I didn't pay attention to at all when they were introduced at the beginning in the review.

Tomorrow it will snow in the evening I think so I think I will wear tennis shoes just to have lighter shoes on while I walk!