My first try at this I goofed with the cutting.  I remembered that the points needed to be away from the sides so they would not be lost, but cut it so all the lines went side to side (resulting in extra little triangle pieces).

After looking at the technique pages again and more closely I figured out how to proceed with making a few of the blocks...

Here are my first two blocks!  I included the trimmed fabric just to show how much is trimmed away.  I started with 13 inch squares - ended with 9.5 inch squares. 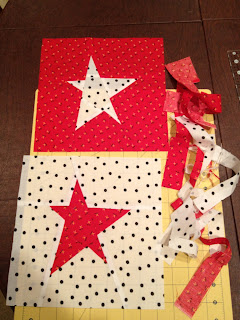 I went ahead and finished the green stars - it looks great - and there is no extra seams in the corners.  These were cut with out lifting the fabric so there are little triangles at the end of each point.  At first I thought I had really made a mistake and would have to trash the fabric - but I'm glad I kept it as I was able to get two more 9.5 inch blocks!  Notice that the green blocks did not have as much trimmed away - but there were more seams to sew...  I might put the green stars in the project I'm still working on after the Marston/Moran workshop....  (I only need one green star I think, wrote to see if the other one could be in the drawing but didn't get a reply, so I'll use it myself somewhere!)