Part One of the Quilting Adventure:

In Leah Day's Explore Walking Foot Quilting, she has folks begin with making a very pretty rainbow log cabin.  I have so many unquilted tops that I just couldn't make another one.  So I decided to use my quadruple Irish Chain for the first project in her class.  I think this was the second or third quilt top I finished.  I know it was the first I made without a pattern.  I had liked the Irish chains I had seen, but wanted more colors.  So I figured out how to make this one: 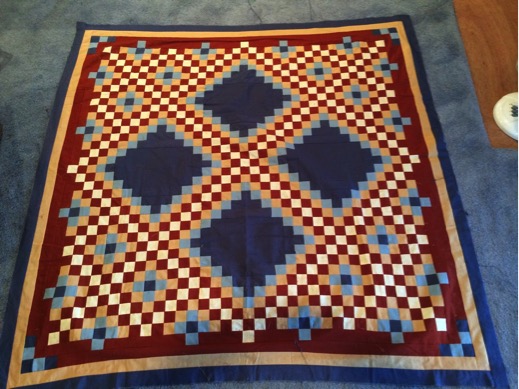 I can't really remember how I made it, but know it involved make strip sets and subcutting, then putting things together.  (I forgot to take a photo of the flip side of the full quilt, but even looking at the back it is difficult for both a quilting friend and for me to to figure out how I sewed the pieces together. We couldn't find the block lines.)  I remember when I was sewing it how I was shocked at how large the dark blue parts became, and how much more of the beige and rust were becoming the face of the quilt.  I didn't draw and color things out to scale, I just figured where the pieces would go to make the design.  In my mind this was going to be a blue quilt with rust, beige and lighter beige accents.  When I saw what it had become, I started adding more of the little light blue/dark blue center bits, instead of making more of the large dark blue areas.  I extended the ends into the first border because it made the design float and was, I thought, rather cool looking.  I added the extra blues in the corners to also try to have more blue.  Immediately on finishing the last border I remember thinking how I should have made that border wider as it would become very small once I put on the rust binding.  Fun problems.

In those days machine quilting was new.  No one around here was showing how to machine quilt things.  I didn't want to hand the project off to someone else to finish up.  So this project sat in a box for around 26 years.  Was that the right decision?  I'm not sure. Well, probably not.  It would have been nice for my son and husband - and for me -  to be in a house with quilts...  But I really wanted to do the entire quilt myself.  So now with Leah Day's help, I will be able to do that.  I have been practicing on charity quilts, and gift quilts. I will continue to do that, but now I'm starting to work on a quilt that will be used in this house!

I pulled it out now to repair a piece that had wax on it, and to use as my first practice quilt for Leah Day's Explore Walking Foot Quilting project.  I was planning to do the quilting she prescribed on that quilt on this quilt...  But now I may change things up.  I'm still thinking.

Her quilt is made so the log cabin blocks are arranged so the final quilt appears from a distance to be one large block.  Here is her quilt with the quilting.  She has just two quilting designs on this 80 x 80 inch quilt.  In the center there is what she calls a giant bright star, surrounded by several concentric squares, and then in the corners she has a variation of the bright star (each corner has a quarter of the bright star that begins in the corner and goes back to the concentric square).  It's completely doable with the book and the videos on her site. 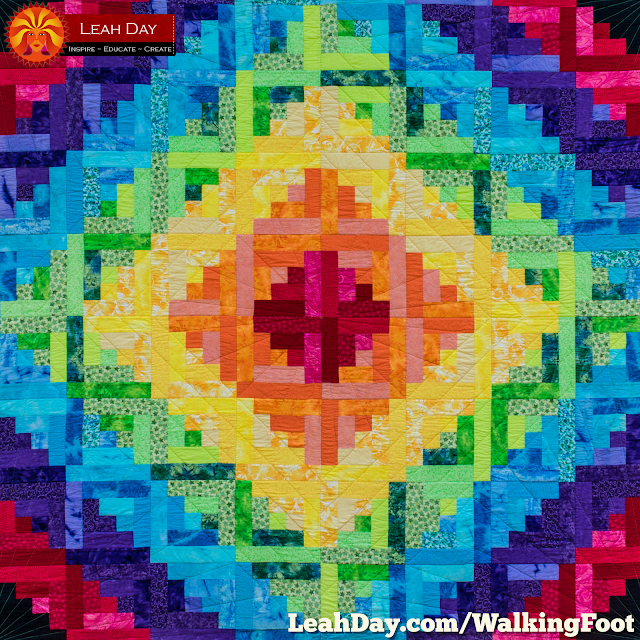 I'm thinking that I perhaps should have a bright star in each of the four larger blue parts, surround each with a concentric square and then put a few concentric squares around all those and then continue as Leah has shown. Instead of changing thread colors, I'm planning to use my grey for the top and bobbin of the entire 60 inch square quilt.

So right now I have just sewn the initial X in the center. I used painters tape to do the marking. 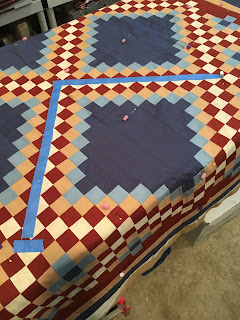 And ta dah - here are the first two lines of quilting on the quilt! 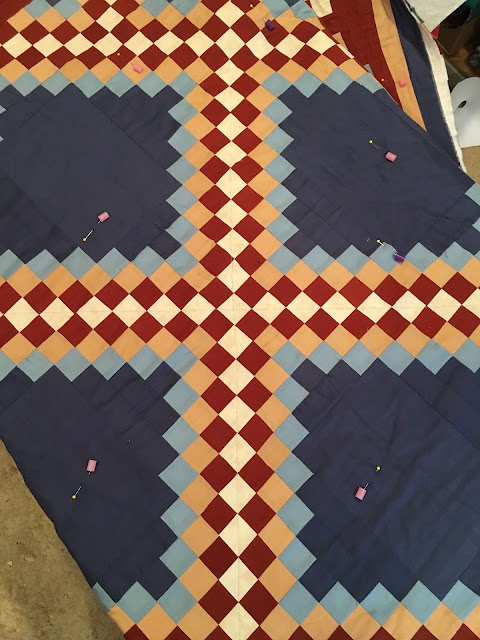 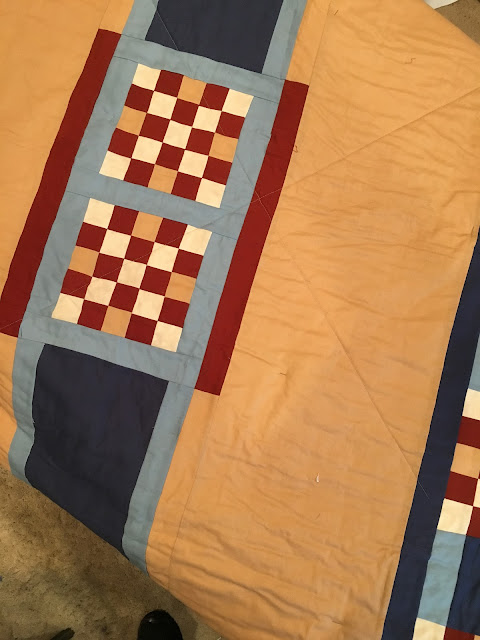 (I spray basted this project, so that is why there are not many pins.)

I created this backing made of left over bits and fabric when it was not 'a thing' to do - also then it seemed solids were not a thing.  But I sure like them. When I was sewing the quilt I liked the back of the quilt more than the front.  Now I can appreciate both sides. 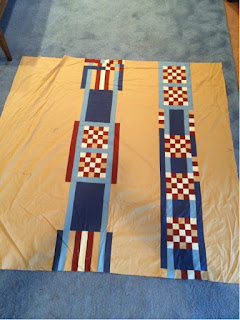