Leah's new design is called Desert Sand.  She has words and video on her website @ https://leahday.com/pages/how-to-quilt-desert-sand-walking-foot-quilting-tutorial

Took a couple of looks at the video, and the book to plan out my initial quilting line.  Although mine looks different than Leah's, I'm really pleased with it.

It took me longer as I misplaced the fabric I had cut to make the backing so I had to get out other fabric and make up a few blocks.  In the process I straightened up my sewing room a bit so that was good I guess.

I used some new-to-me basting spray to put together these sandwiches, and didn't notice until I was about half done with the stitching that the places where I double sprayed have a different color.  You can see in the photo below... 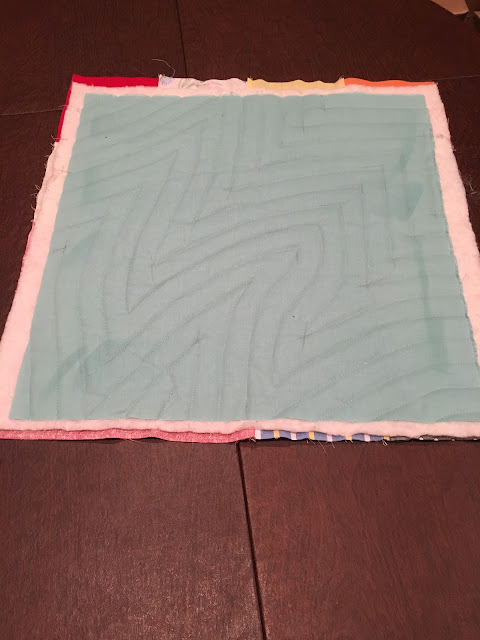 Doesn't show on the back as far as I can see... 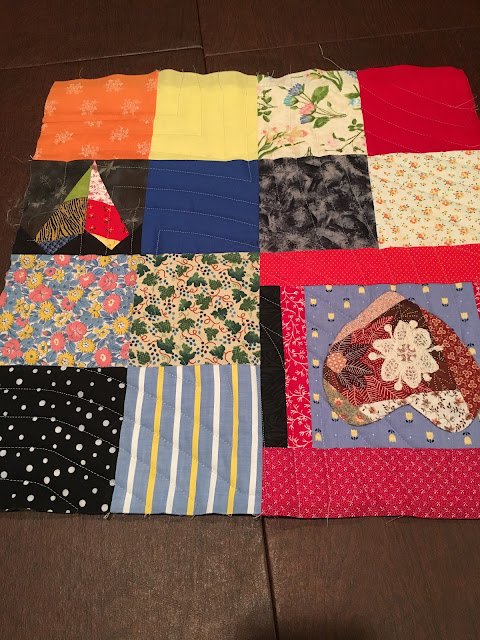 I had prepared two sandwiches at the same time, so I removed the fabric from the unquilted one and put it in the wash with some towels. (thinking the heat and/or soap might melt it away) 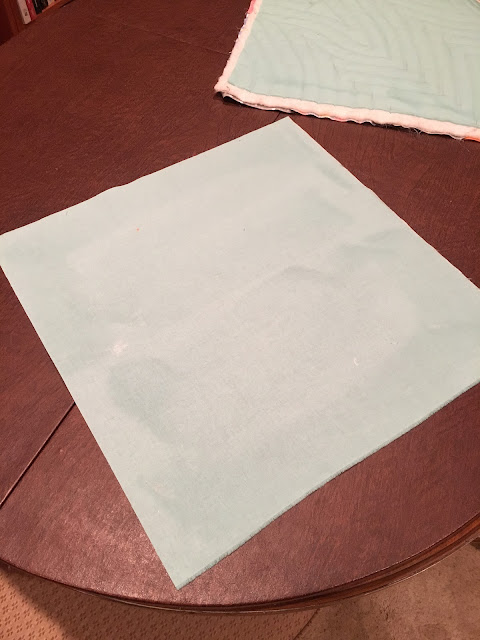 But the stain did not go away.  I used 409 to remove the over spray from the counter so I sprayed the fabric and was able to get most of the glue off the back fabric with a  toothbrush, and washed again but there is still some color.  With work I could remove all the glue.

409 won't help the desert sand sample I finished up unfortunately.  That glue will always be in the quilted sandwich. : (

This is the spray I used for the basting.  A friend uses it and recommended it.  (It's less expensive than the stuff one buys at quilting or fabric store.)  But probably she sprayed the batting instead of the fabric too so there is no problem then.  Also she sprays outside on a piece of plywood that she doesn't care about over spraying, so guess she doesn't double up on the spray.  And she perhaps has only used with dark fabric.  So I still think there is a chance of using this for quilt basting.

Added: I blogged about my friend's spray basting when she helped in 2016 - in rereading that see that she usually used an unknown to me 3M product.  She sprayed on the backing, applied the batting, then sprayed the batting and applied the top - and the top she was helping me with was all dark fabric.

But I will use Dritz or 505 Quilting Spray Adhesive again for real quilt tops.  I'm glad this was just a block that was wrecked.

** I just searched for "Quilting Spray Adhesive" and see there are several other brands to try too...