I have finished my February One Monthly Goal and am linking to OMG site...!

First I sewed my Cultural Fusion Windmill blocks together..... 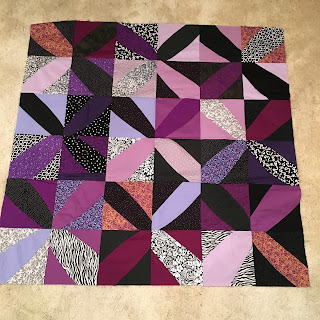 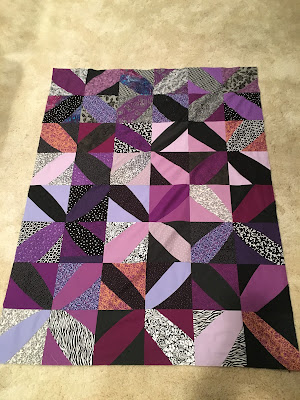 Then I decided I wanted more length, so I looked for appropriate fabric in my boxes, sewed another row of blocks and added them to the quilt.  It is now about 45 * 60 inches!
I decided to use solid Kona Black for the backing, so I had to sew two pieces together.  There is one seam in the backing...

My friend from the Saturday quilting group mentioned last week that she liked to spray baste, so I thought since I had won a can of 505 spray basting at the holiday party, that she could talk me thru how to do the procedure.  Instead, she generously offered to have me come to her place and she showed me how it was done!

To be honest, she did most of the work, but I did spray the last row...  There are no photos of me spraying, but really I did!

More of the batting was smoothed and then sprayed, and more of the top was smoothed down.  Then we moved the quilt so the next row was visible and everything was repeated again.

I did the last row.  When I finished we put in a few more pins, flipped it over to double check how it looked on the back.  She unpinned and made one adjustment.  Then we folded the project up so I could take it home!

My friend was wearing a t-shirt and when she sprayed she sort of covered her face with the sleeve of the shirt so she wouldn't breath in the fumes.  When I sprayed I just held my breath, it wasn't a problem.  It was easy to control where the spray went.  I think I could really spray inside with open windows and it would be okay.

The brand of spray I used is called 505.  My friend usually uses a brand that she gets from Home Depot made by 3M.  The last time she was there they were out of that brand so she got this kind, she said it worked well for her. The key, she said, was to ask for something that would work with fabric. 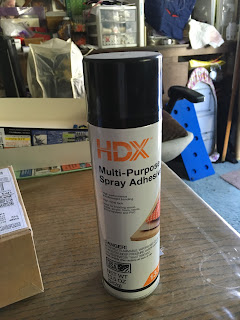 I have the quilt laid out on the table in my sewing room now.

I forgot to keep track of my time on this month's goal.  It was one session to sew the blocks I had already sewn together.  A few hours I think.  Then I thought over night and made the extra blocks.  Could have been 4 to 6 hours, I'm not sure.  It only took about 40 minutes to press the pieces and to do the spray basting.

It was really nice of my new friend to help me out so much.

And super to have the One Monthly Goal to push me along with finishing things up!  If you would like to be in the fun, go to Red Letter Quilts OMG page!