Cozy Quilts is rather near where I live.  In the past I have attended the demonstrations for piecing of her quilts featuring precuts.  Those mornings are fun.  A new friend told me though about the FMQing group and invited me to meet her there.  My first session met on Super Bowl Sunday!

First Daniela (owner of Cozy Quilts) talked about what the group was, and then she showed the video to go with the second month challenge.

The FMQ group will have six monthly challenges and we were asked to practice the monthly design on a folded fat quarter of fabric.  The first design flyer was distributed too, and looked doable.  It's simply a loose loop.

I wasn't there for the instruction on this pattern but found some webpages with help:

This design was as easy way to re-start FMQing.  It's a forgiving pattern, easy enough to do with my sewing ability.  Not one of my favorite ones to do, it's too wandering or something.

Heart FMQing Video - This is the video Daniela showed in the workshop
http://blog.amandamurphydesign.com/free-motion-quilting-ideas-how-to-quilt-hearts-free-tutorial/

Heart Animation of the FMQing that I found
https://www.youtube.com/watch?v=dmbErhF85a4

Cute quilt - was how I found the Amanda Murphy Video!

This design took several sessions for me to complete.  I'm not sure if the fabric I'm sewing on is cotton, it's pretty flimsy, but I'm using the batting I have used before.  The thread kept breaking apart so I switched to a new roll of thread (Aurifil 40 black from LeahDay), then I changed to a new needle.  The thread then was sort of coming unwound and would bunch up on the machine.  So there are a lot of mostly hidden stops and starts.  I added loops to the outside to fill out the fabric with stitches as it was too difficult to get hearts to the very edge.  I'm not sure if my problems were caused by the fabric, the thread, the needle or all by me.  I'll have to sew something else to check things out.

This is a pretty design, but I'm not sure it will be something I do on a full sized quilt as it took so much time to sew!


Some of the Cozy Quilts FMQing members had attended the first month and they were given an opportunity to show their month one FMQing homework, then everyone was able to share any FMQing they wanted to.  The abilities and skill levels vary greatly, but it was very interesting to see. Cozy Quilt coupons toward discounts were handed out for attending, doing homework and sharing. They are cumulative so at the end of the six months one could get a very nice discount (if one could remember to save all the coupons). I think it could go up to 35%!

Also, at the end of the six months, there is going to be a QAYG project that we are supposed to make with parts of the practice pieces.  I'm unclear as I type this what the project will be, but it involves cutting out the best pieces of quilting in each so there is an 8 inch block used from each month and then joining those pieces together to make something. It will be interesting and a new technique, but I hate wasting the rest of the quilting pieces...  : (

Originally I was going to use different pieces of fabric that I had gotten from my once a month sewing together group.  In fact I spent most of last Saturday cutting fabric to make the six sandwiches that I would need for the Cozy FMQing practice and project.

Oh, for the sake of being complete, let me drop back in time. 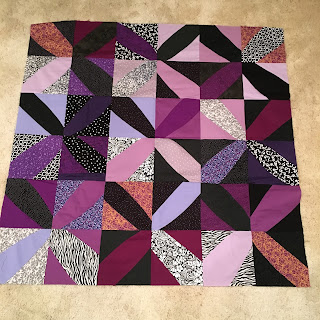 I stayed up late Friday night to finish putting together my Cultural Fusion windmill top, thinking I would then use Saturday for basting it on their terrific tables.  I replicated the order the class had suggested, but now see there are a lot of darks that make a rectangle shape.  I see it but am not going to pick apart.  Next time I plan to remember to convert the photo in grays trick to double check placement of things.

But then I realized that I didn't have the backing planned.  I went thru my fabrics and found the ones I had purchased in NY with the friend who will be receiving the quilt as a surprise gift.  I washed the pieces of fabric, folded them then went to Saturday group.

Discovered once I opened the fabric up that there was a flaw in the piece. I hadn't planned on piecing the back, so discarded the idea of basting the quilt during my group time there. 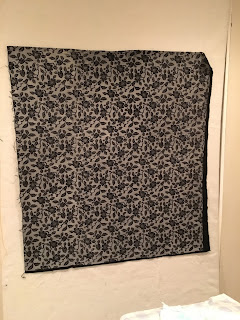 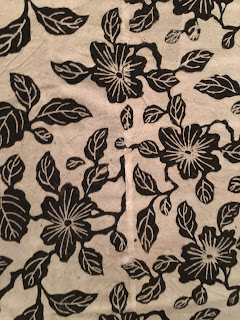 So instead, I spent time putting together fabric for the six sandwiches the Cozy FMQing group. (See I got back to that finally!) Someone in the group had boxes of lovely fabric she was donating, that I picked from to go along with two pieces of patterned pieces I had 'won' from the group.  I cut the batting I had brought for the windmills, and made sandwiches. 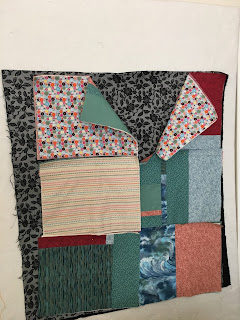 Once I was home though, I didn't like the way the pieces looked together, so decided I could instead use some not quite quilt shop quality cotton fabric that I had picked up from a give away table at adult ed, and then the front and the back for all the practice blocks would be the same. Added: I'm using black thread so I can see what I'm doing and learn from mistakes!

So now I cut that fabric up to make six sandwiches!  I will have the same fabric on both sides, and even have some left over fabric that I can use for binding or sashing if needed.

I put the images of the first two blocks toward the front of this post.  They can be clicked and enlarged to see the stitching. I'll share them at the next meeting as my homework for the group.

So now I need to figure out the backing of the Cultural Fusion Windmill project and get that basted before the end of the month for my February OMG!

I guess I'm skipping the Facets QAL and not sure of the Hazel quilt.  I had fun in Hollywood last week and am having trouble switching back to bookkeeping that I need to do in preparation for the taxes!  I'd better do that before adding any more sewing to my life!

I did finally start an adult education woodworking class - semester long.  So far we have just been learning where things are in the classroom and last Monday (second class) the instructor talked about safety and showed us how to turn on and off a few of the machines.


And on Fridays I'm adding a 30 minute class of Zumba Gold to my schedule!  I've attended a few sessions, fun excuse to meet a friend I do not see very often.  We meet at a library - I was early last week so bought a bunch of books that I hope somehow to read each evening before sleeping!