I've written before how each year for my birthday my husband and son make my Burnt Almond Cake...  My son has finally picked out a cake for us to make for his birthday each year.  Russian Walnut Cake.  We had it one time last year at a restaurant and it stood out for him.  So we found a recipe and made it for the first time this year.

The recipe we used is from Natasha's Kitchen.
https://natashaskitchen.com/2016/12/20/royal-walnut-cake-video-recipe/

We watched the video one time, then worked off the printed recipe.

There are four parts to the cake.

1.  The cake itself.  I hadn't used the food processor in a few years, so it was good that it worked to grind the walnuts.  We weren't sure if the batter was thick enough so after 12 minutes called time and proceeded with the preparation.  I hadn't just used parchment for the bottom of a cake pan before, but it really released the sticky cake once it was baked. Next year we may experiment with putting more walnuts in the batter.  The one in the restaurant had many layers, our recipe only called for two.  Next year we may experiment with cutting things to make more layers.  Usually the parchment paper is pulled away after decorating the cake, this clear cake plate had a lip and the cake was pretty heavy too, so next year need to remember to use 4 or 5 pieces of parchment and a flat cake plate.

2.  The frosting.  This is a cooked buttercream.  I was a little worried about beating the ingredients in the initial step in the pan, perhaps I need to get one with no coating on the inside of the pan...  I still have 1/4 cup of condensed milk.  I'll have to figure something to do with it!  The mixture did not thicken as a cooled.  We carried on with the procedure.  Our gut told us that one cup would not be enough to frost the cake, but we followed directions and it was!  We could experiment with more sugar or walnuts in the frosting next year.

3.  The syrup.  Amazing that the cake would hold the cup of water, 3 T rum and little sugar that we spooned on each layer when we put it on the plate.  Made it very yummy.

4.  The Ganache.  I've not made before.  It was fun.  We probably let ours get a little too firm before applying, but it was delicious. 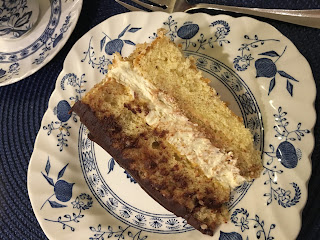 This cake was delicious!  And so much fun to make with all the new procedures. 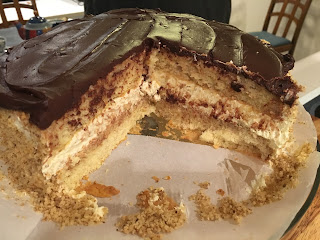 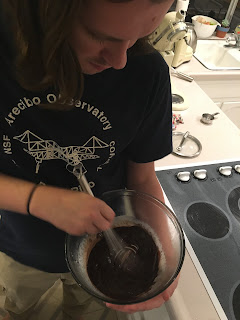 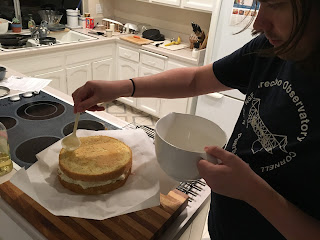 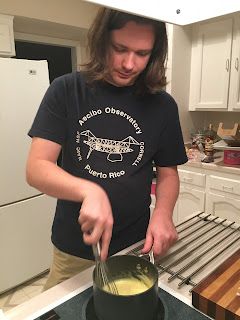 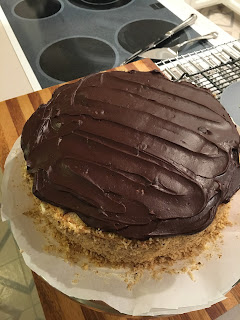