Tumbler Progress: 168 more minutes of sewing plus around an hour more results in 26.5 lines of quilting

You can tell from my blog entries that I have been doing other sewing instead of working on my tumbler quilt! (Pillows, Game boards, Scraps!)

But today I got back to the tumbler for just under three hours of quilting time.  In that amount of time I finished all the second straight lines for the quilt, trimmed the thread and brought the piece downstairs for a photo!
So it took me about six minutes to do each of the straight lines that go across the quilt.  How do I sort of know this?  I set  my phone on the stop watch app and clicked when I finished a line and then started the timer again when the needle was in the down position and in place to start another line for stitching! (So I wasn't counting the time to reorient the fabric to get it ready for the next line of stitching at the sewing machine.)  I'm estimating that took about 2 minutes each time so that's additional hour on the quilt. 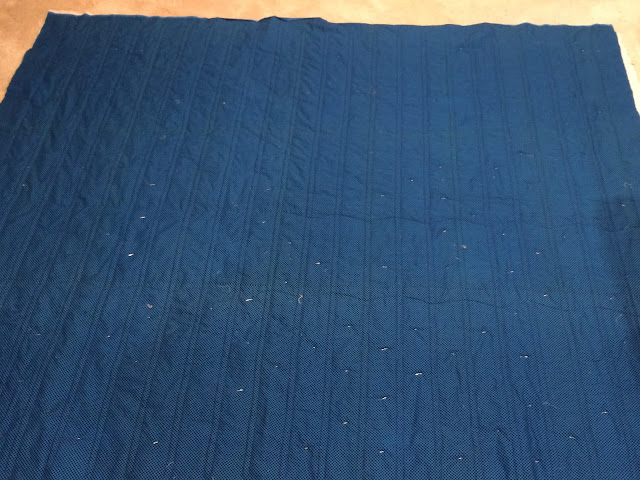 I learned that I should have done all the horizontal lines at the same time.  The first day of tumbler quilting I had started with trying to do some of the angular lines, but when I crossed those lines with the straight stitching, almost every time, there was a bubble in fabric that I had to work to try to flatten.

When I did the orange peel quilt it felt natural to rotate the quilt after each line was completed to add a different color to the quilt from a different direction, but this did not work with the tumbler quilt.

I'm thinking it would have been better to do all the horizontal, straight stitching in the tumbler first.  I'm hoping this will get the fabric so it is very firmly oriented where it's supposed to be in the quilt!

I did what I have done so far by starting in the middle then skipping a few seams and sewing again, then I went back to fill things in so there was one line for each seam. After that I went back and filled in the second lines.  I'm hoping when the piece is finished and washed that the bubble of fabric at these intersections will be more or less unnoticeable.

Gosh, my fingers are crossed that when I do the rest of the angular lines that I will not continue to have the bubbling fabric problem!  If I do, I will change the design of the stitching and will do straight lines coming down thru the middle of the tumbler shapes.  Candace at Saltwater Quilts did this for some of her tumbler quilts.  She posted a photo and wrote: I stitched a fourth of an inch above and below each horizontal seam and through the middle of each of the tumblers. This version of her stitching looks terrific, but I had wanted to do the version she did after this with the lines following all the seams so that is what I am trying for in the tumbler. We'll see what happens with my quilt after the next session of sewing!

I thought I had basted my tumbler project quite snugly and completely.  I taped the backing, the batting and the top down on this huge basting table at the adult education class. Then I used all my pins, but them in all the alternating blocks on the inside and in each of the blocks on the perimeter of the project.  But guess it wasn't tight or often enough to prevent bubbling... or maybe it got loose being basted for almost three years before I started the quilting!

I'm pleased with how the quilt looks so far.
Posted by June D at 1:02 PM