Today my husband and I took a car trip.  We rarely do this, so it was a real treat.  We drove through Ramona to Santa Ysabel and had lunch.  Our original plan was to drive out to the dessert and take photos of wild flowers, but after we had lunch we decided to walk around a bit and then return home.

Here are just a few photos, first outside, then inside for quilts! 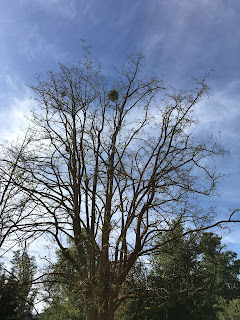 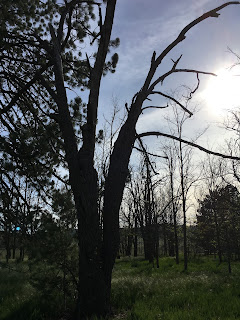 Yesterday was my day for all day sewing with my once a month group.  I brought denim and cut it up to start to make my Play with Me Backgammon block. 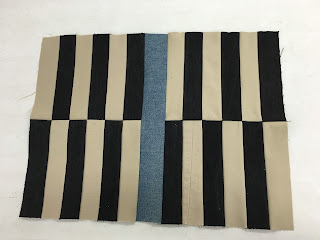 It's supposed to be done using a reverse applique method. So first I cut and sewed the background (that will become the different colored points on the board). Then I put a piece of plain fabric on the top and basted it down. I cut the point patterns out of freezer paper and ironed them down to be sure of the placement of things. (There is blue tape as I folded and cut the points all at one time - I taped the paper to keep it all aligned after the first cut.)  The next step is to sew around each of the points, then to cut away the top fabric to reveal the colored points.
But at this point, my friend noticed that the points were different heights, she thought a real backgammon board had the different colored points being the same height.  She thought I should continue as it was a pattern for the idea of a game board.  But after sewing around two of the points, it was the end of the sewing time so I just pinned the freezer paper down and brought everything home.

When I got back I triple checked and she was right.  The points in a real game board are the same height, and the points touch each other at the side of the board too.

My husband was only really interested in the game boards if they were 'anatomically correct', so I'm going to try to remove the stitching I did and then to redraft the pattern for the points so they are all the same and look more like the ones in the actual board game... 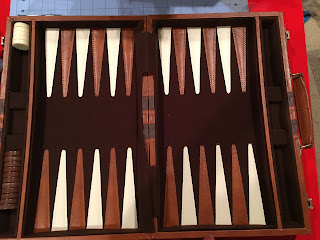 I'll decide then whether I do the points as reverse applique or if I put them on the board and then sew the down with raw edges, or even use the single sided fusible paper method I used for February's Stash Bee block!  It was disappointing to be so near finishing the block and to have the monkey wrench thrown in about how a real backgammon board was designed, but I'm glad my friend noticed it before I started cutting as I might be still be able to use the fabric I had cut and sewn together yesterday.

I had looked at several boards that were for sale online when the pattern was distributed, but I just saw the number of points and the order of the colors, not the shape of the points or their length.  Ah well.

It was nice to take a break from this by doing the drive to the country today.

So next week I'll work on the bookkeeping and the board block!