I'm sewing DH's quilt.  Now I have the parts for the center of the block - but I'm wondering if I should change up the setting.... by having only one row between the black squares instead of two. 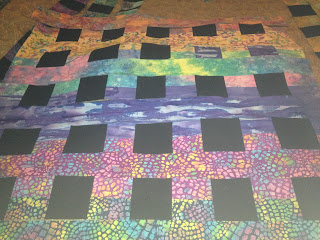 Well, I guess that will be for another quilt as I see I would have to do a lot more cutting...  Just an idea though.  I guess I shouldn't change the block since I'm involving him in the color placement - he has his ideas so I just need to get this done so I can move back to my own ideas!  With this quilt I was letting him pick the colors and placement - then I will get to do the quilting.  I'm already thinking of doing stippling with black thread - it will be nice.

Hmm... If I cut the rows so they were thinner and the black squares so they were large then the black would be the major part of the project and would be nice spot to do FMQing!  For next time.  It would also be fun to arrange the colors so they go from one shade to the other - and to have the squares also change gradually too...  For another time. 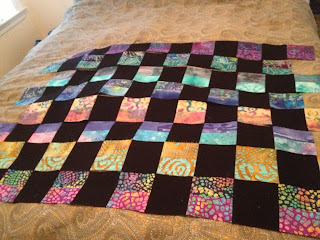 Or here is another possible setting - (I made the mistake of leaving this on the bed and my DH saw and really liked this checker board effect so could be I need to switch so this design is part of the quilt...)  He suggested putting it in the center and having the rest be plain black.....

Here is the original idea - with different colors for the squares - and one modified to show the black squares.