During the September we all work on charity projects.  They are distributed when done to a variety of groups.  The Optimists are the ones that I remember this time since they are the newest ones to benefit.

Previously we had cut fabric and put in zip lock bags with pattern directions...

I picked an easy pattern this time, with just two fabrics. 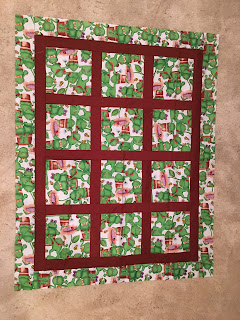 I twisted the fabric around so things were not lined up, and even for the borders twisted the pieces there too.  I hope who ever gets the quilt won't get dizzy!  The fabric came from a company that makes scrubs so the pieces are never width of the fabric long.

I have two other charity tops ready to baste and quilt, so will do the prep for them all the same day.

There was a drawing for fabric and my name was drawn - so I picked the bag of blue fabrics: 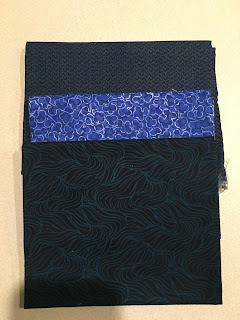 One of the ladies was finishing up a jelly roll race quilt that she made with a small jelly roll: 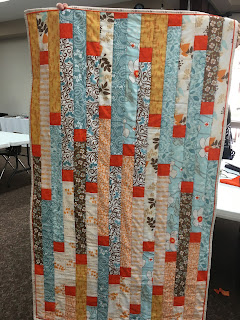 Added 9-24-16:  Here are the directions the lady followed and her note to me:
I actually used one jelly roll, cut each strip in half, mixed them up randomly and then inserted a 2-1/2 square of contrasting fabric between each half strip. Don't forget to cut off some of the first strip.  I looked at a YouTube video which made it very simple...there are several out there.  I hope you have fun with this. 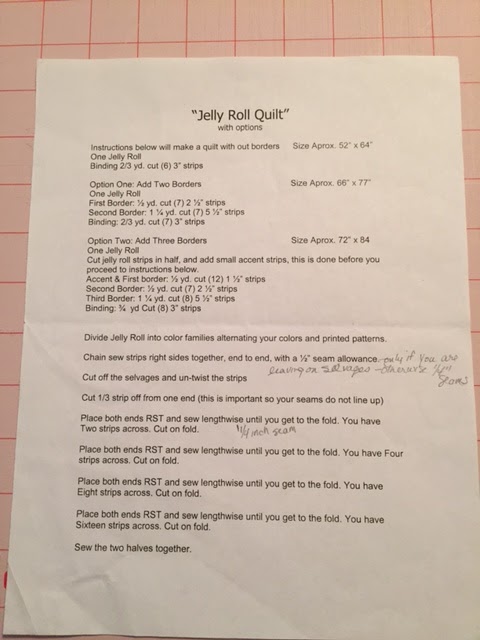 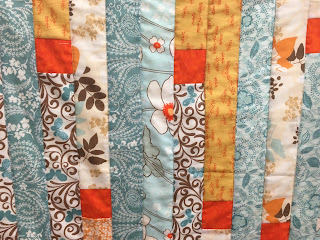 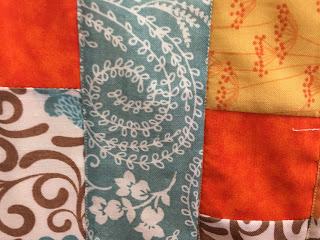 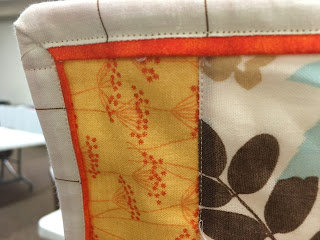 The colors and fabrics were lovely together.  It was nice to see the finished project.  She had taken photos of the fabrics when they were just two strips wide and it went from the front to back of her house.

From what she told me, she first cut the strips in half, then sewed the orange square at the end of each strip.  Then sewed the strips together.  Then cut about a third of the first strip off and found the center of the long strip.  Cut that in half and joined them together.  Repeated a few times until done.  The trick to getting the orange squares to be spread out is the initial removal of about a third of the strip.  If you skip that step then the orange squares sort of line up in all the strips.  (She showed me a photo of one where that had happened.)  I like the random placement the best.  And her colors were so lovely together!

We again made salads for a potluck lunch: 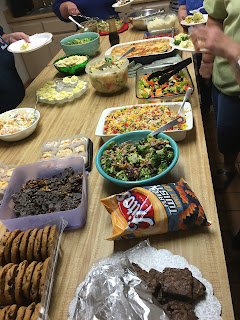 Another quilt top was donated and will be finished by a more experienced quilter - it is much larger than the lap quilts I'm practicing on: 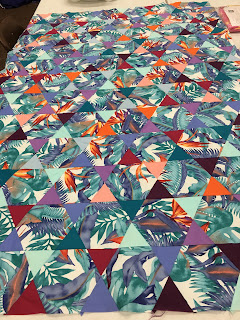