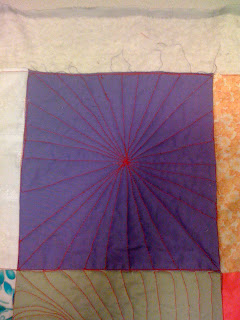 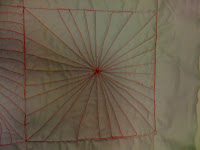 Before:  Hard to believe this one is coded as beginner level  there is alot of moving of the fabric to sew the design.  It will be easier than Hot Coil as it's straight lines....  She gives the advice to slow down when you approach an area that will have a lot of thread build up, as the slower you stitch the less thread is left. So that sounds like a good tip.

After:  This was a pretty easy design.  I messed up a few times in the center and when I was going backwards to do a line I ended up in the wrong area.  It looks pretty nice though.  Would be nice as Leah suggested to use in a holiday quilt.  As I was doing it, I was wishing I had pencils to mark the lines - so that might be something I end up buying....
Posted by June D at 1:10 AM