Round Up Week 16: Pineapple Swap Blocks Done - Except for the Signature!

I finished sewing and trimming the 20 Christmas Swap blocks.  As the title says, I just need to sign them - and then deliver them.  I hope the group will like the blocks I made for the exchange. 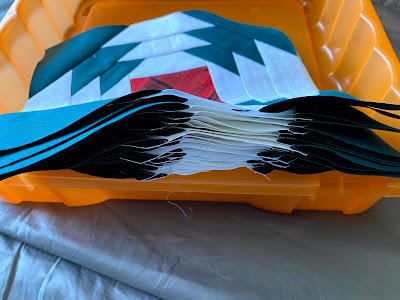 Here they are in my storage box.  Never so full of blocks before! 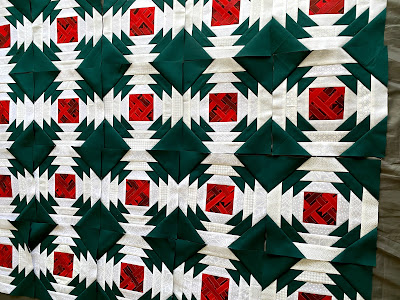 The corner triangles make a large green square on point when put together. 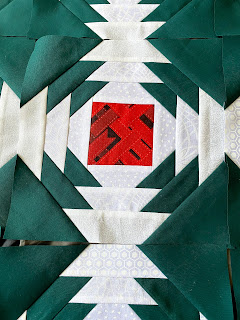 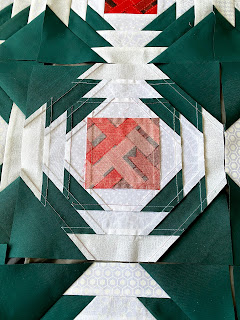 The block is easy to press so the seams are all flat. 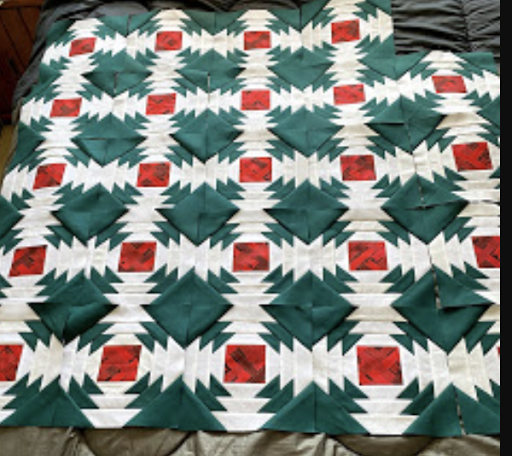 I only need 20 for the swap, but when I cut the center pieces I got 24 of them so decided to make them all into blocks.  The four blocks together actually would be a perfect size for our little dog!

I started putting together my Log Cabin and Power Bar quilt.  It is as I suspected going to be larger than I had wanted it to be.  The class ended this week - we discussed how to do an envelope finish for the quilt, and the next series of classes that will start later in May.  It will be about applique - mostly by hand I think.

Here was the first draft of the layout for my Log Cabin and Power Bar quilt. 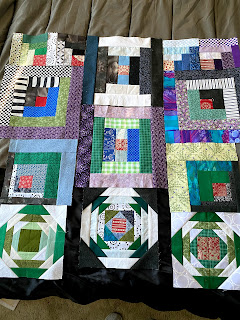 And a more final layout.  I still need to add some strips to make the blocks fit together... 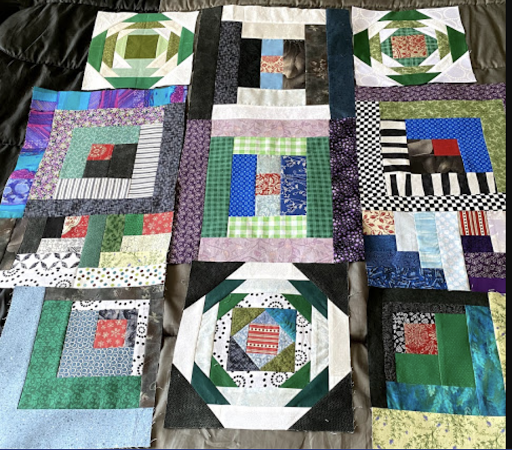 Buffy only needs a quarter of this quilt, and it will be too small to cover us people...  Hmm...
I attended another really nice EBHQ lecture last Monday. Fern Royce's lecture was entitled Making It Up As I Go Along. I wish I had attended her workshops too. Curved Flying Geese, and Working Small.  From the lecture and comments from students who did attend the classes, they sounded right up my alley.
That's it for sewing.
========
Not sewing.  Did exercise, walked and chatted.
Looking forward to zoom wedding in Ireland of cousin's daughter.  Originally we were going to go there to attend the wedding and have fun - but now it's all virtual.  One of my husband's cousin's is organizing a group gift.  She had thought perhaps everyday silverware, I thought perhaps we could go in and pay for a door or front step for the new house they are having built.  But it turns out according to Google a front step would end up being around $6K!  I should have looked that up before making the suggestion.  Tomorrow will call to get things straightened back to the original idea - it was a good one.  Should have kept my fingers quiet and not typed any ideas...  The American cousin organizer is going to have shoulder surgery in the next two weeks (May 17), so I shouldn't have said anything to cost her more time.  I'm planning on making a quilt as a gift just from me - but might be a few years before I get that done...  Also, I'm remembering, need to make an over the shoulder bag in denim for the grandmother.
Added Mon May 3:  Our cousin spoke with the mother of the bride who thought the gift of cash toward something they wanted for the house would be terrific and more preferred than an actual gift.  So we are set to send just about $1000!
Last week, made the meals.  Nothing stands out from last week in that department.
Cleaned a bit.  Started a new box for Goodwill.
Finished reading Orphan of Asia. Sad ending.  Very sad story actually.  Lots to think about...  I bought the book from a store in the bottom floor of Taipai 101 when we were there for a Mother's Day luncheon with my good friend and her husband.  A day or so before the May 12th earthquake!
https://www.youtube.com/watch?v=NYSgd1XSZXc Even though the damper protects the building, I am sure glad I wasn't there on the day of the earthquake!  Article about Taipai 101.
Listening to The Wedding Quilt - one of the last Elm Street Quilt books.  I thought there would be even more than there are.  Never scrolled down when I went to the page with the list of books in order.  Oh well.  Will find another either long book, or series to listen too next.  It's great now that I'm set up to actually be able to hear books while I work on the house or sew.
Chatting with friend who I went to Italy with in 2009 - a memory photo came up on my phone so I sent to her as way of saying hi.  She wrote back that she had fallen last week and now needed surgery on her wrist.  Happening next Tuesday.

Discovered Masterpieces new series, Atlantic Crossing.  We are starting at episode 6...  Then also found these two series to watch too!  World on Fire and Line of Separation.  All about different time periods and points of view on WWII.  I think I clicked to save future episodes...
Taking next week off from exercise sessions so I can hopefully finish the paperwork and get more things cleared out.
Still feeling tired almost all the time.
Posted by June D at 1:24 AM

Do Something Incredible
in 2021!

* AND * If you are a teacher, write, modify or use a WebQuest! Free 30-Day Trial