It's another cute tutorial for a game board this month!  I hadn't seen the layout the way it was in the tutorial, but did remember playing this at Cracker Barrel with our boy so I decided to do that layout triangle for the board instead.

I wasn't sure how the applique would work since I'm sewing on denim...  I tried cutting circle and using the machine to outline using a regular stitch.  Then I tried my new machine with the blanket stitch, after sewing the circle on fusible web then turning it backwards - that took a long time.  Then I thought about and just made a square to keep the fabric down.  I even cut a square and tightened the fabric using a cardboard circle to make the shape - that one I didn't even finish as it was way too bulky and time consuming so you won't see that try!

I finished the board game block though... 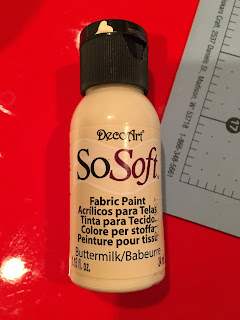 I used tape to mark where the pegs would go.  And just painted them on! 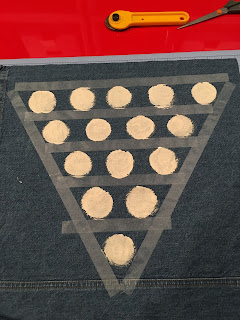 I'm pleased with how this turned out and feel very clever to have found a solution that worked for me.
(I had also thought about sewing large buttons down, but the ones at the store I went to were $4.00 to $9.00 each!)

I will make this into a pillow later this summer.  For now though I have the game board part finished!

My husband even said the pile of dots has some meaning in his fraternity so it will have extra meaning beyond remembering the time at Cracker Barrel when we played the game together with our son!

I'll work on my applique skills later with regular fabric. I just couldn't do it this time. I read a great post by Made by Chrissy D where she shows how she is working on some Sashiko.  She mentions how she thinks it helping her with other hand stitching.  So perhaps I will try that out too.

Anyway, thank you again Alida for organizing the Play with Me QAL where we are inspired to use different techniques to create a game board.

Please click so you can see what folks are doing, and join in!  You'll see some very pretty work done by the others!