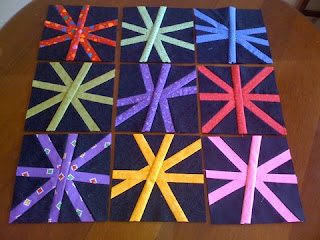 Directions for making the block:
http://blocklotto.blogspot.com/2010/07/fireworks-in-july.html

I again got a sneak preview for the BlockLotto pattern - I actually finished these the last week of June - but am on my honor to not spill the beans on the pattern before Sophie publishes the pattern on the BlockLotto blog so am just now releasing photos of my blocks.

It wasn't until Sophie posted the directions that I realized that she was thinking fireworks - what a clever lady she is!  On other sites this is referred to as * asterisks * - but Sophie realized also that *'s have only three bars....

First I did one block: 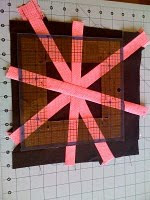 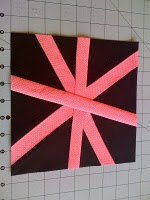 Then I went to my stash to pick out more bright fabrics. I cut the strips then soaked each in water to check for bleeding. After they dried a bit I ironed. I also cut out the background squares. I followed Sophie's directions and started with 10 inch squares (I think 9 inches would be okay with 2.5 inch strips actually).

I did four blocks - then four more and then took these photos after adding the second and third bars... 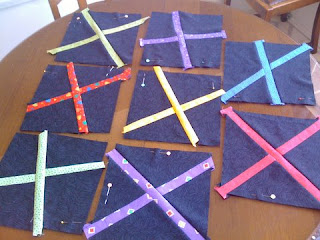 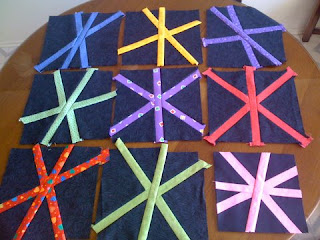 I used pins to show me where the top of the blocks were - helped when using Kona black for the background. I think it would be good to start with more centered first two bars - then to go crazy on the last two...

Fun block to make. I can see lots of possible variations too.  Some of these look like dragon flys instead of fire works...