I've never made a rail fence quilt.  September is charity top day at my once a month group, so since I had found this YouTube, Jordan Fabrics How to Cut A Rail Fence Quilt, I decide to find some fabric and make a top.  Several people were also looking thru the fabric, so I think that part could have gone quicker, but it was nice to chat to folks.  I found four fabrics each about 19 inches wide and started cutting 2.5 inch strips.  I followed his tips and cut several fabrics at the same time.  I subcut those into 8.5 inch strips and got to sewing the blocks.  At the end I needed more of the darker blue.  I was going to use some different fabric, but then I discovered that I could piece together enough to make the final strip.

It felt like I was working rather quickly, but I'm not sure...  I think it took about five hours for me to get this top pieced (including picking the fabric, ironing, cutting, sewing, chatting).  Unfortunately, I did not pick out backing fabric, so I was not able to get the batting for the quilt.  But I'll get that and work on it the next Saturday group that I can attend. Gosh, that won't be until January.  : (  But at least it's a start of a charity quilt!

Since I have more time, think I'll add some borders to make the quilt a little larger than 40 inch square. 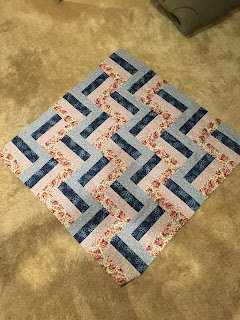 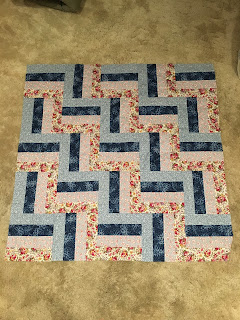